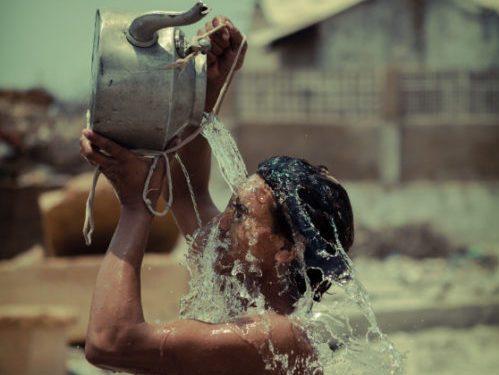 Soil drought could reduce human death rates during heat waves by lowering air humidity, while cooling strategies like wetting surfaces could inadvertently intensify lethal heat stress, according to a new study in the journal Science Advances.

“The potential lethality of heat waves is dependent not only on temperature but also on humidity,” the study explains. So “both increasing temperatures and increasing humidity burden human comfort, psychomedical health, and labour productivity.”

Droughts and heat waves are both becoming more common and intense because of climate change, and are increasingly occurring simultaneously. When that happens, morning dry soils can mildly reduce afternoon heat stress by roughly 5%, the research shows. But some strategies for making heat waves more tolerable and reducing urban heat island effect could create unexpected problems.

“The effectiveness of forestry, urban greening, or misting systems to combat heat stress should be evaluated by considering the influence they have on humidity, not just on [air temperature],” the authors state.

Irrigation, in particular, can increase the human heat burden, the study warns. The effect of irrigation on air humidity is most dramatic in arid regions, because the larger quantities of water needed to reach soil moisture levels lead to a higher amount of evaporation.

“The intensification of irrigation during the past century was recently found to reduce human exposure to hot extremes and was consequently deemed as beneficial for billions of people,” the study says. But “that assessment did not consider the associated increase in humidity.”

The study authors based their model simulations on satellite and weather balloon observations, atmospheric modelling, and meta-analyses of heat wave mortality. “Given the increasing tendency of droughts and heat waves to concur and jointly intensify each other, this understanding of the contrasting effects of soil desiccation—not only through air temperature but also through humidity—can be critical for predicting or mitigating future heat wave lethality,” they wrote.