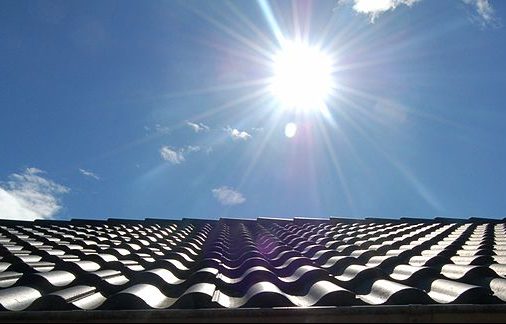 City blacktop, and the tar-and-gravel roofs of many commercial and industrial buildings, could add another 8.0ºC to the most scorching days in the world’s hottest cities by the end of the century, according to Agence France Presse.

Citing a study in the journal Nature Climate Change, the agency reports that the urban heat island effect could exaggerate the global average effects of worst-case climate warming, producing local temperature spikes that imply “dire consequences for the health of city-dwellers, rob companies and industries of able workers, and put pressure on already strained natural resources such as water.”

Research by another group, published earlier this year in the Proceedings of the National Academy of Sciences, warned that “the number of megacities with populations over 10 million in the danger zone” for extreme heat “will double from today” under anticipated global warming, “and the numbers of people exposed to potentially lethal heat stroke and heat exhaustion could reach 350 million by 2050.”

However, that estimate may be low. “Ignoring the urban heat island effect leads to a fairly drastic underestimate of the total impact of climate change,” study co-author Richard Tol, an economics professor at the University of Sussex, England, told Reuters. Slightly more than half of the world’s population—and more 80% of Canada’s—live in cities.

The study did not identify cities by their risk ranking, but “they were likely to be ‘close to the tropics and with the large populations,’” lead author Francisco Estrada of the Universidad Nacional Autonoma de Mexico told Reuters. Cities in colder climates like Canada’s may find the benefits of warming short-lived—perhaps only until the first extra-steamy summer heat wave.

The most extreme potential heating estimates are not certainties. They were based on calculations that assumed a continuing rise in atmospheric greenhouse gases through the century, which is surely not a foregone conclusion. The researchers also noted that cities can limit much of the heat-island effect with such humble adaptations as lighter-coloured asphalt, white-painted roofs, and more urban trees.