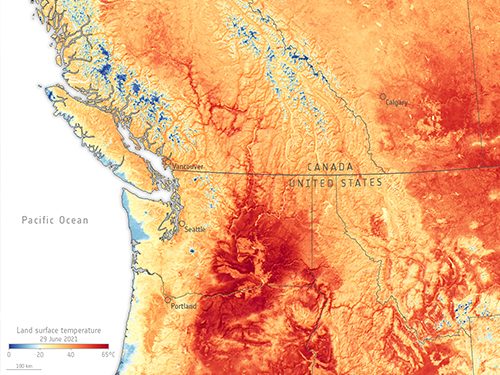 The murderous heat and wildfires that claimed lives and destroyed property in British Columbia and other parts of North America in June, 2021 has hit the global record books. According to a new statistical study, only five other heat waves worldwide since 1960 have been more extreme.

By the end of the century, as global average temperatures continue to rise, there could be one chance in six that such record-breaking, potentially lethal heat extremes could be expected in that region of western North America in any year.

And British researchers have a further surprise in the journal Science Advances. Although the thermometer hit 49.5°C in Lytton, British Columbia on June 29, according to their reasoning, even more extreme heat occurred the next day in northern Alberta, with Fort McMurray International Airport registering a temperature of 40.1°C. Using their own methodology, the researchers calculated a peak of 36°C over a larger measured grid region of Alberta on June 30 and even this—compared with the 22°C seasonal norm that local people had grown to expect—proved so extreme as to enter the global record books.

By comparison, Lytton, B.C.—by that time in flames—had scored a smaller standard deviation of just 4.01 the day before.

“The recent heat wave in Canada and the United States shocked the world. Yet we show there have been some even greater extremes in the last few decades. Using climate models, we also find extreme heat events are likely to increase in magnitude over the coming century—at the same rate as local average temperature,” said study lead Vikki Thompson, a climate scientist at the University of Bristol.

“At the end of June, 2021, an area of high pressure sat over British Columbia for several days,” she added. “The whole month of June had been exceptionally dry in the area—the driest in our 70-year record. This meant any heat went straight to heating the air, not evaporating water on the surface, leading to the intense heat experienced in places like Lytton. It also made conditions ideal for wildfires—as was seen in the days following the heat wave.”

The point of research of this kind is to show that extremes can happen almost anywhere, and populations that aren’t ready for unprecedented temperatures are likely to be the most vulnerable. The new table of hottest-ever dates and locations compiled by the Bristol study puts a more or less unreported high of 32.8°C in April 1998 in Southeast Asia at the top of the list, followed by a similarly unremarked peak of 36.5°C in Brazil in November 1985, and the 38.4 °C in southern United States in July 1980.

These were all dramatic enough departures from the local mean temperatures over the preceding decade to make history.

Except, of course, that some of these heat extremes didn’t make history at all. Having more or less invented a new category of heat wave—the “remarkable extreme” event—the researchers had to also classify a series of “infamous events.” And these, among them the devastating 2003 heat wave in Europe that claimed tens of thousands of lives in France and Spain, don’t necessarily make the new international hottest-ever league table because they were memorable for their impact, rather than the level of variation from normal temperature patterns.

“The western North American heat wave will be remembered because of its widespread devastation,” said Thompson. “However, the study exposes several greater meteorological extremes in recent decades, some of which went largely under the radar, likely due to their occurrence in more deprived countries. It is important to assess the severity of heat waves in terms of local temperature variability because both humans and the natural ecosystem will adapt to this, so in regions where there is less variation, a smaller absolute extreme may have more harmful effects.”

Once again, the research underscores what should be obvious: that as global average temperatures rise as a consequence of human use of fossil fuels, so too will the likelihood of devastating extremes of heat. It also is a reminder that such a hazard cannot be separated from other factors, such as local winds and air pressure, humidity, rainfall, and so on, nor the preparedness of the local people.

But simultaneous episodes of heat and drought are becoming more likely. High ambient temperature levels combined with increasing humidity can quite literally kill. And more extremes are on the way.

“Climate change is one of greatest global health problems of our time, and we have shown that many heat waves outside the developed world have gone largely unnoticed,” said study co-author Dann Mitchell, professor of climate sciences at the University of Bristol.

“The country-level burden of heat on mortality can be in the thousands of deaths, and countries which experience temperatures outside their normal range are the most susceptible to these shocks.”

Montreal Sets Zero-Emission Target for All New Buildings by 2025