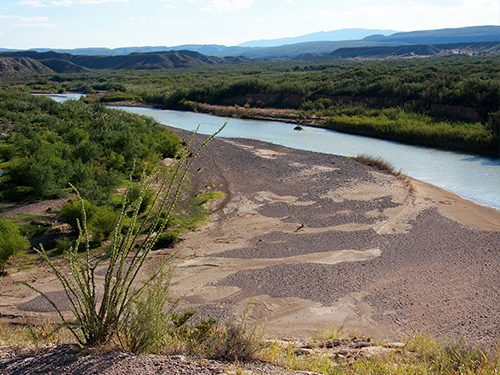 The climate crisis is exacerbating long-standing tensions over water rights between Mexico and the United States—tensions that exploded last month to lethal effect when Mexican national guardsmen killed a young farmer.

Jéssica Silva, 35, was participating in a farmer-led takeover of the Boquilla Dam in the Mexican state of Chihuahua in September when she was shot by a member of the country’s National Guard, reports the New York Times.

Ambushing the soldiers guarding the dam with nothing more than rocks, sticks, and homemade shields, the farmers took over and occupied the structure, and have since refused to let any water through into the United States.

For lawmakers anxious to enforce a “decades-old treaty that compels the United States and Mexico to share the flows of the Colorado and Rio Grande rivers, with each side sending water to the other,” the standoff is a problem, writes the Times. Among those anxious to implement the treaty is Mexican President Andrés Manuel López Obrador, who “has vowed that his country will make good on its water obligations to the United States—whether the state of Chihuahua likes it or not.”

Also pushing for an end to the Boquilla standoff is Texas Governor Greg Abbott (R), who last month appealed to Secretary of State Mike Pompeo “demanding that he persuade Mexico to deliver the water by the deadline next week, or risk inflicting pain on American farmers.”

But pain is what has brought the farmers of Chihuahua to the breaking point, and to the point of breaking the law. And while cross-border tensions have long existed, the ultimate driver behind the current standoff is the climate crisis, said Christopher Scott, professor of water resources policy at the University of Arizona.

Suffering through the worst drought in three decades, Mexico is hugely behind on its water shipments to the U.S., and making up the shortfall (50% of its average annual payment in a few short weeks) will largely fall to Chihuahua and the Boquilla Dam, which spans a major tributary of the Rio Grande, writes the Times. That leaves the state’s farmers fearing that “losing any more water will rob them of a chance for a healthy harvest next year.”

That reality has led activists to do more than occupy a dam, adds the Times. “Activists in Chihuahua have burned government buildings, destroyed cars, and briefly held a group of politicians hostage,” it explains. “For weeks, they’ve blocked a major railroad used to ferry industrial goods between Mexico and the United States.”

For its part, the Obrador government is arguing “that the protesting farmers are also hurting other Mexicans by preventing water from flowing to their compatriots downstream, and that the growers would still have access to at least 60% of the water they need for next year.”

A likely outcome of the standoff is that Mexico will hand over a significant amount of the water it holds in reservoirs—water that is normally used by more than a dozen of its cities. “In exchange,” writes the Times, “Mexico has asked the United States to lend it drinking water for those cities, if Mexico ends up running out.”