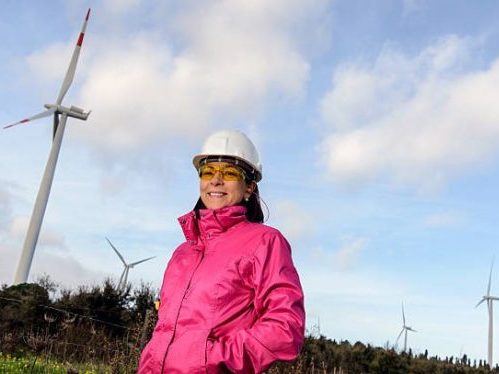 “Economists are calling this the first ‘she-cession’, given the high proportion of job losses in female-dominated service sectors,” Irwin writes in a recent blog post. “With the spread of the COVID-19 pandemic, even the limited gains made in the past decades are at risk of being rolled back as a result of social, political, and economic impacts that the pandemic is having on women and girls.”

That points to a specific challenge for Irwin’s sector, with “under one-fifth, or 18% of the Canadian energy efficiency work force reported to be female, making our sector less diverse than the national average,” she adds. “While there’s no denying that the efficiency sector has some big improvements to make to close the gender gap, I choose to see this as a great opportunity for other women to enter an untapped sector.”

Taking action on that opportunity begins with role models, and Irwin points to several of them—including the near-gender parity in the senior ranks of the country’s leading energy efficiency program administrators and utilities. But “as we continue to build our economic recovery, we must also seize the opportunity to create a more equitable and inclusive workplace.” Irwin cites child care, paid sick leave, and family leave as “enabling conditions” that would bring more women into the sector, along with policy supports for women entrepreneurs in an industry that consists largely of small businesses.

Efficiency Canada has also been emphasizing trades training for women as a way to “provide higher paying and more secure employment for those who have lost their jobs,” Irwin writes. “Attracting women to these jobs will go a long way for Canada’s economy as a whole, as there aren’t enough skilled workers in Canada.”

The skilled trades “offer well-paying jobs, when compared to existing female-dominated low-paying jobs, such as retail, hospitality, care, or administration work,,” she adds. “Increasing women in trades also helps to combat the consequences many women face with part-time and temporary work, such as few or no benefits, few opportunities for advancement, and greater risk of poverty. Draws of the trades professions include instant work and earning while you learn as an apprentice.”

Irwin says Efficiency Canada isn’t alone in its mission to advance gender equality: The Clean Energy Ministerial recently celebrated the second anniversary of its Equal by 30 initiative, which now has about 145 signatories ranging from businesses to countries.