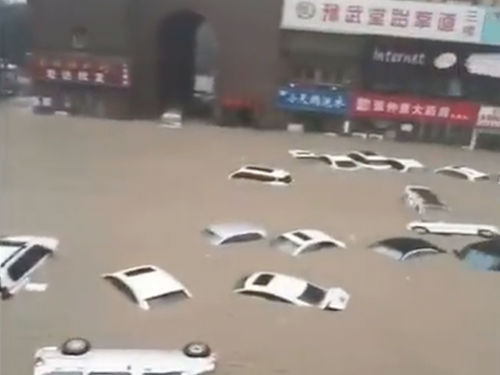 Early 2023 has been a rollercoaster ride for climate watchers: from relief that worst-case climate scenarios are no longer conceivable, to apocalyptic warnings that we could be headed for at least 7°C of warming, to hope that “super-tipping points” of climate action will soon galvanize rapid decarbonization, and concern that El Niño will return with unprecedented heat waves this year.

Graham Lawton, staff environmental writer for the New Scientist, declared last week that whereas “10 years ago there was a genuine fear that we were heading for catastrophic warming of between 4° and 5°C by 2100,” those “worst-case scenarios are no longer plausible.”

It was the wide dissemination of the so-called “business-as-usual” (BAU) climate scenario that raised and maintained the spectre of 4°C+ global heating, Lawton says. First proposed by the Intergovernmental Panel on Climate Change in 2014, the BAU scenario assumed no climate action whatsoever, with fossil fuels burning unabated out to 2100.

But now “progress on renewable energy technology and implementation of climate policies have bent the emissions curve downwards towards warming of around 3°C by the end of the century,” Lawton says, producing a trajectory for global heating that is “still dangerous, but not hellish.” (Though even the 1.5° target for climate stabilization—or today’s average warming of about 1.1°—are both hellish enough in their own right.)

“If countries achieve the net-zero pledges that they have already put on the table, warming will stay under 2°C,” he adds, citing a recent webinar produced by the American Geophysical Union (AGU).

Unfortunately, “according to the CAT’s ‘good practice’ net-zero analysis, the design of net-zero targets covering a total of 74% of global emissions remains insufficient,” a reality that puts countries “a long way from converting net-zero targets into policies and actions that will result in real-world emissions reductions.”

Last week, however, the World Economic Forum (WEF) reported that those pledges will get a whole lot easier to fulfill should “relatively small policy interventions on electric cars, plant-based alternatives to meat, and green fertilizers” be deployed, writes the Guardian.

The WEF says all three technologies are close to “super-tipping points” which could supercharge their growth, with powerful knock-on benefits in other sectors, adding up to a 70% cut in global emissions.

These market-based “super-tipping points” occur “when a zero-carbon solution becomes more competitive than the existing high-carbon option,” the Guardian explains. At that point, “more sales lead to cheaper products, creating feedback loops that drive exponential growth and a rapid takeover.”

And the spillover effect into neighbouring sectors is projected to be huge, with exponential growth in electric vehicles, for example, leading to cheaper batteries overall, which will be a boon to solar and wind power and storage systems, and to the growth of renewables overall. The surge in green energy will mean lower electricity bills, which will make critical climate tools like heat pumps more affordable.

As for replacing meat and dairy—currently the source of 15% of global emissions—with plant-based alternatives, the WEF says a 20% market share for alternative products by 2035 would allow 7% to 15% of the world’s farmland to be turned back to carbon-sequestering forest and wildland.

Such “positive socioeconomic tipping points,” and “the non-linear ways” of thinking and acting that will get us there, offer plausible grounds for hope, said WEF report co-author and University of Exeter earth system scientist Tim Lenton.

More Warming ‘In the Pipeline’

But even as extreme climate scenarios lose ground, there are still shadows, Lawton says. The “apocalyptic” BAU scenario is “obsolete” and should be pulled out of circulation lest it become fodder for climate deniers, but “there are still big unknowns about how the climate system as a whole responds to emissions.”

Here Lawton acknowledges climate scientist Zeke Hausfather’s caution, delivered during the AGU webinar, that emissions are only part of the picture of what happens next. If humanity “rolls sixes” on the other two elements of our climate future—the Earth’s climate sensitivity, and climate feedbacks—global heating could yet move back into the “hellish” terrain of 4°C, he warned.

Former NASA scientist and veteran climate hawk James Hansen and his research team have been running the numbers on paleoclimate data. According to a pre-print of their findings, which were awaiting peer-review in December, there could be enough “warming in the pipeline” to generate 7° to 10°C of global heating, depending on what happens with atmospheric aerosols, reports Daily Kos. Those are the levels of heating Hansen projects once all climate feedbacks, including the “long-term” ones, have played out.

The analysis begins with the expectation that the Earth’s short-term response to a doubling of atmospheric carbon dioxide (known as Earth Climate Sensitivity, or ECS), widely pegged at approximately 3°C, would actually reach at least 4°C.

Hansen also calculates that while atmospheric carbon dioxide has increased by 50% since pre-industrial ties, the amount of climate forcing from methane, nitrous oxide, water vapour, and all other greenhouse gases delivers the equivalent of a doubling of CO2.

The upshot? The heating potential already in the atmosphere means that even if climate forcing stabilizes at today’s levels, we are in for between 6° and 7°C warming by 2100 if countries stop trying to eliminate toxic, but also heat-reflecting, human-made aerosols from the atmosphere—and a whopping 10°C if we push ahead with clean air protocols.

While Hansen and his team are focused on what could happen by the end of the century, other climate scientists are warning that the Paris Agreement target of 1.5°C could slip out of reach as early as 2028, as researchers eye the anticipated return of El Niño later this year, following an unusual three-year run for La Niña.

The oscillating El Niño-La Niña phenomenon is “the biggest cause of year-to-year differences in weather in many regions,” the Guardian explains. In La Niña years, “the east-to-west Pacific trade winds are stronger, pushing warm surface waters to the west and drawing up deeper, cooler water in the east,” a pattern which tends to keep a lid on global heating. By contrast, “El Niño events happen when the trade winds wane, allowing the warm waters to spread back eastwards, smothering the cooler waters and leading to a rise in global temperatures.”

Later this year, El Niño will cause global temperatures to rise “off the chart” and deliver unprecedented heat waves, scientists have warned. “It’s very likely that the next big El Niño could take us over 1.5°C,” Prof. Adam Scaife, the head of long-range prediction at the United Kingdom Met Office, told the Guardian.

“The probability of having the first year at 1.5°C in the next five-year period is now about 50:50.”

Just how big the next El Niño will be remains uncertain. “Many seasonal forecast models are suggesting the arrival of moderate El Niño conditions from summer 2023,” said Andrew Turner, professor of monsoon systems at the University of Reading. Early summer will bring greater certainty about what lies ahead, with the picture becoming much clearer by June.

Even a “moderate” El Niño will bring misery to hundreds of millions, with parts of Asia and Australia left parched and sweltering while other regions, like the Yangtze basin in China, are hammered by torrential rains. More drought will be in the cards for the already dangerously dry Amazon, for Southern Africa, and also for India, where El Niño tends to suppress monsoon rainfall.

Given the reality that so many complex Earth (and human) systems remain so opaque to science, an international team of earth system analysts and climate policy experts is urging a methodological shift to emphasize worst-case climate outcomes—an area of research they say remains systematically under-studied. The researchers set 3°C by 2100 as their “marker for extreme climate change,” partly because there are “substantially heightened risks of self-amplifying changes that would make it impossible to limit warming to 3°C, and these levels relate to far greater uncertainty in impacts.”