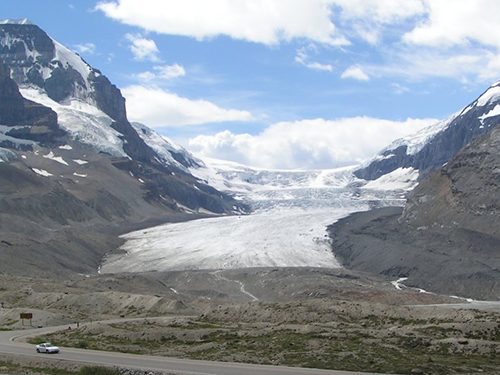 Even at 1.5°C of warming, half of the glaciers on Earth will disappear by 2100, says a groundbreaking study just published in the journal Science.

The findings have frightening implications for freshwater supplies. In the abstract of the study—a global first in its scope and level of detail—the authors point out that nearly two billion people and countless other species depend on mountain glaciers for drinking water and irrigation. Mountain glaciers hold 75% of the freshwater on Earth.

As well, in losing a quarter of their mass by 2100 under 1.5°C warming, melting mountain glaciers will contribute at least 90 millimetres to global sea level rise.

The shocking study led by an international team of glaciologists from Austria, Canada, France, Norway, Switzerland, the United Kingdom, and the United States used high-resolution modeling to predict how each of the world’s 215,547 glaciers will respond to a range of warming scenarios.

With humanity currently on track for 2.7°C warming based on climate pledges made at the COP 26 climate summit in Glasgow, the authors warn that this trajectory will lead to “the near-complete deglaciation of entire regions” by the end of the century. In this scenario, the Swiss Alps, the southern Alps of New Zealand, and the Rockies, as well as many smaller mountain ranges like the Purcells in southern British Columbia, will be left permanently barren of ice, according to the study.

Lead author David Rounce, an assistant professor of glaciology at Carnegie Mellon University, stressed another key finding: that the loss of glacial ice mass through melting is directly related to temperature increase. “Any reduction in the temperature increase will considerably reduce glacier melt loss and its contribution to sea level rise,” he said.

The study points to the incalculable existential and cultural losses that will attend the vanishing of so many mountain glaciers, especially those long considered sacred like Peru’s Colquepunco, the Meili Snow Mountains in China’s Yunnan province, and the many glaciers in the Himalayas.

Prof. Elizabeth Allison, chair of ecology, spirituality, and religion at the California Institute of Integral Studies, said countries must recognize and prepare for the profound spiritual shock that will accompany the loss of the glaciers, especially for Indigenous communities that have lived for millennia in their shadow.

“Throughout the world, glaciated mountains are sacred to people living nearby,” Allison she told Carbon Brief. Those communities “will undergo profound and unprecedented social, cultural, and spiritual change as mountain-dwelling gods and their blessings are perceived to depart from these icy domains.”

That means “adaptation and mitigation planning must include responses to address such psycho-social disruptions,” she added.

At 4°C warming, 83% of the world’s glaciers would vanish. Losing upwards of 40% of their mass, these crumbling cathedrals of ice would contribute another 64 millimetres to global sea level rise.