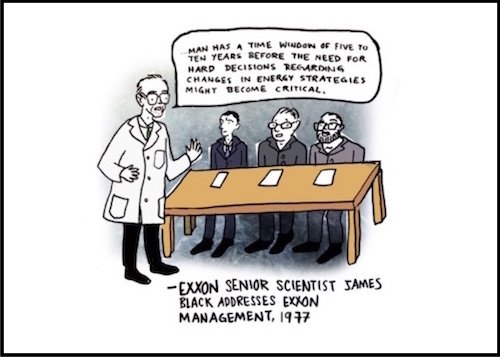 The analysis “allows us, for the first time, to put a number on what #ExxonKnew: that burning coal, oil, and gas was going to heat the planet by 0.20° ± 0.04°C every decade. And they were right on the money,” tweeted lead author Geoffrey Supran, professor of environmental science and policy at the University of Miami.

The study builds on discoveries by investigative journalists at Inside Climate News in 2015, which revealed internal company memos indicating that Exxon understood the risks of climate change from burning fossil fuels as early as 1970. While those investigations focused on the text of the documents, no prior study had systematically reviewed the numerical and graphical information in the climate modelling projections.

To determine the accuracy of Exxon’s predictions, the researchers reviewed all known climate change projections—including 32 internal documents and 72 peer-reviewed publications—produced by company scientists for Exxon and, following a 1999 merger, for ExxonMobil. Then they compared the projections with academic and government research and observed temperature measurements for those years.

The new findings show that the company’s predictions reasonably align with both—63% to 83% of the Exxon scientists’ climate projections accurately predicted subsequent global warming of 0.20°C ± 0.04°C (about 0.2°C) per decade. So that the companies’ projections were “within uncertainty, the same as that of independent academic and government projections published between 1970 and 2007.”

The Exxon scientists also accurately predicted that human-caused global warming would first be detectable within five years of 2000, and reasonably estimated how much carbon dioxide would lead to dangerous warming.

William D. Collins, who leads the Climate & Ecosystem Sciences Division at Lawrence Berkeley National Laboratory and was not involved in the study, described the analysis as “very sound,” reports the New York Times.

The study will have important implications for ongoing lawsuits intended to hold fossil fuel companies legally accountable for their role in the climate crisis.

The researchers also compared the Exxon research to company PR at the time. Despite the company’s data confirming the potential for human-caused global warming, its public statements talked down climate models’ reliability and emphasized the uncertainty of scientific conclusions.

In late 2021, during a U.S. House subcommittee hearing about whether oil companies misled the public, Exxon CEO Darren Woods said the company’s positions released over the years were “entirely consistent” with the scientific consensus of the time, the Times writes.

Woods’ claim does not align with the findings presented in the new study.

“We now have airtight, statistically rigorous evidence that Exxon accurately predicted global warming years before it turned around and publicly attacked climate science and scientists,” Supran tweeted. “In that sense, this graph doesn’t just communicate a crisis, it confirms complicity.”

An ExxonMobil spokesperson responded that “this issue has come up several times in recent years and, in each case, our answer is the same: those who talk about how “Exxon Knew” are wrong in their conclusions.”