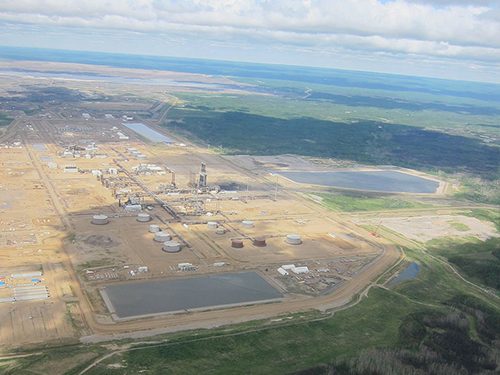 Suncor Energy and a subcontractor faced 28 charges for safety violations after a bulldozer crashed through thin ice on a frozen tailings pond in January, 2021, killing 25-year-old operator Patrick Poitras. “Someone didn’t do their job and I lost my son because of that,” his dad told CBC. “My son gave his life for that job.”

Alberta environment minister and former pipeline executive Sonya Savage insisted that Ottawa address the substance of the transition off fossil fuel dependency by renaming it something other than a “just transition”, Premier Danielle Smith wouldn’t commit to invoke her province’s wacky, new Sovereignty Act to combat the term, and 350.org told Savage to stop trying to scare people. “The fact is a strong majority of Canadians want bolder action from governments to speed up the necessary shift to clean energy and to make sure no worker or community gets left behind in the process,” the group said.

San Francisco was in the cross-hairs of California’s devastating rainstorms, as a five-year-old boy was swept away and thousands of people evacuated in the face of heavy rains, flooding, and mudslides. Coastal residents in North Carolina’s Outer Banks realized that “the ocean’s coming for you” after seeing some shorelines retreat more than 200 feet (60 metres) in two decades.

The late December cold snap in Texas resulted in an extra 2.4 million pounds of industrial pollution, with Gulf Coast fossil operators accounting for the highest volume. Great Salt Lake was five years away from going dry, polar bears around Churchill, Manitoba were declining faster than expected, and ocean temperatures surged to another record high in 2022. A photo essay documented the aftermath of a devastating wildfire in Vina del Mar, Chile. The ozone layer was still on track to recovery.

A study found green industries could be worth US$10.3 trillion by 2050, and departing UN climate champion Nigel Topping said net-zero is still achievable in the 2040s. China was speeding up wind and solar deployment to hit its 2030 target ahead of schedule, and a team at Shenzhen University and Nanjing Tech University built a new electrolyzer to split seawater into hydrogen.

A pathway opened up for the city council in Windsor, Ontario, to stop a proposed new gas plant. Climate activists in Germany dug in to defend the permanently abandoned hamlet of Luetzerath from demolition, with some of them prepared to risk their lives to stop the new coal mine slated to replace it. New fossil gas terminals under construction portended health and environmental risks for communities along the U.S. Gulf Coast.

Canada extended its restrictions on offshore drilling in the Arctic, and Norway announced $30 billion in new projects to keep fossil gas flowing through 2026. Qatar and Chevron earmarked $6 billion for a new gas-to-plastics plant, North Carolina adopted a carbon plan that favours gas over solar+storage, and an analysis by Transport & Environment showed fossil companies investing eight times more in biofuels than in hydrogen. Consultants at Wood Mackenzie said 2023 could be the breakout year for carbon capture, utilization and storage, and the cement industry looked at how to abate greenhouse gas emissions that account for about 7% of the global total. Former UK climate minister Claire Perry O’Neill lavished praise on Labour Party leader Keir Starmer’s “sober” and competent” leadership and scorched her former colleagues’ “often cavalier approach”.

The International Monetary Fund thought about how economies can do a better job of gauging climate risk, researchers said the combination of drought and heat can threaten “socio-ecosystem productivity”, and modern monetary theory didn’t do a half-bad job of helping Canadian households weather the pandemic when the government introduced the Canada Emergency Response Benefit in 2021.