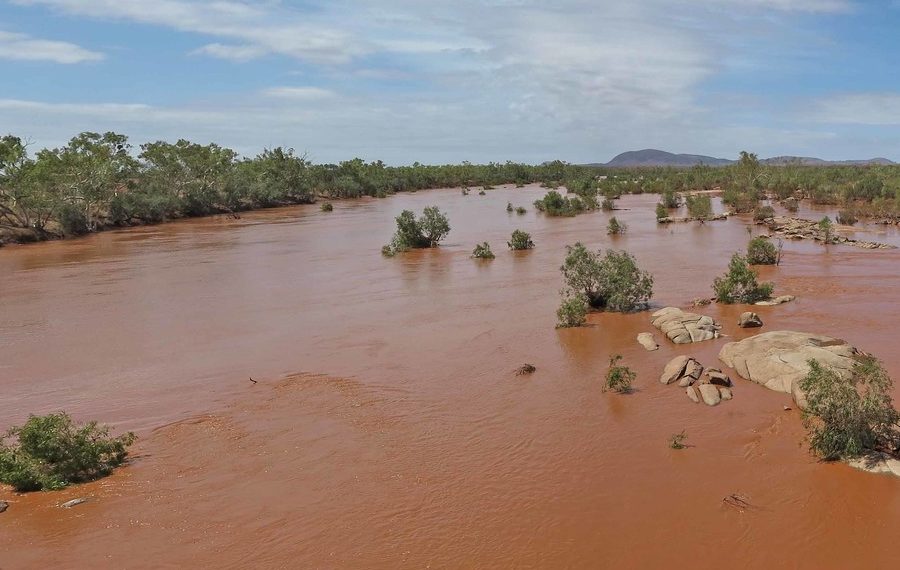 This story includes details on the impacts of climate change that may be difficult for some readers. If you are feeling overwhelmed by this crisis situation here is a list of resourceson how to cope with fears and feelings about the scope and pace of the climate crisis.

As “once in a century” flooding in northwestern Australia overruns roads—straining food supply chains and isolating communities—experts and industry groups say the country’s freight transport networks must be made more climate resilient.

“Flooding on a scale never seen before in the Kimberley region of Western Australia is expected to leave parts of the area cut off from the rest of the state for almost another week,” reports Australia’s SBS News. Supply chain experts have warned that with extreme weather becoming more common, it’s time to think beyond Australia’s conventionally lengthy supply chains, where processed and packaged food is trucked throughout the country from afar,” often in refrigerated trucks.

Such recommendations come nearly 10 years after a study of Queensland’s devastating 2011 floods confirmed that heavy reliance on long supply chains and the “relative lack of local, alternative, food distribution channels” contributed heavily to food insecurity during that crisis.

Fallout from the “Black Summer” bushfires in 2019-2020 once again proved the need for local food production and distribution. The fires that raged across the 200,000-square-kilometre Nullarbor Plain in southern Australia “closed the only sealed road between South Australia and Western Australia for 12 days,” SBS writes.

This week, officials in Western Australia said heavy rain from former tropical cyclone Ellie led to “once in a century” flooding, covering some places in water “as far as the eye could see,” reports Reuters.

“The water is everywhere,” said the state’s emergency services minister Stephen Dawson, with inundation in some areas stretching for 50 kilometres.

Of all Australia’s states and territories, Western Australia is the most susceptible to supply chain interruptions due to climate affects, explained Liz Jackson, associate professor of supply chain logistics at Curtin University.

“Western Australia is about the end of the line when it comes to even the global freight link,” Jackson told SBS News. “The idea that we have one road and one railway line for all intents and purposes out [of Perth] is pretty worrying.”

Both Jackson and Dumesny recommended more cold-storage warehouse facilities around the country as one way to build resilience into food distribution networks. Dumesny also suggested building more roads, which would provide alternate routes to get food to the table when primary arteries are impassable due to fire or flood.

In Canada, residents in the southern interior of British Columbia will remember their own experience with broken supply chains in 2021, when the mammoth atmospheric river that washed ashore that November killed at least five, devastated prime agricultural land, and left critical road and rail arteries severed for weeks.

Regarding her inundated community with grief and dismay at the time, and identifying global heating as the cause of the destruction, Abbotsford resident Nora Weber told CBC News that “every city in every part of B.C. has to be much better prepared.”