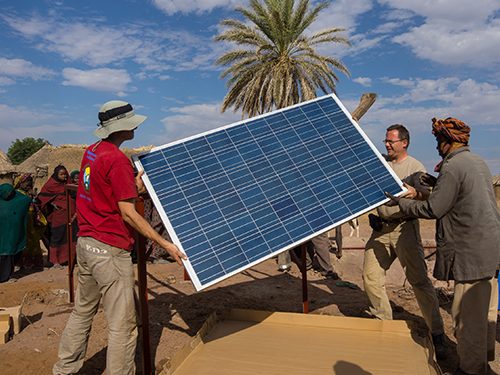 Prime Minister Justin Trudeau is signalling a shift away from humanitarian aid toward funding infrastructure projects in developing countries.

“A lot of it is less around humanitarian development, in my conversations with the Global South, and much more about, well, how can you create investments in renewable energies that’s going to last the next 20 years?” Trudeau told The Canadian Press in a year-end interview.

“How are you going to build resilient infrastructure that’s not going to be wiped out by the next hurricane or landslide or heavy rains, or whatever it is?” Trudeau continued.

“These conversations are shifting, but we’re going to continue to very much be present in investments in the Global South.”

Canada’s humanitarian aid sector is closely watching next spring’s budget, to see how the Liberals interpret their own commitment to keep raising humanitarian spending each year.

The Liberals have held that promise since taking office in 2015, and Trudeau instructed International Development Minister Harjit Sajjan a year ago to “increase Canada’s international development assistance every year.”

The Liberals had earmarked an annual C$6.6 billion in aid before the COVID-19 pandemic. They boosted that target beyond $8 billion, initially for programs related to fighting the impacts of COVID-19 and then to help Ukraine and its neighbours.

With Ottawa warning of a possible recession, the sector is unclear whether the Liberals intend to use the pre-pandemic spending as their benchmark.

There is a hope they will instead top up the more generous baseline.

“The feminist policy that the Trudeau government has put in place is having a great impact, but we need to keep going,” said Louis Belanger, a former Liberal staffer who now advocates for Canadian humanitarian groups through the group Bigger Than Our Borders, which is backed by major charities.

Aid groups and development banks are particularly concerned about western countries diverting their traditional grants to help Ukraine cope with the impact of Russia’s February invasion.

“We need to keep going, and not go backwards,” he said. “So it’s worrying to hear that there may be a trend backwards, instead of going forward.”

Yet Trudeau said leaders of developing countries have been asking him less about humanitarian aid and more about investments in projects that will last decades, such as renewable energy and bridges or roads that can withstand hurricanes or landslides.

He said the West heard a wake-up call following Russia’s invasion of Ukraine, when countries like Canada asked developing countries to isolate Russia. Trudeau summarized the response as: “They’re the only ones showing up to invest in our infrastructure.”

In June, G7 countries pledged to invest US$600 billion in the Global South, with a focus on climate-resilient infrastructure, health systems, and digital economies. The pledge was widely seen as a counterbalance to programs like China’s Belt and Road Initiative, which has positioned Beijing as a major player in Africa.

That paved the way for Canada’s announcement in November of $750 million for a Crown corporation to leverage the private sector to finance infrastructure projects in Asia over three years, starting next March.

The funding is part of the government’s Indo-Pacific strategy and will be administered by FinDev Canada, which previously only had a mandate to finance private sector projects in sub-Saharan Africa, Latin America, and the Caribbean.

“I think there was a collective understanding, something Canada has long known, that we are all connected, north and south,” Trudeau said.

Roland Paris, a former foreign policy adviser to Trudeau who now runs the University of Ottawa’s graduate school for international affairs, said China’s popularity has barely waned in the Global South in recent years, compared to a steep drop in the West.

“This is a kind of realization that the Chinese development model, however odious, has been popular with its recipients,” he said.

Canada’s shift hearkens back to the roots of foreign development, in which multinational agencies such as the World Bank financed projects like hydroelectric dams, only this time with private sector funding.

Trudeau also noted that developing countries took the spotlight at numerous summits, such as the Organization of American States meeting in October and the Commonwealth meeting in Kigali, Rwanda, this past June.

“The emphasis that we put on the Global South was more robust and more real than we ever had before,” Trudeau said.

In a separate interview, Sajjan told CP that humanitarian funding is already helping pay for things like solar power in rural Jordan.

“If you want to prevent the shocks of climate change, we need to do things differently in the Global South,” he said.

“The prime minister is focused on making sure that we look at the long-term capacity-building, within those nations.”

“It should be about results, and the results that this government have achieved leaves a lot to be desired,” he said.

Genuis added that the government has said it may take a year to meet a House of Commons committee’s request to change anti-terrorism laws that have barred humanitarians from working in Afghanistan. He said government programs have overly favoured multilateral organizations over Canada-based aid groups, which he argues are more effective at raising money and spending it wisely.

In any case, Genuis said a deeper focus on FinDev Canada would be better than having Ottawa keep contributing to the Asian Infrastructure Investment Bank, which is controlled by China.

“Our engagement around infrastructure in the developing world shouldn’t be advancing the Chinese government’s strategic interests; it should be through bilateral partnerships with countries that help to strengthen Canada’s presence and relationship with those countries,” he said.

“We’re in this new world of intense competition between the free world and revisionist powers. That context underlines the critical importance of engagement with the developing world.”

“It’s a huge, huge missed opportunity and a terrible mistake,” she said.

“The climate crisis, inflation, inequality—all of these things are massive challenges that will require an international or a global response. And we as Canadians are increasingly forgetting the role that our government must play.”

McPherson added that it’s crucial Canada support Ukraine, but that shouldn’t come at the expense of helping developing countries push back on poverty and build resiliency to climate chaos.

“That is the worst situation of stealing from Peter to pay for Paul and it will come back to haunt us multiple-fold.”

Belanger said the world will likely be watching how Trudeau proceeds. He is currently co-chairing the United Nations advocates’ group for the Sustainable Development Goals, together with Barbados Prime Minister Mia Mottley.

“We have made investments in human rights that are no less important than an investment in infrastructure,” Belanger said.

He argued girls in developing countries need to have schools they can attend.

This report by The Canadian Press was first published December 22, 2022.