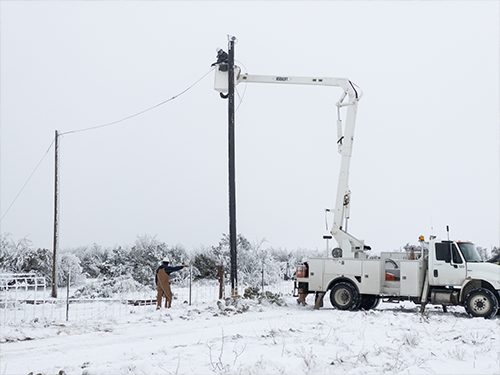 At least 91 people died and the eastern United States narrowly averted a massive blackout after a “bomb cyclone” hit much of the continental United States December 21-26. Facing renewed attention to the vulnerability of the Texas power grid, Governor Greg Abbott demanded a probe of fossil gas supplier Atmos Energy, just months after promising the state was ready to withstand the next round of winter storms. A Ford F-150 Lightning still had two-thirds of its battery capacity available after powering its owner through a two-day power outage in southern Ontario, and California utility PG&E distributed home batteries to help some of its customers get through summer blackouts.

The U.S. Postal Service unveiled plans to replace much of its aging vehicle fleet with 66,000 electric delivery vans by 2026. Global solar capacity grew by 268 gigawatts in 2022, Edmonton-based PCL Construction announced a stand-alone solar division with operations in Canada, the U.S., and Australia, and Quebec gas utility Énergir entered a partnership with Nature Energy to build 10 renewable natural gas plants. Environment Minister Steven Guilbeault decided not to order an impact assessment for a small modular nuclear reactor project in New Brunswick.

Calgary-based Suncor Energy said the Colorado plant that accounts for 21% of its refinery capacity will be shut down until March due to fires and severe storms, and a U.S. regulator announced a review of TC Energy’s special operating permits after the Keystone pipeline suffered a major spill, the 22nd since it opened. Texas fossils were moving fracking rigs into cities and towns after exhausting their wells in less populated areas, and the American Petroleum Institute said its members were having trouble attracting and retaining staff.

Democrats who still held the majority in the House Oversight Committee accused Big Oil of climate disinformation in mid-December, and Republicans anticipating their own narrow House majority vowed to investigate wild and baseless allegations of climate activists colluding with China and Russia. (But first, they’ll have to figure out how to elect a House Speaker.) The GOP also planned further attacks on environment, social and governance (ESG) investment strategies, while giant asset manager Blackrock took hits from all sides for its foray into responsible investing.

The Netherlands said it would stop subsidizing “untruthful” bioenergy companies, and the EU decided to make airlines pay for the pollution they produce. A briefing from a UK campaign group warned that Big Tech’s “toxic business model” is “fuelling climate change by driving emissions, driving consumerism, driving division, and driving out democracy.”