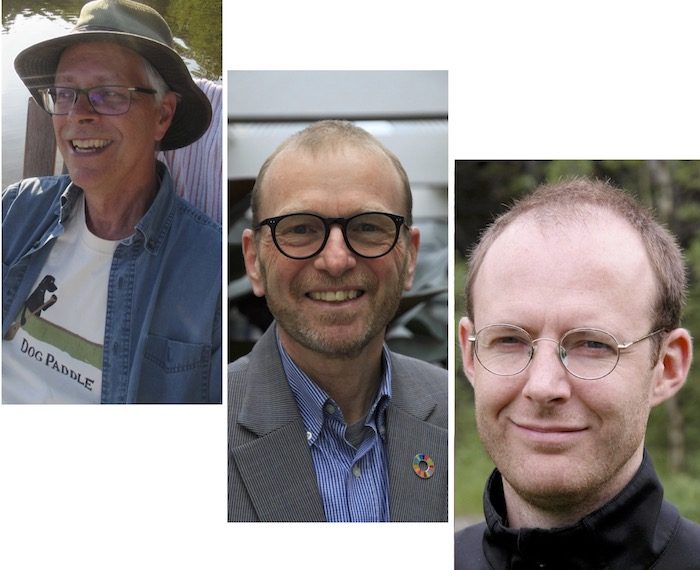 Three influential Canadian climate activist-scholars died this year. They devoted their professional lives to finding solutions to the climate change crisis in the face of industry and government resistance that has dragged on for decades.

This is to remember François Bregha, Meinhard Doelle, and Matthew Bramley.

François Bregha was an expert on northern pipelines and oil sands who worked for government and non-profit groups and as a consultant. Thomas Berger’s Mackenzie Gas Pipeline Inquiry in the late 1970s was critical to how François thought about northern oil and gas development. The environmental impacts of proposed pipelines needed to be understood before shovels hit the ground, and Indigenous peoples had the right to have a say on the impacts of pipelines on their homeland and cultures.

François’ 1981 book Bob Blair’s Pipeline chronicled the nearly successful scam by oilmen to build a pipeline from Alaska to Alberta at public expense. In 1990, François, Julia Langer, Mary Simon and I presented a federal environmental agenda on behalf of 33 major environmental and Indigenous groups to Prime Minister Brian Mulroney. This agenda—Greenprint for Canada—called for carbon pricing and an end to subsidies to oil companies, among other recommendations. Three decades later, a carbon pricing scheme is finally in place, but subsidies to oil companies are bigger than ever.

In recent years, François edited Royal Society of Canada reports on fossil fuels and was a leading expert on strategic assessment—the integration of environmental considerations such as climate change into government policy and programs. François died from ALS in July.

Meinhard Doelle was a pre-eminent scholar and teacher on climate law as well as an environmental activist. He taught law at Dalhousie University, with research interests that intersected environmental and energy law and climate change. He was a prolific writer with monographs on the Canadian Environmental Protection Act and the federal Impact Assessment Act as well as publications such as “Research Handbook on Climate Change Law and Loss & Damage”, and “From Hot Air to Action: Climate Change, Compliance and the Future of International Environmental Law”.

Meinhard was a drafter of the Nova Scotia Environment Act and a policy advisor on the Canadian Environmental Assessment Act. From 2000 to 2006, he was a non-governmental member of the Canadian delegation to the UN climate change negotiations. He co-chaired a strategic environmental assessment on tidal energy in the Bay of Fundy and served on the Lower Churchill Joint Federal-Provincial Review Panel. Meinhard also helped found two environmental groups: Clean Nova Scotia and East Coast Environmental Law. Meinhard died in September from injuries suffered in a collision with a vehicle while bicycling near his cottage.

Matthew Bramley was Canada’s top climate policy expert for civil society in the 1990s and 2000s, serving as the climate change director at the Pembina Institute—Canada’s leading independent think tank on climate and energy issues—and advising other national environmental groups. The media turned to Matthew for his comment on almost any climate story in this period. He earned the trust of the Jean Chrétien-Paul Martin governments as they made their own attempts to address the climate change crisis.

Matthew held a doctorate in theoretical chemistry from the University of Cambridge. Following five years in Bonn, Germany, and three years teaching mathematics to teenagers in Cumbria, England, he returned to Canada in 2020. Most recently, Matthew was a special advisor to Nature Canada in its campaign to convince Canada to better recognize the climate harms caused by logging—one of the highest emitting sectors of the Canadian economy—and to act to reduce these emissions. Matthew died from cancer in September.

Older generations—Post-War, Boomer, and Gen X—have much to answer for in driving climate destabilization and biodiversity loss. François, Matthew, and Meinhard were elders in a band of brothers and sisters who fought for sustainability by pushing back against the dominant nature-destructive attitudes of their generations. I will miss them and I suspect Gaia will, too.

Environmental lawyer Stephen Hazell is founder of Ecovision and a member of the Energy Mix board.