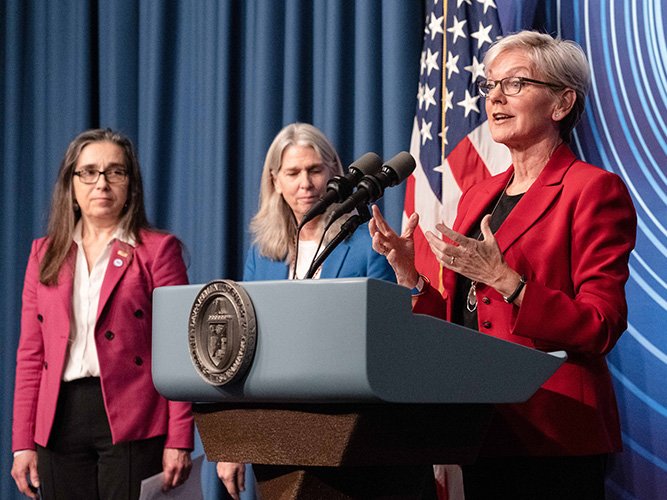 Physicists were thrilled but power grid managers had less to celebrate this week after a U.S. research lab cleared an initial milestone on the very long road to a working nuclear fusion reactor.

Scientists at the Lawrence Livermore National Laboratory in California announced the first fusion reaction in a laboratory that produced more energy than it took to get the reaction started, the New York Times reports.

It will take decades before a major achievement in a physics lab translates into power plants delivering usable, affordable electricity—and possibly decades longer than humanity has available to decarbonize today’s electricity grid and get the climate emergency under control. But the news still generated an outpouring of excitement from scientists, media, and the public.

The experiment “will go down in the history books,” said U.S. Energy Secretary Jennifer Granholm.

“This is such a wonderful example of a possibility realized, a scientific milestone achieved, and a road ahead to the possibilities for clean energy,” White House science advisor Arati Prabhakar told media. “And even deeper understanding of the scientific principles that are applied here.”

“You see one diagnostic and you think maybe that’s not real and then you start to see more and more diagnostics rolling in, pointing to the same thing,” said Annie Kritcher, a Lawrence Livermore physicist involved in reviewing the data from the experiment, which took place just after 1:00 AM December 5. “It’s a great feeling.”

The Times has a detailed account of the experiment itself, including an unexpected success in August that gave scientists some hints about how they could improve the reaction. This time, 192 lasers at the lab’s National Ignition Facility bombarded a small hydrogen pellet with 2.05 megajoules of energy—about the equivalent of a pound of TNT—for less than 100 trillionths of a second. The resulting flood of neutron particles carried about three megajoules, delivering an unprecedented 1.5-fold energy gain.

It was the first time in decades of effort that a fusion reaction ever produced more energy than it consumed.

But while nuclear fusion holds a special place in popular imagination and myth—the limitless source of emissions-free power that could harness the power of the sun and send humanity to the stars—”it will take quite a while before fusion becomes available on a widespread, practical scale, if ever,” the Times reports.

“Probably decades,” said Lawrence Livermore Director Dr. Kimberly Budil. “Not six decades, I don’t think. I think not five decades, which is what we used to say. I think it’s moving into the foreground and probably, with concerted effort and investment, a few decades of research on the underlying technologies could put us in a position to build a power plant.”

But “there are very significant hurdles, not just in the science, but in technology,” Budil added. All of which places fusion far outside the 2030 deadline to cut global greenhouse gas emissions by nearly half, or the 2050 target to get those emissions to zero.

Even with this experiment, the Times says the National Ignition Facility—whose main mission is to help the U.S. maintain its nuclear weapons stockpile—needed 300 megajoules from the electricity grid to produce the initial 2.05-megajoule laser burst. While other lasers would be more efficient, the 1.5 ratio that is causing all the excitement is still just proof of concept, not a commercial-scale result.

“You’ll need gains of 30 to 100 in order to get more energy for an energy power plant,” said Mark Herrmann, Lawrence Livermore’s program director for weapons physics and design. Increasing that output “is really what we’re going to be looking at honestly over the next few years,” after showing that adding a bit more laser energy to the experiment “can make a big difference.”

Times climate reporter Henry Fountain says scientists around the world have been trying to create a fusion reaction they can control (as opposed to a hydrogen bomb explosion that they can’t), “for the better part of a century,” making Tuesday’s announcement “a big deal.” But he stresses the gap between the concept and any application that would apply in the everyday world.

A successful experiment at Lawrence Livermore “is one thing, but a power plant that rapidly vapourizes thousands upon thousands of pellets and safely draws off the released energy for conversion into electricity is quite another. That’s not to say it can’t be done, it will just take time. Lots of time,” Fountain writes.

“The same goes for the other major approach to developing fusion, which uses huge, powerful electromagnets to confine a cloud of hydrogen gas stripped of its electrons, raising temperatures to the point where fusion can occur.” The ITER project in southern France, which was first envisioned in the 1980s, is hoping to deliver on that concept sometime in the 2030s if all goes well.

While the results “are being hyped as potentially heralding a new era of zero-carbon energy from the power of a controlled fusion reaction,” Canary Media writes, “you might not want to bet on fusion providing usable energy during your lifetime.” The news of “a nuclear fusion milestone (with frickin’ laser beams!) is a big deal. Alas, it could be decades before fusion might actually help clean up our energy system.”