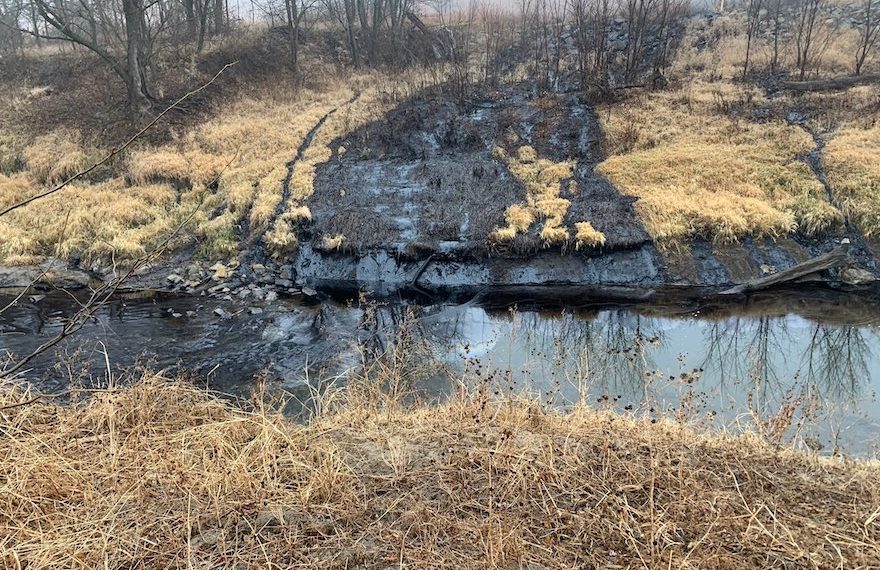 A ruptured pipe dumped enough oil late last week into a northeastern Kansas creek to nearly fill an Olympic-sized swimming pool, becoming the largest onshore crude pipeline spill in nine years and surpassing all the previous ones on the same pipeline system combined, according to U.S. government data.

The Keystone pipeline spill raised questions for environmentalists and safety advocates about whether Calgary-based pipeliner TC Energy should keep a federal government permit that has allowed the pressure inside parts of the system—including the stretch through Kansas—to exceed the typical maximum permitted levels, The Associated Press reports.

The spill in a creek running through rural pastureland in Washington County, Kansas, about 150 miles (240 kilometres) northwest of Kansas City, also was the biggest in Keystone’s history, according to citing U.S. Department of Transportation (DOT) data. TC Energy said the pipeline lost about 14,000 barrels, or 588,000 gallons.

As of Sunday afternoon, the cause of the spill was still unknown, Reuters says.

Environmentalists said the heavier tar sands oil is not only more toxic than lighter crude but can sink in water instead of floating on top. Bill Caram, executive director of the Pipeline Safety Trust, said cleanup can sometimes include scrubbing individual rocks in a creek bed.

“This is going to be months, maybe even years before we get the full handle on this disaster and know the extent of the damage and get it all cleaned up,” said Zack Pistora, a Kansas state house lobbyist for the U.S. Sierra Club.

With Congress facing a potential debate on reauthorizing regulatory programs, the chair of a House subcommittee on pipeline safety took note of the spill Friday.

A U.S. Government Accountability Office (GAO) report last year said there had been 22 previous spills along the Keystone system since it began operating in 2010, most of them on TC Energy property and fewer than 20 barrels. The total from those 22 events was a little less than 12,000 barrels, the report said.

TC Energy and the U.S. Environmental Protection Agency said the Washington County spill has been contained. The EPA said the company built an earthen dam across the creek about four miles downstream from the pipeline rupture to prevent the oil from moving into larger waterways.

Randy Hubbard, the county’s emergency management director, said the oil traveled only about a quarter-mile and there didn’t appear to be any wildlife deaths.

The company said it was doing around-the-clock air-quality checks and other environmental monitoring. It also was using multiple trucks that amount to giant wet vacuums to suck up the oil.

Past Keystone spills have led to outages that lasted about two weeks, and the company said it still is evaluating when it can reopen the system.

The EPA said no drinking water wells were affected and oil removal efforts will continue into this week. No one was evacuated, but the Kansas Department of Health and Environment warned people not to go into the creek or allow animals to wade in.

“At the time of the incident, the pipeline was operating within its design and regulatory approval requirements,” the company said in a statement.

Pipelines often are considered safer than shipping oil by rail or truck, but large spills can create significant environmental damage. The American Petroleum Institute said Friday that companies have robust monitoring to detect leaks, cracks, corrosion, and other problems, not only through control centres but with employees who walk alongside pipelines. In some past spills, however, the most effective monitoring “systems” turned out to be neighbours who spotted the oil, after the industry’s highly-touted automated systems failed.

A more expensive spill happened in July 2010, when an Enbridge Inc. pipeline in Michigan ruptured and spilled more than 20,000 barrels into Talmadge Creek and the Kalamazoo River. Hundreds of homes and businesses were evacuated. Enbridge received a regulatory “wrist slap” for that one.

The Keystone pipeline’s previous largest spill came in 2017, when more than 6,500 barrels spilled near Amherst, South Dakota, according to last year’s GAO report. The second largest, 4,515 barrels, was in 2019 near Edinburg, North Dakota.

The Petroleum Institute said pipelines go through tests before opening using pressures that exceed the company’s planned levels and are designed to account for what they’ll carry and changes in the ground they cover. An arm of the U.S. DOT oversees pipeline safety and allowed TC Energy to have greater pressures on the Keystone system because the company used pipe made from better steel.

But “when we see multiple failures like this of such large size and a relatively short amount of time after that pressure has increased, I think it’s time to question that,” Caram said.

In its report last year to Congress, the GAO said Keystone’s accident history was similar to other oil pipelines, but spills have gotten larger in recent years. Investigations ordered by regulators found that the four worst spills were caused by flaws in design or pipe manufacturing during construction.

TC Energy’s permit included more than 50 special conditions, mostly for its design, construction, and operation, the GAO report said. The company said in response to the 2021 report that it took “decisive action” in recent years to improve safety, including developing new technology for detecting cracks and an independent review of its pipeline integrity program.

The company said Friday it would conduct a full investigation into the causes of the spill.

The spill caused a brief surge in crude oil prices Thursday. Benchmark U.S. oil was up more modestly—about 1%—on Friday morning as fears of a supply disruption were overshadowed by bigger concerns about an economic downturn in the U.S. and other major countries that would reduce demand for oil.

The pipeline runs through Chris and Bill Pannbacker’s family farm. Bill Pannbacker, a farmer and stockman, said the company told him the issues with the pipeline will probably not be resolved until after the Christmas and New Year’s holidays.

The hill where the breach happened was a landmark to locals and used to be a popular destination for hayrides, Pannbacker said.

This Associated Press story was republished by The Canadian Press on December 9, 2022.