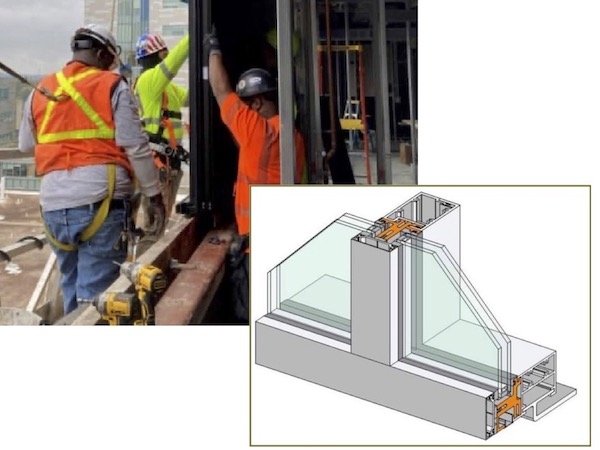 A small shift in design approach could lead to solid gains in the energy performance of low- and mid-rise institutional buildings, according to the team behind a recent energy retrofit that covered a single floor of a university hospital in Hershey, Pennsylvania.

The 25,000-square-foot installation on the seventh floor of the Penn State Health Hershey Medical Center used an improved curtain wall system to increase comfort in patient rooms and eliminate window condensation and drafts in what was previously the hospital’s neonatal intensive care unit (NICU), said Pat Spoden, associate principal in the Madison, Wisconsin office of Flad Architects. Along the way, the new installation cut costs, energy use, and carbon emissions—though there won’t likely be firm data available on energy or carbon savings.

The thermally-enhanced curtain wall system was developed by Todd Frederick, president of FreMarq Innovations in Merrill, WI, one of multiple firms in the U.S. and elsewhere working on new designs for high-performance window assemblies. The FreMarq website states that the patented thermal barrier “stops the transfer of energy from hot to cold”, eliminating the window frame as the weak link in the performance of curtain walls that are standard construction in large buildings.

$20 Billion Out the Window

The last 50 years have seen improvements in window glass performance, with far less attention to the thermal breaks where the windows meet the frame, Frederick said in an interview. “That’s a $20-billion problem for owners, because all that money is going out the window.”

For new construction, in particular, owners of many commercial and institutional buildings “have buckets of money in a project,” he added, with budget lines for heating, ventilating and air conditioning (HVAC), curtain walls, and windows. But by addressing the thermal break, “they can reduce the size of HVAC systems and conserve energy, because the greenest energy is the energy we don’t use.”

The Penn State project was a retrofit, not new construction, focused on one floor in one wing of a hospital that first opened in 1970. The NICU was in an addition built in 1987, and the retrofit involved refitting the neonatal unit as an adult ICU. (Newborn care was moved elsewhere in the building.) An initial assessment pointed to a number of problems with the existing construction, including condensation and drafts, poor exterior insulation, and thermal bridges at the slab edge and the windows. It called for new air handling units as part of the upgrade.

Spoden said the hospital administration set the tone for the project by encouraging the architects to talk to the clinical team in the existing NICU, even though those conversations fell outside the official project scope. “When we asked, they said there was always water on the sills on cold winter days,” he recalled. “The aluminum was sweating, and they were mopping up the water.” That was partly because the addition was built to a 1980s-era state building code that set an energy efficiency standard for exterior wall assemblies, but not for windows.

Either of the options for upgrading the wall assembly would have met today’s code requirements, Spoden said. But if the project team had installed a standard curtain wall, radiant heating would have been needed to reduce condensation, and family members seated in the patient rooms would still have had their heads right next to the coldest part of the frame.

Thermographic modelling showed that FreMarq’s thermally-enhanced windows would make the rooms more comfortable—but the big financial payoff for the hospital was that the ward no longer needed the radiant heating panels. Both retrofit options improved the building envelope, reducing air handling requirements by 6,000 cubic feet per minute (CFM) and saving the hospital US$150,000. But the cost reduction shot up to $350,000 with the radiant heating dropped out of the design.

The new system, which went into service in June, 2022, is also expected to bring down operating costs by $5,000 per year, for a total life cycle saving of $475,000 over 25 years—on a single floor of a two-million-square-foot health care facility.

“The cost for the materials and the installation came out to $148 per square foot, with 25% of the exterior being glass,” Spoden said. “But with full credit for saving the $200,000 by eliminating the radiant panel heating, they brought the cost of the system down to $90 [per square foot]. The curtain wall wouldn’t have done that.”

FreMarq “has put a lot of engineering into it, and it’s not as cheap as a plain-up curtain wall,” he added. But those standard systems “can’t get the same performance without triple glaze,” which would have brought the cost of a finished installation up to $200 per square foot or more.

Consulting engineers on the project said they hadn’t done the detailed calculations that would have translated those cost savings into energy and greenhouse gas reductions.

Once the project analysis was done and work began, Spoden said it only took 40 days to demolish the existing perimeter and install the new one. “It was a great project all around, and I think we’ve given Penn State a roadmap they can implement on all the other existing floors of that campus if they want to,” he said. “The message for any project is that owners, architects, and engineers need to work together to push the envelope a little bit more.”

Penn State Project Director Michael Baron said the hospital won’t be able to confirm cost savings from the project, since the seventh floor isn’t metered separately from the rest of the building. “I would say our best evidence of doing the right thing would be if everyone is comfortable all winter.”

Extending and repeating those improvements across the entire hospital won’t be easy, he explained—there are some occupied patient wings that no one intends to disturb, and an upcoming renovation on the third floor of the addition won’t involve any HVAC replacements.

But Marvin Smith, assistant vice president, facilities at Penn State Health, said the institution would be open to repeating the experience with future major retrofits that involve opening up the exterior walls. “The buildings are different vintages and construction styles, so it may not apply to them all,” he said. “But when it does, it’s certainly a concept that would be on the list of considerations when we do work like this.”

David Barto, the hospital’s vice president, facilities, added that the project wasn’t originally seen as a chance to save energy or cut costs. “We were reacting to a performance issue, and I was surprised how much the energy savings and the reduction on HVAC systems saved us money and helped pay for the envelope improvement,” he said. “That’s a lesson learned for me. We started with performance, but we ended up with the energy savings.”

A video on the FreMarq website says the façades of large buildings account for more than half of their energy consumption. Citing data from the University College London Energy Institute, it states that electricity use per square metre or foot of floor area is 2.5 times higher in towers of 20 or more stories than in low-rise buildings totalling six stories or less, while gas use increases by 40%. That combination drives carbon emissions that are twice as high in high-rise buildings.

Even if a building is powered by renewable energy, Frederick added, owners “will be able to produce less energy, or put it back into the grid and be paid for it” if they use curtain wall assemblies that exceed the minimum requirements in most building codes.

“If you’re going to put up a new building that’s going to last 50 years,” he asked, “why not put the best product available on the exterior skin, save that money for 50 years, and not worry about having to upgrade or update the exterior?”