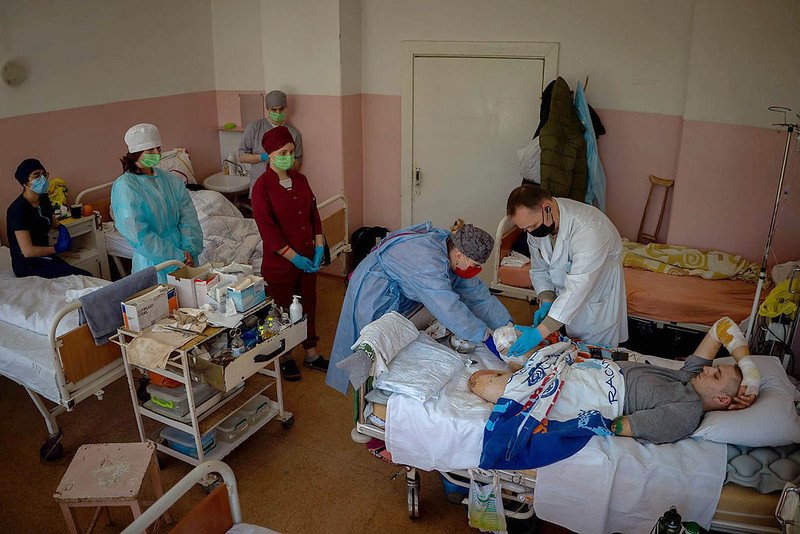 Microgrid and electricity system infrastructure providers are stepping up to support civilians left powerless in the dark and cold, after Russia spent weeks blitzing Ukraine’s grid to demoralize the population and force surrender.

As of Sunday, more than 500 Ukrainian communities were without power as a result of Russian missile strikes, reports Al Jazeera. And the attacks on essential infrastructure continue, Ukrainian deputy interior minister Yevgueny Yenin said in a televised report.

Entire neighbourhoods in Ukraine often rely on a single plant to generate heating, hot water, and electricity, thanks to a Soviet-era centralized system, explains Microgrid Knowledge. So “if the district plant is hit by a Russian missile, thousands of homes can be left in the dark at once.” This leaves civilians vulnerable to attacks that target a few, specific sites to disrupt power for large segments of the population.

With many Ukrainians forced to leave cities for rural areas where they rely on fireplaces and wood stoves for heat, microgrid advocates point to the unfortunate success of Russia’s strategy to highlight the danger of relying on centralized energy systems.

“In the 21st century, you take down the grid and you hurt society,” said Paul Shmotolokha, CEO of Tempe, Arizona-based New Use Energy Solutions, who has been working to provide Ukraine with solar panels, batteries, medical headlamps, and other equipment since the start of the war. His company’s microgrid technology has been critical for keeping the lights on in hospitals and other buildings.

Shmotolokha, tied to Ukraine through family and friends, said he knew from the start that “they’re going to go after the grid.” But supply logistics are not easy, so New Use works closely with several non-government organizations to secure and distribute the equipment.

He told Microgrid Knowledge that the more energy systems his company provides to hospitals, the more requests come in, as medical professionals realize the value of the systems and how easy they are to install and use.

“There is a hospital that we work very closely with that we’ve given four solar generators so far,” Shmotolokha said. “I actually sit on WhatsApp probably twice a week with—can you believe it? —the doctor in charge of the emergency room and the ICU who has now become a solar expert.”

New Use focuses on commercial-grade solar that can withstand harsh conditions, he added. Its portable systems can be lifted by two or three people and are easy to install and operate. “You punch one button, and it is on,” Shmotolokha said. His company continues to seek donations for equipment in Ukraine.

Meanwhile, a Canadian manufacturer of electrical towers is offering to supply equipment for Ukraine’s rebuilding effort. Tower Solutions, with factories in Granby, Quebec, and Brechin, Ontario, says its emergency replacement towers can be installed in a matter of minutes—as opposed to the 90 minutes it takes for other pylons, writes The Canadian Press.

“It is definitely what we need now,” Maxim Timchenko, president of Ukraine’s largest private energy company, DTEK, told a media briefing in November. He said DTEK will be able to provide power to Ukrainians this winter by relying on natural gas stocks and hydroelectric sources. As of October, 14.6 billion cubic metres of gas remained stored in Ukraine, with average winter consumption at 8.2 billion cubic metres. Two billion cubic metres of gas are needed to make up for power lost from the Zaporizhzhia nuclear power plant, operated by DTEK but captured by Russia in March. It continued to operate with the help of “kidnapped” plant workers, but Russia has since diverted the power and it no longer supplies Ukrainian territory.

Russia’s disruption of Ukrainian power and heating infrastructure has been deemed part of a larger attempt to “freeze the country into submission.” Large areas remain without power, and energy officials say it will take six months to restore damaged infrastructure, reports the New York Times.

Some experts are considering whether the grid attacks can be considered war crimes, the BBC writes. According to British intelligence officials, the strikes are the first time Russia has acted on a recently-adopted military doctrine called Strategic Operation for the Destruction of Critically Important Targets (SODCIT).

SODCIT uses “long-range missiles to strike an enemy state’s critical national infrastructure, rather than its military forces, to demoralize the population and, ultimately, force the state’s leaders to capitulate,” the British Defence Ministry recently explained in a tweet.