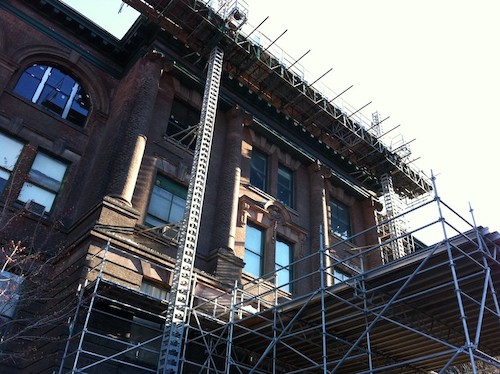 The national organization found bright spots in provincial energy efficiency efforts, with several jurisdictions coming came up with “nation-leading policies” that could and should be adopted across the country, Policy Research Director Brendan Haley said in an interview last week. The scorecard points to the federal government’s 2020 model building codes and energy efficiency measures in the 2030 Emissions Reduction Plan as two of the year’s most notable developments.

One of the first tangible results of the scorecard is a sign-on for low-income energy efficiency, calling for measures in the next federal budget to remove financial barriers for low-income Canadians who want to make their homes more energy-efficient.

“No one should have to choose between eating, heating, and other essentials,” the sign-on states. “Yet millions of Canadians will struggle to afford rising energy costs this winter.”

But “with a few tweaks to existing programming and more funding, the federal government could provide rapid relief to Canadians struggling with home energy costs.”

Although only a few provinces are speeding up their plans to adopt the national model building code, the scorecard says several of them are updating their energy efficiency plans for the next three to five years. British Columbia, Nova Scotia, and Quebec led the rankings again this year, with Nova Scotia moving up from third to second place, largely on the strength of its focused programs for low-income and Indigenous populations, Haley said. Ontario fell one rank, to fifth, and for the first time this year the scorecard had access to enough data to include the Yukon, which placed sixth. The country’s energy efficiency laggards include Alberta placing ninth, Newfoundland and Labrador tenth, and Saskatchewan last.

B.C. led the rankings with just 55 out of a possible 100 points for its energy efficiency programs, enabling policies, and specific measures for buildings, transportation, and industry. The scorecard includes a note advising readers to “think of a score of 100 points as a stretch goal or a summit to strive for,” not a percentage ranking.

And the breakdowns in the report show what that stretch goal might consist of: no province or territory earned more than 21 out of a possible 40 points for energy efficiency programs, only B.C. received more than 6 out of 19.5 for buildings, only Quebec and B.C. scored highly for transportation programs, and eight of the 11 jurisdictions showed up poorly on enabling programs.

The report includes an inventory of “strengths and opportunities” for each of the provinces and the Yukon. It calls on Ottawa to expand its low-income energy efficiency programming, mandate efficient and zero-carbon heating, define net-zero building performance standards, “crowd in” more funding by integrating with provincial efficiency programs, and attach clear expectations for regulatory and policy changes when it sends climate action funding to the provinces.

Haley said energy efficiency is advancing across the country because it doesn’t produce the same political polarization that has built up around explicit climate programs.

“In all the top provinces and even some of the bottom ones, we’re seeing commitments to nation-leading policies, and we’re seeing energy efficiency being a core component of climate plans,” he told The Energy Mix. B.C., for example, plans to mandate a minimum 100% efficiency standard for space and hot water heating, a move “that will make heat pumps the norm” in the province. B.C. is also getting set to require energy labels when buildings are sold and set emission limits that natural gas utilities can meet through energy efficiency.

In Quebec, utilities are working together to introduce electric heat pumps for most heating and cooling, but keep gas in place for the coldest days of the year. The plan has set off a “big debate”, Haley said, raising tough questions about whether gas back-up should ever be needed. But “just the fact that Quebec is actively having that debate shows that they’re well ahead of other provinces in thinking through heating decarbonization.”

There are still obstacles to overcome. “In all the provinces, even the leading ones, the big challenge is to align energy efficiency with net-zero emission and climate change goals,” he said. But “the other thing we’re seeing this year is that provincial policy-makers are recognizing that they really need energy efficiency, and provinces that have scaled back efficiency quite a bit are actually scrambling to ramp it back up.”

“So I do think there’s a recognition that this is really needed.,” Haley said. “But to grapple with climate change along the very short timelines we have, the quantum is not quite there.” That’s why the scorecard calls on Ottawa to “actually define what net-zero emission performance is,” then push provinces, territories, and municipalities to implement it.

Haley pointed to the federal government’s upcoming green building strategy as an opportunity to define net-zero emission intensities for different types of existing buildings, “then encourage regulations and incentives to meet those criteria.” That would mean “moving from just being happy with saving a little bit of energy toward aligning every single building with net-zero-compatible performance.”