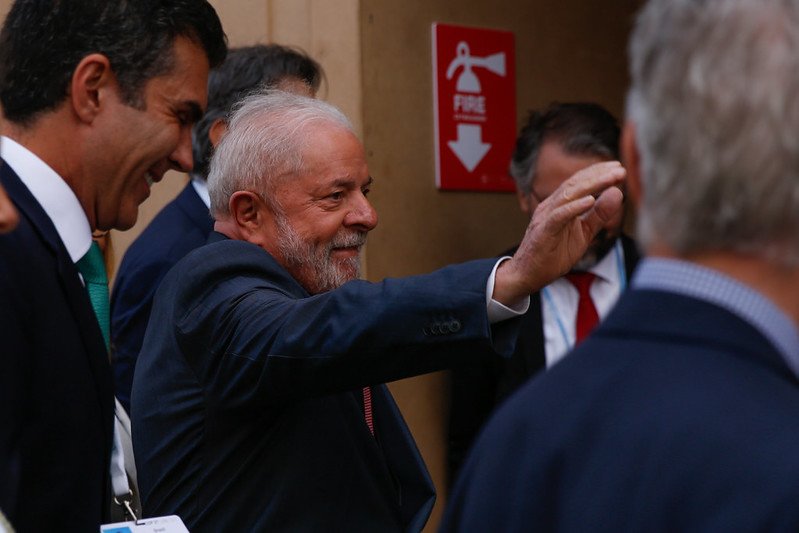 Six weeks before taking power, Brazilian President-elect Luiz Inacio Lula da Silva on Wednesday told cheering crowds at the UN climate conference, COP 27, that he would crack down on illegal deforestation in the Amazon, revive relationships with countries that finance forest protection efforts, and push to host an upcoming world climate summit in the rainforest.

In two appearances, da Silva laid out a vision for management of the world’s largest rainforest, critical to fighting climate change, that was in stark contrast to that of President Jair Bolsonaro, whose administration witnessed some of the most rapid cutting of forests in decades, The Associated Press reports.

“There will be no climate security if the Amazon isn’t protected,” said da Silva, adding that all crimes in the forest, from illegal logging to mining, would be cracked down on “without respite.”

Brazilian presidents have a wide range of powers when it comes to monitoring and regulating the Amazon. The Ministry of Environment oversees the Brazilian Institute of Environment and Renewable Natural Resources, known as Ibama, which patrols the forests. Federal police work across Brazil, including in states with large forest areas, and the armed forces can also be deployed.

Bolsonaro, who pushed development both in his pro-business rhetoric and policies, made several moves that weakened protections. For example, he appointed forest managers from the agribusiness sector, which opposes the creation of protected areas such as Indigenous territories and pushes for the legalization of land robbing.

Many Brazil experts have argued those changes opened the door to widespread criminality: the deforested area in Brazil’s Amazon reached a 15-year high from August 2020 to July 2021, according to official figures. Satellite monitoring shows the trend this year is on track to surpass last year.

The Amazon rainforest, which covers parts of several nations in South America, combats climate change by absorbing large amounts of carbon dioxide. It’s also home to some of the planet’s most unique animals and plants, along with tribes that have lived in the forest for thousands of years.

The appearance at COP 27 of da Silva, who made an extraordinary political comeback after being convicted of corruption and jailed a few years ago, lent both symbolic and practical weight to discussions to reduce greenhouse gas emissions and help developing nations confront the impacts of climate change. That’s because da Silva oversaw large reductions in deforestation as president between 2003 and 2010.

“Lula! Lula! Lula!” chanted the crowd before his first appearance in the morning, using the name Brazilians universally use for the former president.

In that meeting, da Silva met with several Brazilian governors, including from important rainforest states like Amazonia and Pará. He also argued that the UN climate summit in 2025 should be based in the Amazon, so “people who defend the Amazon and defend the climate get to know the region close up.” He said he would pitch the idea to UN leadership this week.

“Brazil can’t remain isolated like it was these last four years,” he declared. “(Officials from Brazil) didn’t travel to any other countries, and no other countries traveled to Brazil.”

Da Silva also had some strong words for world leaders. He mentioned a pledge by rich countries, made during the climate conference in 2009, to contribute US$100 billion a year to help developing nations adapt to the impacts of climate change. That effort has never been fully funded.

“I don’t know how many representatives of rich countries are here,” said da Silva, pausing to smile and look out at the crowd. “I want to say that my return here is also to collect on what was promised.”

Without giving details, da Silva said his administration would work with the Congo and Indonesia, along with Brazil home to the largest tropical forests in the world. Given the moniker “OPEC of the Forests,” in reference to the Organization of the Petroleum Exporting Countries and the way they regulate oil production, Brazilian news reports have said the general idea would be for the three countries to coordinate their negotiating positions and practices on forest management and biodiversity protection. The proposal was initially floated during last year’s climate summit in Glasgow, Scotland, according to the reports.

Despite da Silva’s lofty promises, the task for the incoming administration is huge. While many people, particularly environmentalists and officials at a climate conference like this one, celebrate promises to protect the Amazon, Brazilian leaders have traditionally faced huge development pressures. Those pressures come from sectors like agriculture and mining, along with many people who live in the Amazon and feel that it’s for them to decide how the vast area is managed.

There is also the reality that da Silva’s environmental record as president was mixed. Deforestation dropped dramatically during the decade after da Silva took power, with Marina Silva, former childhood rubber-tapper who worked closely with murdered environmentalist Chico Mendes, as environmental minister. But in his second term, da Silva began catering to agribusiness interests, and in 2008 Silva resigned. She is also attending COP 27 and is a contender for the top environmental job again.

Sassan Saatchi, a NASA scientist and forest expert attending the climate conference, said successfully stemming deforestation would require several things, from stronger governance to economic initiatives that give opportunities to people living in the Amazon.

“There is no one silver bullet,” said Saatchi. “The question is how to put those things together.”

Da Silva has several meetings planned with ministers from various countries over the next days.

On Tuesday night, da Silva met with U.S. climate envoy John Kerry. On Wednesday, Kerry said he was pleased that da Silva “talked about for once and for all getting it right, pulling people together in order to preserve the Amazon.”

Simone Karipuna, an activist from the Amazon, traveled with several other Indigenous women to Egypt to participate in the summit. Between chants with several other women ahead of one of da Silva’s appearances, Karipuna said she believed challenges could be overcome because Indigenous communities living in the forest could work with da Silva.

“We had no dialogue at all with the current administration,” she said.