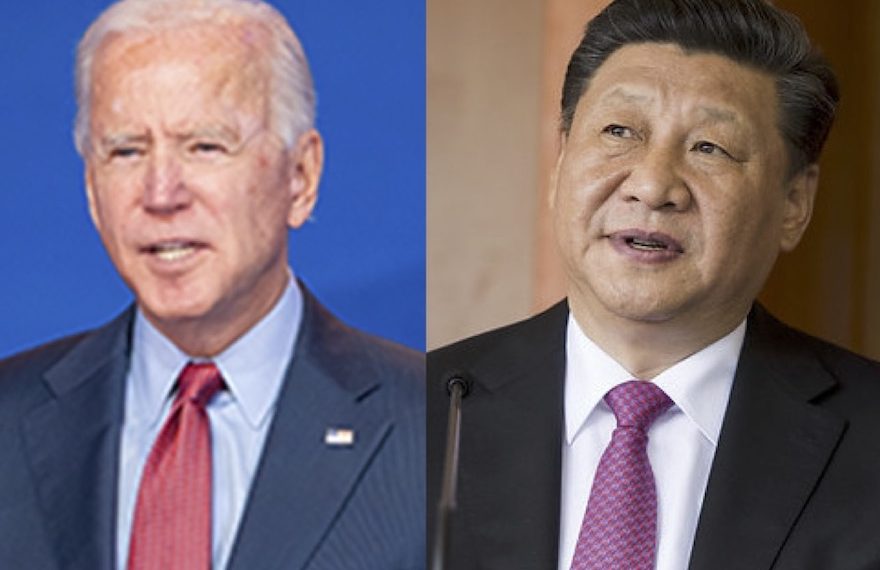 One of the most important moments in this year’s COP 27 climate conference in Sharm el-Sheikh, Egypt, may have happened 9,550 kilometres away in Indonesia, when U.S. President Joe Biden and Chinese President Xi Jinping agreed to restart formal climate cooperation during a side meeting at this year’s G20 summit in Bali.

China had suspended all bilateral relations with the United States, including climate cooperation, after House of Representatives Speaker Nancy Pelosi (D-CA) visited Taiwan in August. The world’s two biggest carbon polluters have had frosty dealings since.

But this week, “while the warmth of Bali did not thaw relations enough for a joint statement, both presidents agreed climate action was a priority,” a development that will “unshackle COP 27 climate teams to formalize talks,” Climate Home News reports.

“The world expects, I believe, the U.S. and China to play a key role in global challenges, from climate change to food insecurity, and for us to be able to work together,” Biden said as the bilateral meeting got under way.

“China-U.S. relations currently face a situation that is not in the interests of the two countries, their peoples, or the expectations of the international community,” Xi said a few minutes later. “As the leaders of China and the United States, we must take the helm and steer the bilateral relationship in the right direction.”

The White House readout from the meeting said Biden “underscored that the United States and China must work together to address transnational challenges,” placing climate change first on a list of policy priorities that also included international debt relief, health security, and global food security. “The two leaders agreed to empower key senior officials to maintain communication and deepen constructive efforts on these and other issues,” the communiqué said, “because that is what the international community expects.”

China’s summary said the two countries “agree to work together to promote the success” of COP 27, citing climate change as one of their “common interests” that is “inseparable from the coordination and cooperation between China and the United States”.

The instruction to senior officials may be what climate envoys Xie Zhenhua of China and John Kerry of the U.S. were waiting for. On Saturday, Climate Home writes, Kerry said the two veteran negotiators “were talking informally, without agendas, notes, or decisions. They would need a signal from Bali, where their presidents are attending a G20 leaders’ summit, to put the conversation on a formal footing.”

But Climate Home picked up mixed reactions to the initial thawing of relations.

Greenpeace East Asia analyst Li Shuo tweeted that the leaders’ meeting “indicates an offramp from bilateral climate suspension and an attempt to prevent geopolitics from polluting climate engagement. This will help calm down tension at COP 27. Both sides can talk to each other, now they also need to lead.”

Byford Tsang, an analyst with climate consultancy E3G, agreed that “both sides seem to have accepted that they should get senior officials to communicate through existing ‘working groups’, and one of them is the one on climate set up during COP 26.” But “we should be reminded that the working group has not generated any concrete outcomes ahead of its suspension. The success of the engagement should be judged on whether the revived mechanism can get both China and the U.S. to accelerate progress on reducing emissions.”

Chatham House analyst Bernice Lee was also left looking for more. “They are the two largest polluters, we are four days out from the end of COP 27,” she told Climate Home. “It’s good that they are inching towards business as usual, but coming together only when the two sides feel like toning down harsh words and rhetoric is not enough.”

“The pledges of renewed cooperation mark a breakthrough in global efforts to avert climate catastrophe,” Politico writes. “But the promise may be muted” if it doesn’t move G20 leaders to commit to a 1.5°C limit on average global warming.

“At the heart of the discussions is whether the G20 will recognise limiting temperature rise to 1.5°C,” Climate Home agrees. “Ministerial talks collapsed in September when China and India pushed back against the 1.5°C goal.”

While Biden looked out for his country’s immediate geopolitical interests during his meeting with Xi, the United States’ hard-line negotiating at the COP might create a diplomatic opening for China, writes the Globe and Mail’s European bureau chief, Eric Reguly.

Negotiations on loss and damage (L&D) have been going badly in Sharm el-Sheikh. Countries on the front lines of the climate emergency are demanding an immediate decision to set up a new financing mechanism for climate impacts too severe for communities to adapt to, while the rich countries on the hook to fund that activity try to postpone the decision to 2024. So far, “a few small countries—Ireland, Denmark, Belgium, among them—have endorsed the L&D concept, to the point they each have committed a few million bucks to the nascent fund that will need hundreds of billions of dollars, perhaps more, to repair the damage inflicted by climate catastrophes,” Reguly writes.

The pace of that funding creates an opening for China, a developing country in its own right with low historical emissions that has no official obligation to supply loss and damage funding, but is still speaking strongly in favour of getting a fund set up.

Reguly says that position might translate into “another launch pad for geopolitical advantage,” not unlike the Belt and Road Initiative, a now 10-year-old infrastructure initiative that has seen China fund projects in 150 countries.

Xie “seemed to be hinting that China would repair climate-related damages in developing countries as a goodwill gesture,” Reguly writes. “But we all know that goodwill gestures can pay dividends. They can buy economic and political influence: In exchange for installing flood control systems or building dams, a waterlogged country could feel obliged to reward China down the road.”

Particularly with climate debt pushing developing countries to the brink, according to a recent Bloomberg analysis, “desperate, climate-whacked countries would no doubt welcome any Chinese repair jobs, even if it were to come with strings attached,” Reguly adds. “China wants to extend is global influence as it strives to become the world’s dominant superpower, and L&D could be a useful tool in this endeavour.”

The U.S., of course, could match some of that impact and influence by stepping up to its own historical responsibility for the greenhouse gas emissions driving the climate emergency. “But so far, the U.S. has signalled it does not want to start writing cheques to that end. China might not be unhappy about that.”