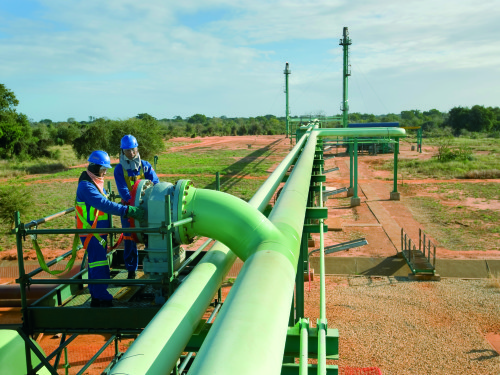 A new report busts the “fallacy” that boosting gas production in Africa will benefit the continent’s population. Instead, the so-called “dash for gas” will devastate the natural environment, leave local communities powerless, and wreak havoc on the climate, report authors say.

“The ‘dash for gas’ is nothing more than a short-sighted strategy to profit from the energy crisis.”

Despite a worsening climate crisis and a growing body of analysis calling for no new expansion of fossil fuels, African leaders are responding to high energy prices—and renewed interest from European countries seeking an alternative to Russian fuel—to call for greater investment in African gas infrastructure, the report authors say.

And these fossil fuel proponents are “misappropriating the language of climate justice to legitimize the dash for gas.” For instance, Senegalese President Macky Sall has said it would be “fair and equitable” for Africa to exploit its resources to boost its economy and “achieve universal access to electricity,” arguing that ending international finance for developing gas production would be a “major obstacle” to Africa’s development. Other influential government officials have touted gas as an important “bridge fuel” for the transition to renewable energy sources.

But the speeches and narratives from officials and business elites are “a far cry from the realities” of front-line communities, activists, climate campaigners, and several politicians across Africa who share concerns about extracting fossil fuels. Contrary to all claims, gas production would not benefit Africa in the long term, say the report authors.

“The idea that fossil gas will bring prosperity and opportunities to Africans is a tired and overused fallacy, promulgated by those that stand to benefit the most: multinational fossil fuel firms and the elite politicians who aid and abet them,” lead author Freddie Daley, a research associate at the University of Sussex, said in a release.

“Locked-in fossil fuel infrastructure will do very little to improve energy access and end energy poverty, create good jobs or further development,” according to the report. Nigeria is proof, with decades of fossil fuel production securing electricity access for only 55% of the population in 2019.

Funding fossil fuels will only saddle African countries with stranded assets that drain their economies for years to come, the report states. And the investment dollars could displace clean energy investments that are more likely to bring immediate, distributed energy access to Africans. Fossil fuel projects could also erode democratic representation and accountability, being highly centralized—with power concentrated within a small group of individuals.

Increasing fossil fuel production will “destroy lives and livelihoods in Africa” at every stage of the fossil fuel supply chain. “Both onshore and offshore gas exploration in Africa has been shown to force communities from their land, disrupt key fisheries and crops, and threaten biodiversity hotspots that many depend on for livelihoods and sustenance,” the release states. “If the dash for gas gathers pace, these direct impacts will intensify.”

Making matters worse, the credentials of natural gas as a bridge fuel are “exaggerated and distorted,” the report adds. Gas may have lower direct emissions than other fossil-based energy sources like coal, but research by the International Energy Agency is clear that meeting the targets of the 2015 Paris Agreement means stopping all new fossil projects—including gas. Other research challenges gas’s viability as a transitional fuel because of the associated “warming impact of methane leakage, additional shipping and transportation emissions, as well as infrastructure lock-in; all of which contradict gas’s standing as a lower-emission energy source.”

Some African leaders may push for short-term gains from fossil investments, but there is currently “a monumental opportunity” for African countries to pursue sustainable socio-economic development by capitalizing on cheap renewables like wind and solar. Africa has substantial untapped potential for these resources, which could secure the continent accessible and sustainable energy. But first, the international community must mobilize investments to develop clean energy and drop the dash for gas, the report authors say.

“The energy crisis is a wake-up call that fossil fuels are the opposite of freedom, yet the world has become shackled to them,” said newly-elected Kenyan President William Ruto. “We need to break free from those chains, to accept there is a better way to power the world’s economy.”

“It is one that is fairer, cheaper and less destructive to ourselves and our communities, to our families’ future, and to the natural environment on which we all depend.”