Symbolic Moves at COP 27 Show Progress on Loss and Damage 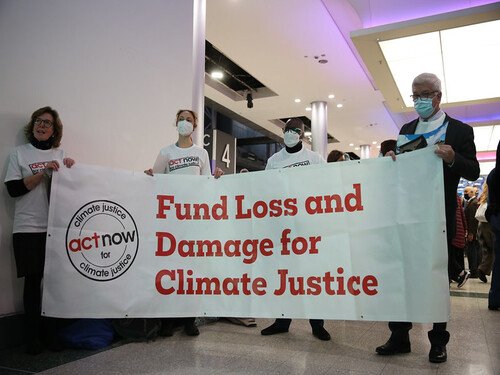 A series of symbolic moves on climate finance suggests positive momentum could be starting to build on a pivotal issue at the COP 27 summit in Egypt.

The UK said it would allow some debt payment deferrals for countries hit by climate disasters, while Austria and New Zealand put forward funding for loss and damage, which is the cost of rebuilding in poorer nations after unavoidable climate impacts, the Guardian reports, in a post redistributed by the Covering Climate Now news collaborative.

The provision of funding by rich, polluting nations to those vulnerable nations that have done little to cause the climate crisis is central to any success at COP 27. Beating global heating requires every nation to act but without progress on finance, developing countries will not trust developed countries and collective action will fail.

The UK said its export credit agency, which loans money to overseas buyers of British goods and services, will become the first agency to include “climate resilient debt clauses” in its lending. These stop debt payments for two years if a nation is hit by a climate disaster, freeing up funds to deal with the emergency.

“Climate shocks are increasing in frequency and severity which is why we are supporting countries hit hardest,” said James Cartlidge, a UK Treasury minister. “In the wake of a disaster, they face painful trade-offs between rebuilding their communities and making debt repayments.”

The move was strongly backed by Avinash Persaud, a special envoy to the Barbados prime minister, Mia Mottley, the most prominent backer of major reforms to the global financial system to deliver climate finance. “Adopting these clauses in debt instruments is the single most impactful way of making the international financial system fitter for the new world of shocks and for international development. I cannot commend this initiative by the UK government enough.”

Mottley’s Bridgetown Agenda, which sets out sweeping proposed reforms to the World Bank, International Monetary Fund (IMF), and other multilateral development banks (MDBs), received the backing of France at COP 27. That is significant as it is the first developed country to support the agenda. A group of 10 developed nations, including all the G7, are also putting pressure on the banks to reform. Only one MDB includes climate clauses.

There are three types of climate finance: for cutting emissions, adapting to inevitable climate impacts, and for loss and damage. The latter is the most controversial and has been blocked for decades by rich nations for fear of being held liable for huge sums of compensation.

Scotland was the first nation to break what campaigners called a “taboo” on providing loss and damage money, followed by Denmark, Belgium, and Germany. Austria joined the group on Tuesday at COP 27, pledging US$50 million (£44 million). New Zealand also announced a $20-million climate fund for land and resources lost by developing countries—in effect loss and damage.

Emily Wilkinson, senior research fellow at the ODI think tank, said: “The growing number of country pledges on loss and damage funding is significant and welcome. We expect more countries to pledge during COP 27. This puts further pressure on negotiators to agree to the development of an appropriate financing mechanism.”

The creation of a loss and damage fund is a key demand of developing nations at this year’s COP. However, the millions being pledged are far short of the sums that will be needed, which could run to $1 trillion a year under some estimates. Mottley raised the idea at COP 27 of a 10% tax on soaring fossil fuel profits to fund loss and damage.

Analysis by campaigners at Global Justice Now published on Wednesday suggested that five big oil companies—Chevron, ExxonMobil, BP, Shell, and Total—should be paying $65 billion a year based on their contribution of 11% of global carbon emissions to date. Recent research showed that the oil and gas industry has delivered an average of $1 trillion a year in pure profit for the last 50 years.