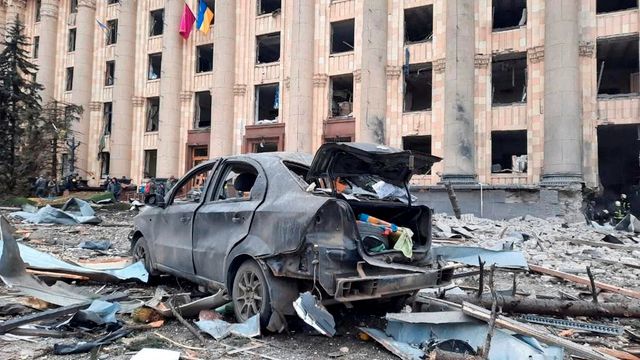 Russia’s war in Ukraine has been driving up global greenhouse gas emissions—to the tune of 100 million tonnes of carbon dioxide equivalent in seven months—but the biggest climate impact is expected from rebuilding after the war ends.

The massive, continuing Russian invasion has brought devastating damage to infrastructure and environment, Svitlana Grinchuk, Ukraine’s deputy minister of environmental protection and natural resources, told a group of COP 27 panelists on Day 259 of the occupation. “Apart from local destruction, this war is also impacting the world climate through the extra emissions of carbon dioxide and other greenhouse gases.”

Military accountability is a glaring blind spot in global emissions reporting regulations. Scientists estimate that militaries account for 5% of global emissions, but there is no process or responsibility to report military emissions under the United Nations Framework Convention on Climate Change.

“How could these emissions be accounted for internationally, and who actually takes responsibility?” asked Axel Michaelowa, research director at Perspectives Climate Research, at Wednesday’s COP 27 side event on military emissions. “We can feel significant, real military emissions, but nobody has dealt with it properly.”

Military emissions “both in peacetime and war are relevant international emission sources,” he added, citing a recent study by his team. “They are material, they have numbers comparable to emissions of the entire country.”

Central to the panel discussion was a recent study that broke down Russia’s war’s emissions into four main sources. In addition to rebuilding civilian infrastructure, those sources include emissions produced by the movement of refugees and internally displaced persons, fires, and the warfare itself. Combined, seven months of full-scale war totalled at least 100 million tonnes of carbon dioxide equivalent (CO2e), or around the same as the GHG emissions of a country like the Netherlands over the same period.

• Many Ukrainians left their homes immediately after Russia’s invasion in February and travelled to other regions of Ukraine, nearby European countries, or farther. By calculating the total number of people travelling, their departure points and destinations, and the emissions for each kilometre travelled in various transportation modes, the study found that the movement of refugees produced around 1.4 million tonnes of CO2e.

• Shelling, bombing, and mine-laying operations in Ukraine have also set fires in the country’s forests. The study found that total number of fires during the war increased 112-fold, and the total land area affected by fire increased 38 times, compared to the same period in 2021, accounting for 23 million tonnes of CO2e.

• Increased fuel consumption for operations and troop movements also contributed emissions, and the study also assessed explosives and munitions emissions that are usually excluded from assessments of military field operations. Data for military fuel use is difficult to access and quantify in peacetime—and almost impossible in wartime—but the study estimated emissions from warfare to the extent possible, at a total 8.8 million tonnes of CO2e.

• The war’s most significant emissions are expected to be the more than 48 million tonnes of CO2e generated by the damage to civilian infrastructure and the rebuilding effort. “The disposal of rubble and rebuilding from infrastructure destruction is a long, carbon-intensive process,” said Deborah Burton, co-founder of Tipping Point North South.

Describing the expected emissions intensity of the rebuilding effort, Burton recalled a UN program manager saying emissions from disposing of debris after the Iraq war was comparable to “travelling from the Earth to the moon multiple times.”

Burton stressed that military emissions are “inextricably linked” to military spending, and the war’s effect on global GHGs will manifest beyond direct impacts in Ukraine, as countries like the United States, Russia, and members of the European Union increase their military budgets. Emphasis on military spending undermines other efforts to address climate change, she added, with the world’s richest countries spending far more on war and war preparations than on climate finance. The long-neglected cost of loss and damage could be easily met if military spending were redirected to finance climate adaptation in vulnerable countries, she said.

Burton’s remarks reflected a recent statement by Ukraine President Volodymyr Zelenskyy, who observed that “we are all thinking about how to generate hundreds of billions of dollars to help developing countries protect themselves from climate change. Under these conditions, how can anyone cause additional, insane damage to nature with their invasive military ambitions? Such ambitions deserve only punishment.”

Climate Will Cost Canada $145B by 2100, But Fossil Emissions Still Rising