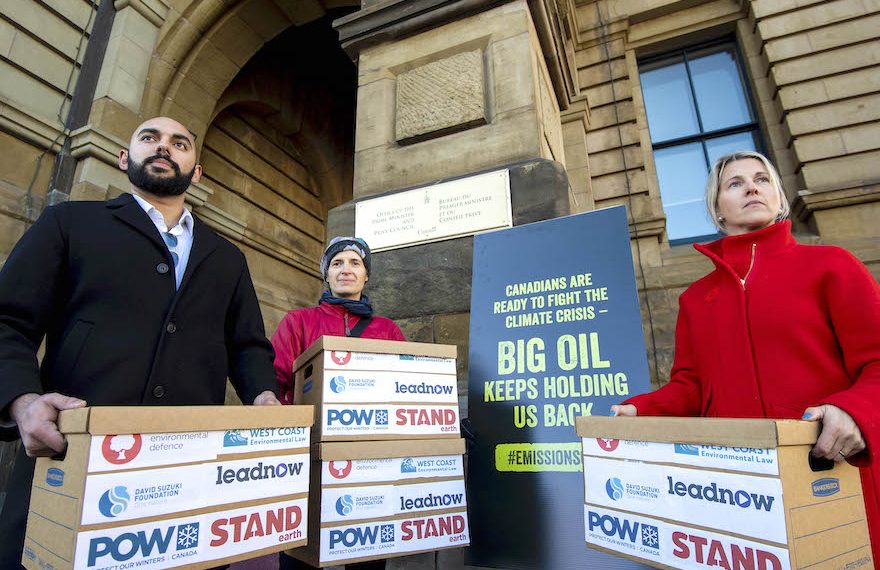 With the COP 27 climate summit in full swing in Sharm el-Sheikh, Egypt, Canadian climate hawks were in Ottawa yesterday delivering more than 80,000 petition signatures—82,622, to be exact—calling on the Trudeau government to make good on its promise to impose an emissions cap on the country’s oil and gas industry.

“The message from Canadians is clear: the oil and gas industry needs to be held accountable for their pollution,” Aly Hyder Ali, manager of Environmental Defence Canada’s oil and gas program, said in a release. “Without an ambitious emissions cap on the sector, Canada will not be able to meet its climate commitments, and the public will have to pick up the slack.”

With countries gathered at the COP, Hyder added, “we are looking for the federal government to announce the pathway it will implement to limit and reduce oil and gas pollution.”

“Despite oil and gas industry promises, we are not seeing the sector do its share to confront the climate emergency,” said Anna Johnston, staff lawyer at West Coast Environmental Law. But the “majority of Canadians agree: we need a legal limit on how much Canada’s most-polluting sector can emit. A strong, ambitious oil and gas emissions cap is our best shot at ensuring the oil and gas sector does its part and contributes to Canada’s fair share of global emissions reductions.”

“Oil and gas extraction is Canada’s largest and fastest growing source of climate pollution,” said Sven Biggs, director of Stand.earth’s Canadian oil and gas program. “While many other Canadian businesses have taken action to reduce their climate impacts, all of that progress has been wiped out by expanding oil and gas extraction.”

“Every year, 75% of Canadians engage in outdoor activities, but from wildfire smoke to thin ice and avalanches, climate change is making this increasingly challenging and higher risk,” said Protect Our Winters Executive Director Ali Wines. “To protect our world-class natural spaces, and the health of our citizens, Canada must deliver on its emissions reductions commitments.”

Prime Minister Justin Trudeau included an emissions cap in his December, 2021, mandate letter to Environment and Climate Minister Steven Guilbeault, and Ottawa released an options paper for the cap in July. By then, the fossil industry was already pushing back on the government’s 2025 emissions reduction target, with Cenovus Energy CEO Alex Pourbaix calling for a slower, “achievable” path to decarbonization.

By mid-August this year, the country’s four biggest oilsands producers—Cenovus, Suncor Energy, Canadian Natural Resources Ltd., and Exxon-owned Imperial Oil—were still rejecting the cap, even as they reported C$12.3 billion in profits over three months. The companies’ record profits have only increased since. But the Pathways Alliance, which accounts for 95% of Canada’s oilsands production, made it clear in mid-October that it wouldn’t make the investments it was promising to curb investments without new federal subsidies—a demand that Finance Minister Chrystia Freeland largely resisted in her economic statement last week.