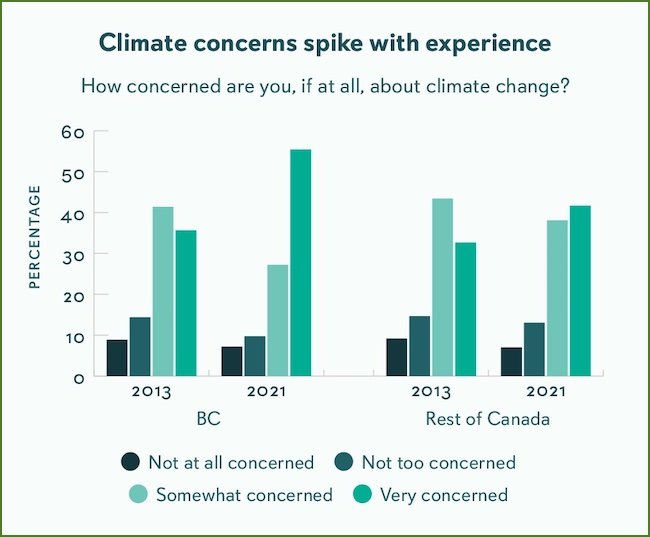 With extreme weather events increasing around the globe, concern about climate change is creeping up, but slowly. Canadians still maintain an emotional or psychological distance in their perceptions of the personal risk of harm posed by climate change, with some exceptions.

Last fall, a national survey looking at opinions and beliefs about climate change found that more than  40% of respondents were “very concerned” about climate change, up about 10% from 2020. But a significant 20% were still ”not too concerned” or “not at all concerned”, according to the survey by EcoAnalytics researcher Dr. Erick Lachapelle, a political scientist at l’Université de Montréal.

Some of the beliefs underlying this indifference included the perceptions that:

• The government would be unable to curb emissions if it tried;

• The cost of living should be addressed before climate change; and

• Canada is already doing its fair share to address climate change; and/or

• It’s too late to make a difference.

The survey also revealed that many Canadians still see climate change as a distant problem unlikely to cause them personal harm, even though 61% recognize that weather patterns are already undergoing significant changes where they live.

But Lachapelle’s study still found a significant increase in concern about personal risk among respondents in British Columbia. And, yes, it was conducted shortly after severe fall flooding, when memories of a devastating heat dome in June-July and record-breaking wildfires and smoky skies across much of the province throughout the summer were still fresh in people’s minds.

The survey revealed that, among B.C. respondents, the belief that climate change would harm them personally “a great deal” had more than doubled to 23% in 2021, up from 10% in 2015. This correlates to a significant increase in concern about climate change in general among people in B.C., as shown in the graph above. In 2021, 55% of British Columbians said they were “very concerned” about climate change, up from 35% in 2013. In the rest of Canada, the jump was also significant, but less so, with 40% of respondents “very concerned”, up from 30% in 2013.

How to act on this data? There may not be time to wait for all Canadians to experience the damage and loss wrought by climate change first hand. So communicators might wish to use this information to strengthen messages that foster empathy for those directly touched by extreme weather—close to home, where possible—as well as the need for personal preparedness and the actual level of risk.

EcoA will be supporting Lachapelle again as he returns to the field this month with another of his annual climate surveys, updating data that tracks Canadian opinions and beliefs about climate change over more than a decade now. (Lachapelle has conducted the survey annually since 2011, with support from EcoA since 2016.) This year, he will be oversampling in the Atlantic provinces to assess the impact the experience of Hurricane Fiona may have had on residents’ levels of concern about climate change and beliefs about personal risk, allowing for comparisons with changes seen among British Columbians last year.

Keen to learn more about such useful data and communications guidance? If so, please check out our website.

COP Process is Busted but Not Irrelevant, Observers Say