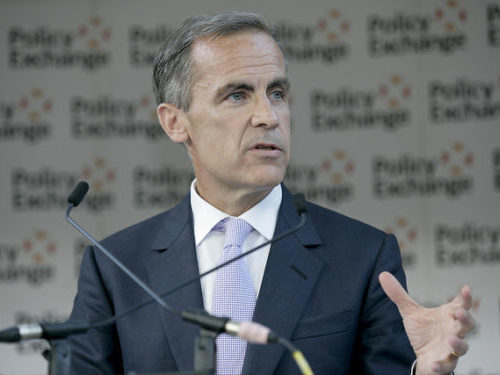 UN climate finance envoy Mark Carney is pointing to a “wall of opportunity” for clean energy investment, even as a senior banking executive declares that Carney’s Glasgow Financial Alliance for Net-Zero (GFANZ) is stalling out on the voluntary commitments it’s trying to extract from the world’s biggest banks.

“The smart money” is following “an absolute wall of opportunity in just rolling out clean energy at scale,” Carney told Bloomberg TV yesterday, during an interview at this year’s United Nations climate summit, COP 27, in Sharm el-Sheikh, Egypt.

Carney spoke just hours before Stand.Earth reported that the Royal Bank of Canada, the country’s biggest chartered bank, had directed C$9.2 billion in financing and underwriting to “top fossil fuel expansionists” like Enbridge, ExxonMobil, Chevron, TC Energy, and Saudi Aramco since it joined GFANZ in 2021, including $3.4 billion in shale and fracking, $2.7 billion in oilsands, $1.4 billion in coal, and $1.3 billion in liquefied natural gas so far this year. The bank holds more than $16 billion in investments in extreme fossil fuel investments.

Carney’s remarks to Bloomberg focused more on the general potential he sees for climate finance, not the individual banks that were either at risk of being kicked out of GFANZ, like RBC, or threatening to quit over tougher performance standards.

“A lot of the answer to energy security problems that have been exposed by Russia’s illegal war has to do with sustainability,” said Carney, who co-chairs GFANZ and was previously governor of the Bank of Canada, then the Bank of England. “That’s why you’ve seen a five-fold increase in the ambition in the European Union for this decade. That’s why you’ve seen the big rollout with the Inflation Reduction Act (IRA) in the United States…these are solutions to not just climate issues, but geopolitical issues.”

As vice-chair of Toronto-based Brookfield Asset Management, he said he’s seen the company’s clean portfolio grow “from 20 gigawatts in our pipeline of building renewables to over 100 gigawatts in just 12 months,” suggesting a period when investors will be looking for companies moving faster to reduce emissions.

But Carney was speaking just a week after GFANZ was accused of “quiet-quitting” the Race to Zero Campaign, a UN effort to rally businesses, cities, regions, and investors around a 2050 net-zero target, by keeping emission reduction commitments voluntary for the banks and asset owners whose climate behaviour it aims to influence. “GFANZ, of which Carney is the chief architect, has managed to attract around 100 new signatories over the past year, and now numbers about 550 members representing roughly US$150 trillion in assets under management,” Bloomberg writes. “But climate activists have argued that GFANZ’s expansion has come at the cost of credible net-zero targets,” with proponents of the looser standard contending that a mandatory set of coordinated net-zero goals could leave banks open to anti-trust accusations.

But those complications may mean GFANZ’ influence has run its course, writes Huw van Steenis, senior advisor to the CEO at UBS Group, a Swiss multinational investment bank, in an opinion piece for Reuters. While it “has made a positive contribution,” van Steenis says, “the initiative is starting to hit the limits of what financial institutions can achieve through voluntary cooperation,” a limitation that throws the onus back on governments to unlock more than $3.5 trillion per year in low-carbon investments while COP 27 is under way.

GFANZ has indeed “brought climate risk into bank and asset managers’ boardrooms and into their day-to-day risk management processes,” van Steenis adds, prompting 53 banks to adopt science-based emission reduction targets with 2030 deadlines—53 more than had done so at the beginning of last year. Meanwhile, “firms have worked with regulators to enhance their collective understanding of the financial risks from global warming. More than 30 central banks including the U.S. Federal Reserve have started running climate scenarios on their largest lenders,” potentially leading to higher borrowing costs based on climate risk.

“But voluntary disclosures, sharing best practice, and some peer pressure can only go so far,” he says. “Firms that make voluntary commitments are still subject to the legal and regulatory frameworks where they operate”—that’s the concern about anti-competitive behaviour—and there’s also a sense that carbon reductions run counter to bankers’ fiduciary duty to their investors. Those are the factors that have had GFANZ backing away from Race to Zero and BlackRock CEO Larry Fink, who had famously prioritized climate risk and fossil fuel divestment, now declaring that his industry won’t play the role of “environmental police”.

Now van Steenis is urging governments to provide “policy clarity” through measures like the U.S. IRA and encourage financing that “helps turn utilities and heavy industry from grey to green”. He also sees the World Bank and other multilateral lenders working through GFANZ to increase the flow of green finance to developing countries.