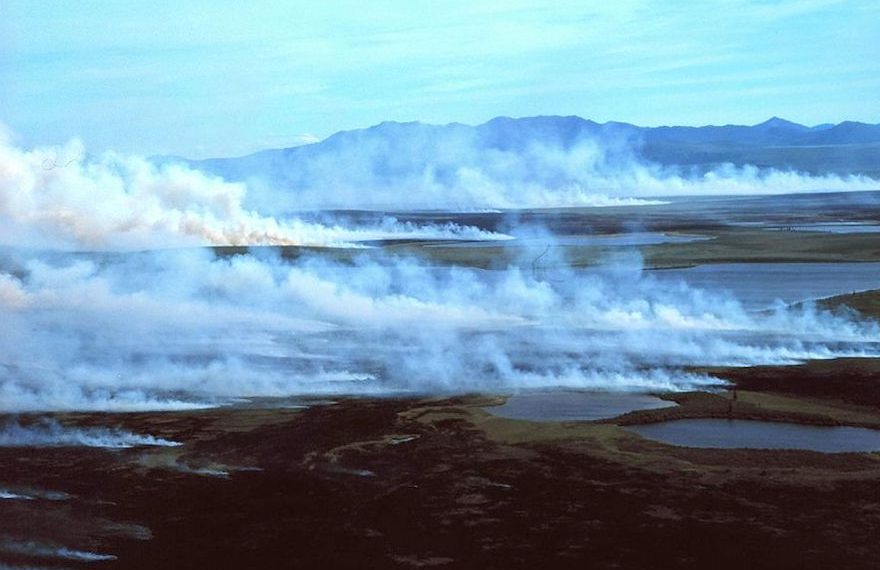 In two of the world’s warmest years, fires in the northernmost regions incinerated an area of forest and peatland to release 150 million tons of carbon into the atmosphere, concludes a peer-reviewed study released last week by the American Association for the Advancement of Science.

And the scientists warn there could be an exponential relationship between even tiny advances in temperature and the area at risk from fire. In 2019 and 2020, fires in the Siberian Arctic scorched 4.7 million hectares, or 4,700 square kilometres of land. This adds up to 44% of all the area burned in the region in the last 40 years.

The Arctic soils are a natural reservoir of vast amounts of stored carbon. But as the global thermometer rises, once-waterlogged and frozen peatland dries and becomes potentially flammable. A few lightning strikes, a blaze in the boreal forest, and what had once been a carbon sink becomes a carbon source, as centuries of stored soil carbon goes up in smoke, methane, and carbon dioxide.

In the course of what used to be a normal year, Arctic permafrost and tundra soils are calculated to absorb 100 million tons of carbon from the atmosphere, the study says. In just two very recent years, wildfire actually liberated half as much again.

Inevitably, a greater burden of atmospheric carbon means a warmer world, which in turn means an ever greater danger of peat and timber fires in the Siberian and Canadian Arctic, to drive global heating to ever more dangerous levels.

Adrià Descals of the Centre for Ecological Research in Barcelona, Spain, and colleagues from France, Holland, and Japan report in the journal Science that they studied 40 years of satellite data to identify fire damage in the Siberian Arctic between 1982 and 2020. They found a huge proportion of the damage concentrated in just two years: 2019 and 2020. They examined all the factors at work to create conditions for fire in an unlikely environment—wind speed, air and surface temperatures, precipitation, changes to the growing season, lightning frequency, and so on—and, they say, “identified a near-exponential relationship between these factors and annual burned area.”

They followed that finding up with a clear warning: by mid-century, large fires are likely to recur with increased warming. There is a temperature threshold, and the Arctic, already the fastest-warming region on the planet, is about to cross it.

In effect, the research has pinpointed a new component in the climate crisis: what engineers call a positive feedback loop, in which more warming means more fire which means more warming—which in turn of course, would mean ever bigger and more devastating Arctic fires.

Studies of this kind, published on the eve of the COP 27 climate conference in Egypt, add even greater urgency and more substance to the latest global surveys. In the last days of October, writing in the journal Bioscience, researchers took the measure of vital planetary signs to warn that humanity is “unequivocally facing a climate emergency.”

The World Meteorological Organization’s annual climate report said it even more clearly. The world is now warming at such a rate, and greenhouse gas concentrations are now so high, that the target set by 195 nations in Paris in 2015, to contain average global warming to a rise by 2100 of no more than 1.5°C, is “barely within reach.”

The fresh identification of yet another component in the surge in planetary temperatures—the hazard of a flaming Arctic—adds to the substance of all such warnings. Without dramatic and drastic action, worse is on the way. Scientists for decades have published the evidence of crisis, but science can only suggest the answers. Researchers increasingly see any solution as ultimately driven by political action on a global scale, and tend to say so with increasing forthrightness.

“This is evidence from the past year from every corner of the world showing that sea levels continue to rise faster, lethal heat waves are getting hotter, and the time we have to change course gets shorter,” said Hannah Cloke of the University of Reading in the UK, commenting on the WMO’s latest report on the state of the global climate.

“The leaders of nations gathering in Egypt may feel like they have a lot on their plates at the moment. But history will judge them, and us, as the most pathetic, shortsighted, and stupid generation that ever lived if we continue to ignore the evidence, and don’t take the last credible off-ramp available to us.”

Ocean Warming Moves Faster and Deeper, May Double by 2100