COP 27: Can World Leaders Be Trusted to Deliver? 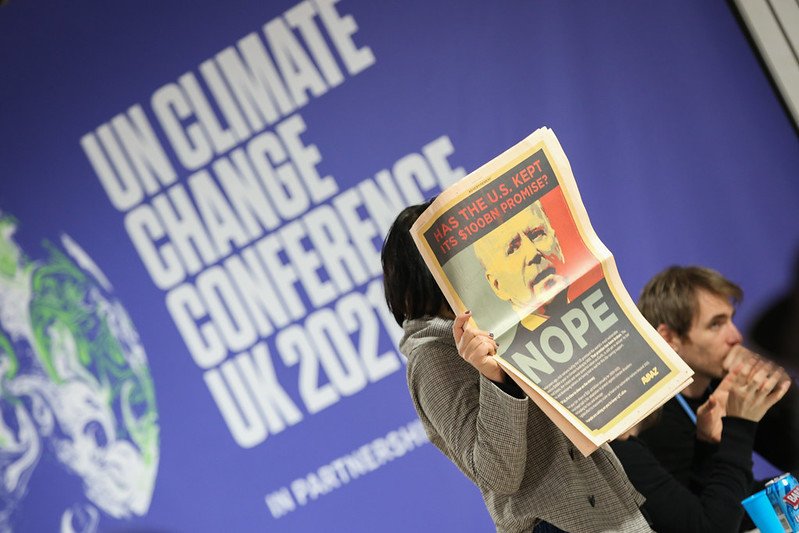 Leaders of major economies who handed polluting fossil fuels US$693 billion in financial support last year—the highest level since 2014—are among those entrusted with tackling global heating and delivering climate justice at the COP 27 climate summit in Sharm El-Sheikh, Egypt.

Campaigners worry that governments are backtracking on their climate pledges, reports Euronews, their priorities scrambled by hurdles like the COVID-19 pandemic and Russia’s stupefying war in Ukraine—which on top of immeasurable human loss and suffering have caused labour, fuel, and food shortages, with cascading effects around the world.

At a time when nothing short of a system-wide transformation of the world’s grids, industries, transport, and agriculture will inch us closer to the 1.5°C “safe” global heating limit, the question arises: Can leaders at COP 27 deliver the immediate and substantial action to avert global climate catastrophe?

The First Priority: Loss and Damage

Climate-linked weather disasters are already here: the United States experienced 15 billion-dollar climate disasters by September this year, says the National Oceanic and Atmospheric Administration, while southwestern U.S. states face their driest conditions in 1,200 years amidst a continuing megadrought. A scorcher summer left more than 2,000 people dead in Spain and Portugal, with the United Kingdom seeing its highest temperature on record, at 40.3°C. Flooding on the eastern coast of Australia stretched 1,600 kilometres in March, a deluge that more recent rainfall is expected to eclipse, the Guardian says.

Yet these concerning numbers pale in comparison to the Majority World, where the most vulnerable and least responsible for climate change reside. Flooding in Pakistan inundated 75,000 square kilometers of the country, left 17,000 people dead, and affected 33 million people overall this year. The country’s ex-finance minister said total losses could be as high as US$40 billon.

The devastation shows how “the world is failing to invest in protecting the lives and livelihoods of those on the front line,” said UN Secretary-General António Guterres in a video posted in the run-up to COP 27. He called the conference a critical “litmus test” for rebuilding trust between developed and developing countries, and for meaningful outcomes around loss and damage, reports Reuters.

Loss and damage finance would help cover the disproportionate destruction already facing countries like Pakistan—nations that are unable to adapt fast enough, unprepared for extreme weather, and have contributed very little to the problem based on their per capita emissions. But for more than 30 years, securing financing from more developed countries has been like pulling teeth during climate negotiations.

“Rich governments did not want to be held financially liable for the impacts of their historically high emissions,” Reuters explains. Glasgow’s COP 26 failed to make progress on loss and damage, except for a £1-million funding announcement from Scotland. A 2009 pledge for an annual US$100 billion in international climate finance was also left unmet.

“The rich world has created the climate crisis, they have agreed they will pay to clean it up, but they have broken their promise and left those that have done the least to cause it to suffer and try and cope with the consequences,” said Khadija Mohamed Al Makhzoumi, Somalia’s minister for environment and climate change.

But now the opposition is softening. U.S. climate envoy John Kerry recently said Washington would not be “obstructing” loss and damage talks at COP 27, meaning for the first time ever, the U.S. appears willing to discuss reparations, reported CNBC.

The leaders of France, the Netherlands, and Senegal recently co-wrote an opinion piece in the Guardian, urging more concrete support for vulnerable nations, especially Africa. The “two priorities for COP” the leaders listed in the article were to keep the 1.5°C target within reach, and to “radically accelerate climate adaptation action in Africa and in all vulnerable developing countries across the globe.”

But their stance only addresses adaptation funding, which, as they wrote, would cover things like “introducing drought-resistant crops, accessible digital services for smallholder farmers, weather-proofing infrastructure, and creating new, green jobs for young people.”

That’s not the same as loss and damage payments, which would cover losses from catastrophes too big and far-reaching to adapt to, like resettling the hundreds of millions of people around the world displaced and left homeless and hungry by rising seas, droughts, and destructive storms.

A COP for Africa

Despite the best stated intentions from the developed world, scientists and campaigners in Africa fear this year’s climate summit will once again leave them sidelined, even if it’s being billed “the Africa COP,” writes Agence France-Presse.

Broken loss and damage commitments play a part in this skepticism, and though the promised adaptation finance will be critical, most African countries have a very long way to go in the clean energy transition.

South Africa is one example. The country made news after floods and landslides across the KwaZulu-Natal and Eastern Cape provinces killed more than 400 people in April. Last year, a group of rich nations pledged US$8.5 billion over three to five years to help South Africa implement a climate transition plan and boost private investment, reports AFP. But the coal-dependent country will need at least $500 billion to reach net-zero by 2050, the World Bank recently said.

Susan Chomba, director of the African NGO Vital Landscapes, said governments should use COP 27 to push for green development investment on the continent. “We do need development for our people and we need to use the resources that are within our reach,” she said.

For some African leaders, those “resources within reach” include fossil fuels. Algeria, Angola, Egypt, and the Democratic Republic of Congo have signed contracts with Italy for fossil exploration, as Europe taps Africa to fill the gap from halted Russian gas imports. Critics have accused Europe of hypocrisy, after wealthy European countries demanded that the Global South leave their fossil fuel reserves in the ground. Plus, nearly 600 million Africans have zero access to power, while in Europe, the average consumer uses more than six times as much electricity as the average African.

“The contentious and complex nature of exploiting Africa’s natural gas reserves may prevent a breakthrough” at COP 27, writes Chatham House Associate Fellow Karim Elgendy. As might Egypt’s summit strategy, which “appears to favour its own position while putting other African countries at a disadvantage.”

Elgendy says that in August, the African Union proposed a common continental position on energy access to be tabled at COP that enlisted support for using renewable and non-renewable energy sources, but Egypt rejected it.

The COP 27 host country’s project-led approach to climate finance may also pose a problem, Elgendy adds. Egypt already has a string of green energy and green hydrogen projects ready to receive funding, but most of its sub-Saharan neighbours lag behind in developing green projects, and may miss out on the benefits from this approach.

If this year’s COP is to be successful, African officials must “develop a common position at this summit that will provide the pressure needed to deliver benefits for the whole continent,” Elgendy concludes.

The African Group of Negotiators has done just that with a six-point plan developed by delegations from across the vulnerable country blocs. Its priorities for COP 27 include delivery of climate finance to Africa and other developing countries, strengthening adaptation support, the creation of a loss and damage fund, confirming concrete Nationally Determined Contributions to curb emissions, and supporting a just transition for an Africa fuelled by wind and solar, not natural gas. The group also suggests maximizing use of the UN’s Global Stocktake—a review mechanism under the Paris agreement that shows what countries have done so far to curb emissions—to make sure climate negotiations are fair.

Delegates and experts from Africa and across the globe say that in this crucial, “make-or-break decade” to limit global warming, it’s time for countries to unite, and to turn words into action. The group of African negotiators say that “international solidarity as expressed through a spirit of multilateralism and international cooperation” should be the key operational principal for COP 27.

“Developed countries need to live up to their duty to lead by achieving zero-emissions well before mid-century,” they add. That echoes the findings of a Climate Analytics report that says the European Union would need to cut its domestic emissions faster than currently planned and reach net-zero GHG emissions between 2040 and 2045 to be 1.5°C compatible.

But the EU, along with the 19 other major economies in the G20, provided $693 billion in support to oil, gas, and coal in 2021, according to a BloombergNEF report. That was a 16% increase from 2020, and the industry that produces the dirtiest fuel—coal—received $20 billion in government support last year.

The funding translated into new investment in emissions-intensive equipment and infrastructure, said lead author Victoria Cuming, head of global policy at BloombergNEF. It came after multiple scientific reports warned no new fossil development could be approved in a 1.5°C pathway.

G20 and G7 governments “always seem to include imprecise language and caveats” in their climate pledges, said Cuming.

But COP organizers insist this year’s summit will be about action, not loophole-filled pledges that governments manage to skirt around. “According to the vision statement from the Egyptian COP Presidency, COP 27 will be about moving beyond negotiations and “planning for implementation for all these promises and pledges made,” says UN News.