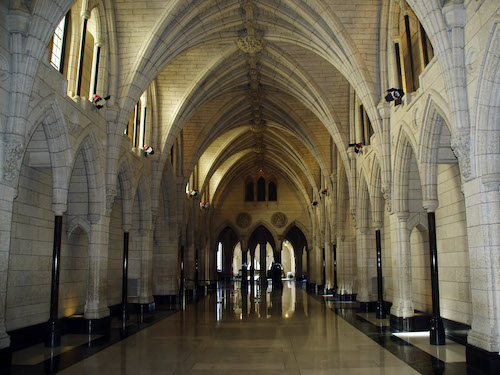 A pitch for private investment in emission reduction projects, including tax credits for renewable energy, low-carbon heating, and clean hydrogen, is one of the highlights of the fall economic statement released Thursday by Finance Minister Chrystia Freeland.

The statement also introduces a 2% tax on share buybacks, a well-established method of returning money to shareholders that fossil companies have visibly favoured in a moment of record profits, rather than investing in the emission reduction technologies they’ve been promising to develop. “While buying back shares is one legitimate way that corporations can return value to their shareholders, it can also divert corporate resources away from making investments in their workers and businesses in Canada,” the statement says, in a section on building a fair tax system.

And despite several weeks of media messaging and intensive private lobbying for an increase in Ottawa’s already-lavish, C$7.1-billion federal subsidy for carbon capture, utilization, and storage, the acronym “CCUS” only shows up once in the document.

Many of the provisions in the economic statement parallel credits and incentives in the U.S. Inflation Reduction Act (IRA), amid concerns that Canada would lose investment if it failed to match the momentum of its biggest trading partner. “We want to make sure that Canadian companies remain competitive and that international investors that come to our jurisdiction are able to take full advantage of the tax credits,” Associate Finance Minister Randy Boissonnault said, in the days leading up to the announcement. “Our government is very seized with this issue of the Inflation Reduction Act and how to make sure we don’t have a big gap between our two countries.”

See Saturday’s Energy Mix Weekender for an analysis of the economic statement and its implications for Canada’s energy transition.

The main climate and energy commitments in the economic statement show up in a section on economic competitiveness and job creation, with a surrounding narrative that emphasizes energy efficiency, low-carbon technologies and services, green supply chains, and a half-dozen big announcements so far this year on electric vehicles, batteries, and the critical minerals they depend on. With the launch of the previously-announced Canada Growth Fund, the statement points to “trillions of dollars in private capital waiting to be spent in creating the good jobs and prosperity for workers that a net-zero economy will bring,” adding that Canada “is competing with other countries to attract the private investment we need.”

Those factors justify incentives for companies to “take risks and invest in cutting edge technology in Canada,” the statement says, plus public funding to attract the private capital the transition will need. The announcement directs the Growth Fund to unlock investments in CCUS and low-carbon hydrogen, alongside the new 30% investment tax credit for solar, wind, waterpower, electricity storage, low-carbon heat, and zero-emission vehicles for industry.

The full value of the tax credit, pegged at $6.7 billion over five years, will only be available to companies that adhere to a set of mandated labour standards—otherwise, they’ll have to settle for a 20% credit, rather than 30%. The standards require tax credit recipients to pay prevailing wages based on local market conditions and ensure training opportunities for apprentices.

The statement promises consultations on how to set up a clean hydrogen tax credit based on the life cycle carbon intensity of the different production processes for the potentially green fuel. It focuses measures on advanced manufacturing competitiveness on “clean technologies, including electric vehicle and battery manufacturing,” and cites ongoing work on critical minerals like lithium, nickel, cobalt, and rare earth elements.

And it includes funding for a “strong and efficient federal impact assessment regime” for major projects that ensures benefits for Indigenous communities.

Not a Good Day for Fossils

The big surprise Thursday was Ottawa’s decision not beef up the existing federal subsidy for CCUS after the swashbuckling free enterprisers at the Pathways Alliance, which represents 95% of the country’s oilsands production, said they wouldn’t commit to CCUS development without a big increase in taxpayer subsidies. News coverage in the immediate aftermath focused on the 2% share buyback tax, with Business Council of Alberta President Adam Legge warning the measure could undercut fossil industry investment.

“It’s disappointing that Canada’s first commitment in response to the United States Inflation Reduction Act is a policy ‘stick’ rather than details around more incentives or ‘carrots’, which are what we need to get these investments moving,” Legge told the Globe and Mail in an email. “This policy will discourage investment, unduly affect Alberta businesses, and do very little to drive reinvestment into Canadian projects.”

CBC tallied the buybacks so far by major Pathways Alliance members at $18.7 billion—including $2.5 billion by Cenovus Energy, $4.6 billion by Suncor Energy, $5.1 billion by Canadian Natural Resources Ltd., and $6.5 billion by ConocoPhillips—adding that the 2% tax is expected to bring $2.1 billion to federal coffers over five years.

“Buybacks don’t improve or expand a company’s underlying business, but they have the effect of driving up share prices and improving various profitability metrics by reducing the amount of shares in the company, which investors tend to welcome,” the national broadcaster explained.

Despite the industry complaints, Pembina Institute Senior Advisor Scott MacDougall said the share buyback provision isn’t too far off the 1% tax the U.S. introduced in the IRA.

“It’s not going to stop share buybacks,” he said in an interview. “It’s not intended to. It’s really only intended to shift some of that money and redirect it back to Canada in terms of hopefully investments, hopefully jobs, and maybe even more hopefully, investments that are going to lead to decarbonization. But I guess time will tell.”

The economic statement drew mixed reviews from climate and energy policy analysts, some of whom had been bracing for another big federal payday for the fossil industry.

“This is a welcome and encouraging change of tone, with a long overdue acknowledgment that Canada needs real green industrial policies in which workers play a central role,” said Aliénor Rougeot, climate and energy program manager at Environmental Defence Canada. But “as often with this government, a good promise now needs to be backed up by better plans. The proposed support to workers falls short of what is needed for the government to meet its promise of just transition, from too little money to too narrow a scope,” and Ottawa still hasn’t delivered on an approach where workers, Indigenous nations, and communities “are actually at the negotiating table.”

Julia Levin, national climate program manager at Environmental Defence, said the investment tax credit is just “a fraction of what is on offer in the United States,” and still falls just short of the CCUS tax credit in Freeland’s 2022 budget. While Ottawa “resisted fossil fuel lobbyists’ demands for huge new carbon capture subsidies,” Levin said, “there is still the risk of new money for carbon capture and fossil hydrogen if strong rules are not placed on the Canada Growth Fund and new hydrogen tax credit.”

Climate Emergency Unit Team Lead Seth Klein agreed the plan falls short of what government would do if it were really treating the climate crisis as an emergency. “Hate to be a wet blanket, but this seems like pretty thin gruel to me,” he tweeted.

Funding for training, apprenticeships, and sustainable jobs adds up to just $310 million over five years, Klein noted. The clean technologies credit “is actually pretty light with respect to the spending needed on decarbonization,” and the overall strategy is based on “attracting private investment (in a ‘competition’ with other jurisdictions), rather than using government spending to generate new investment.”

The overall sense is of a government that “seems so reticent to actually spend real dollars directly on the climate infrastructure we need,” he wrote. “Also, where the hell is a windfall profit tax on oil and gas companies and all the other industries profiteering on the current crises? Its absence is a huge lost opportunity to show how we act with social solidarity.”

Vanessa Corkal, senior policy advisor on clean energy transitions at the Winnipeg-based International Institute for Sustainable Development, called the sustainable jobs announcement a good start. “But just transition will require much more funding to meaningfully get off the ground, and we’re still waiting for legislation to entrench key principles and creation of a just transition strategy for Canada,” she said in an email.

Like Levin, Corkal said her organization would be keeping a close eye on the Canada Growth Fund and the hydrogen tax credit to make sure there’s no financial support for CCS—or for “blue” hydrogen projects that won’t be cost-competitive beyond 2030.

The Pembina Institute called the 2% tax on share buybacks “an indication that the federal government wants to see Canada’s oil and gas sector invest its record profits in Canada, and in a way that is aligned with the sector’s need to urgently reduce emissions.”

Klein interpreted the economic statement’s emphasis on concessional loans and contracts for difference as a way to “offer private investors a risk guarantee against the very real possibility that the Conservatives will get elected and reverse the carbon price.” MacDougall said the contracts for difference “will work with and not compete with Canada’s existing carbon pricing system and help manage risk of future changes and impacts of the carbon price signal” coming from the federal rules.