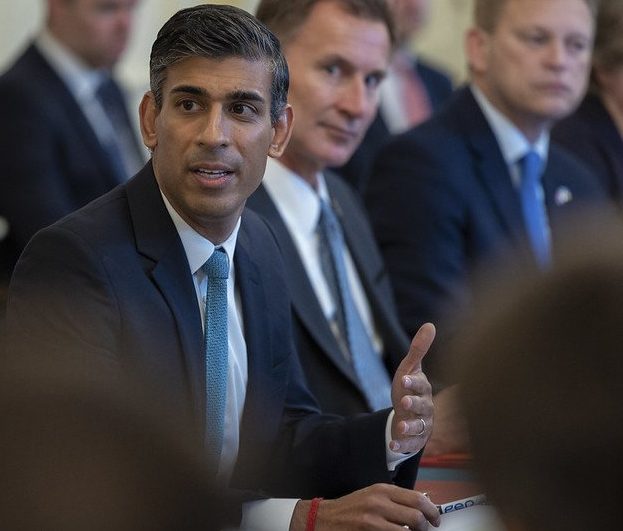 The future of fracking, along with nature conservation payments to farmers and binding environmental targets, had headed at least one list of climate issues facing Sunak, the UK’s third prime minister in eight weeks, as he enters 10 Downing Street in the midst of an inflation crisis, the COVID-19 recovery, and anxiety over Russia’s war in Ukraine.

In a short Reuters dispatch Wednesday, a Sunak spokesperson said the new PM would uphold the fracking ban, after Truss declared she would allow the methane-intensive extraction method where local communities support it. Her climate-denying business secretary, Jacob Rees-Mogg, had famously said he would happily see a fracking rig in his own back yard, though the Guardian reported early this month that his neighbours did not share that delight.

The now-former PM “angered many climate activists by overturning a ban on fracking and proposing to scrap hundreds of environmental laws, in what critics dubbed a ‘war on nature’,” the Washington Post reports. Now, “environmentalists are hopeful that [Sunak] will take steps to bolster the UK’s international climate reputation just weeks before the next United Nations climate summit, which he is expected to attend.”

“Our hopes are that he’ll be better than Liz Truss, although that’s a low bar, frankly,” Greenpeace UK Policy Director Doug Parr told the Post. “But we’ll very much have to see what he actually does.”

“If the removal of COP 26 President, Alok Sharma, from the cabinet is any indication of Rishi Sunak’s stance on the climate crisis then we need to fight harder for a #LossAndDamage fund,” wrote Christian Aid, in a tweet responding to Lucas’.

Sharma, who will continue his UN engagement until COP 27 convenes in Sharm el-Sheikh, Egypt in just under two weeks, took questions from MPs on the UK government’s emission reduction plans just minutes after he was dumped from cabinet, the Belfast Telegraph reports.

“In terms of new oil and gas licences, I think what the UK government, indeed every government, has to demonstrate is how are the policies that we’re putting forward consistent with legally binding commitments on, in our case, getting to net-zero by 2050, or indeed our near-term carbon budgets,” Sharma said. “The onus is very much on the government to explain and demonstrate how any of these policies are indeed consistent with the legally binding commitments.”

That was while official data showed the UK on track to “emit nearly double the amount of [carbon] pollution as it should do under its 2030s goals,” the Evening Standard writes. Government plans are built on a commitment to cut emissions 58% from 1990 levels by 2032, and 77% by 2037. But the latest numbers from Rees-Mogg’s former ministry show those targets “will be missed by 73 million tonnes of greenhouse gases, a 56% reduction on 1990 levels.”

In an assessment published yesterday, East Grinstead, UK-based edie.net lists the fracking ban as the first of seven “pressing green policy challenges” on Sunak’s to-do list. The rest of the list includes:

• Next steps on a set of environmental targets that its proponents admitted were not science-based, comprehensive, or ambitious;

• Avoiding a “race to the bottom” on post-Brexit environmental and workplace standards;

• Adopting an energy security bill that would reduce investment risk for technologies ranging from low-carbon hydrogen to carbon capture and storage;

• Correcting the national net-zero strategy after the British High Court deemed it “unlawful” in a July, 2022 ruling.