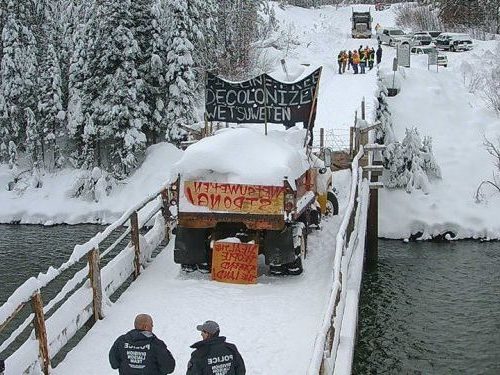 Coastal GasLink and a former prime contractor with alleged links to organized crime are being sued by four companies, working in partnership with three First Nations communities, for allegedly failing to pay an outstanding C$10 million for services rendered.

Kyah Resources Inc., Frost Natanlii LP, NWF Resources Ltd., and Kyah Summit Camp Services all say that while they completed their contracts in full, they have yet to be fully paid, writes The Tyee. The first three companies were hired to help clear the route for the intensely controversial pipeline, while the fourth provides worker accommodation.

The four companies are all associated with three northern B.C. First Nations communities.

Most immediately on the hook for the outstanding payment is Pacific Atlantic Pipeline Construction Ltd. (PAPC), a Canadian subsidiary of the Parma, Italy-based Bonatti Group, which describes itself online as an energy services contractor with more than 75 years’ experience and a world leader in pipeline construction. The company was first contracted by Coastal GasLink in 2018 and, at the height of its involvement, was responsible for more than a third of the 670 km pipeline’s construction.

“In selecting our prime contractors, we sought out highly qualified companies that met our core principles for safety, environmental stewardship, and stakeholder engagement,” Coastal GasLink stated, when it introduced PAPC on its website in 2019 as the last of four companies awarded a total of $2.8 billion in construction contracts.

The company’s relationship with PAPC has since soured. TC Energy, CGL’s Calgary-based parent company, told The Tyee in an email that it terminated PAPC’s contract “due to numerous ongoing problems, including the non-payment of subcontractors.”

According to a 2016 study by the Prague-based non-profit Bankwatch Network, PAPC’s parent company Bonatti has been linked more than once, albeit through its sub-contractors, to “cartels, corruption and the mafia,” the Guardian wrote at the time.

Coastal GasLink is now “responding to ‘several’ lien claims based on the alleged unpaid bills” and has confirmed it “will comply with its obligations under the B.C. Builders Lien Act,” writes The Tyee. Under that law, “contractors and suppliers can hold owners of a construction project accountable for outstanding debts by filing a claim on the assets.”

Majority owned by the Witset First Nation, a Wet’suwet’en community with about 1,800 members located 400 kilometres west of Prince George, Kyah Resources says PAPC owes more than $3.7 million in unpaid work, while Kyah Summit Camp Services, a collaboration between the Witset and a Smithers company, says it is owed $3.6 million.

Finally, the Nadleh Whut’en First Nation, a Dakelh community of 500 also located near Prince George, has filed its own joint claim with Frost Group—a group of companies whose primary industry is logging—alleging unpaid invoices in excess of $600,000.

In its email to The Tyee, TC Energy expressed its concern about how PAPC’s failure to pay “will have an impact on the communities which benefit from their partnerships with the project.”

“We are taking appropriate steps through the legal process in order to resolve all lien claims and have urged PAPC to expedite a resolution and pay amounts owing,” the company said.

The Coastal GasLink pipeline has faced fierce opposition over the years from a group of Wet’suwet’en Nation members and the Nation’s hereditary chiefs. Efforts to block the pipeline—which is planned to run between northeastern BC and Kitimat—from running through Wet’suwet’en traditional territory have been met with “high-profile police actions and dozens of arrests in recent years,” says the Tyee.

Project costs have more than doubled since construction began, and the pipeline has been cited for more than 50 environmental violations since 2019. In the face of ongoing opposition, Coastal GasLink has consistently pointed to impact benefit agreements signed by First Nations leaders along the pipeline route to indicate support for the project.