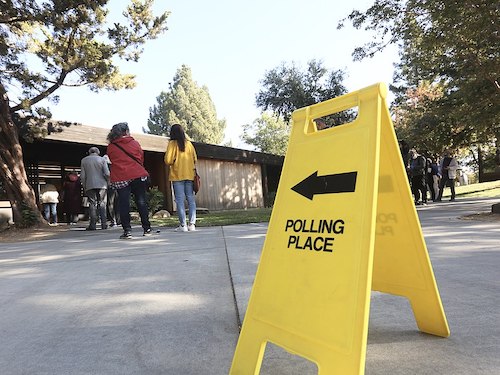 With Ontario’s municipal elections around the corner, environmental advocates are urging citizens to use their vote to push for climate action.

For the sake of the climate and our communities, but also for our collective and individual mental health, “don’t just hope for climate action—head to your municipal election voting booth,” writes newly-appointed Ecology Ottawa Executive Director Alice Irene Whittaker, in an op-ed for the Toronto Star.

Identifying the unhealthy swing between hope and despair many of us experience as we grasp snippets of happier stories within a torrent of bad climate and environment news, Whittaker advised against searching “for shaky hope from the quiet of our screens.”

Far better to become a participant in “concrete, ambitious action,” such as voting in a municipal election. Describing voting as an action both “imperative” and “invigorating,” Whittaker writes that “political participation creates solidarity, deepens community and builds resilience.”

The first step is to get informed, and Whittaker urges readers to “read up on their local mayoral and city council candidates and become informed on the climate action they plan to take.”

Ontarians living in the 905 area code who support increased density to protect remaining farmland, lower emissions, and build healthy, sustainable communities, will want to acquaint themselves with the many candidates involved in a number of #StopSprawl groups that have been gaining strength, writes climate campaigner Michelle Tom, in another Star op-ed.

In an evolution that “the Ford government and sprawl-backed municipal politicians did not see coming,” a grassroots movement in strong support of denser, more walkable, 15-minute communities has spread across southern Ontario, Tom writes.

Because truly collective action must involve everyone, Whittaker urges readers to move outside their own bubbles before and after the election, engaging in “authentic conversations with people who have traditionally been excluded from the mainstream environmental movement or who hold different political views.”

That kind of conversation builds trust, which is the key to the collaboration that advances common goals like happy and healthy neighbourhoods and personal well-being.