Canada Will ‘Bend the Curve’ on Emissions, Keep Up with U.S. Incentives, Trudeau Says 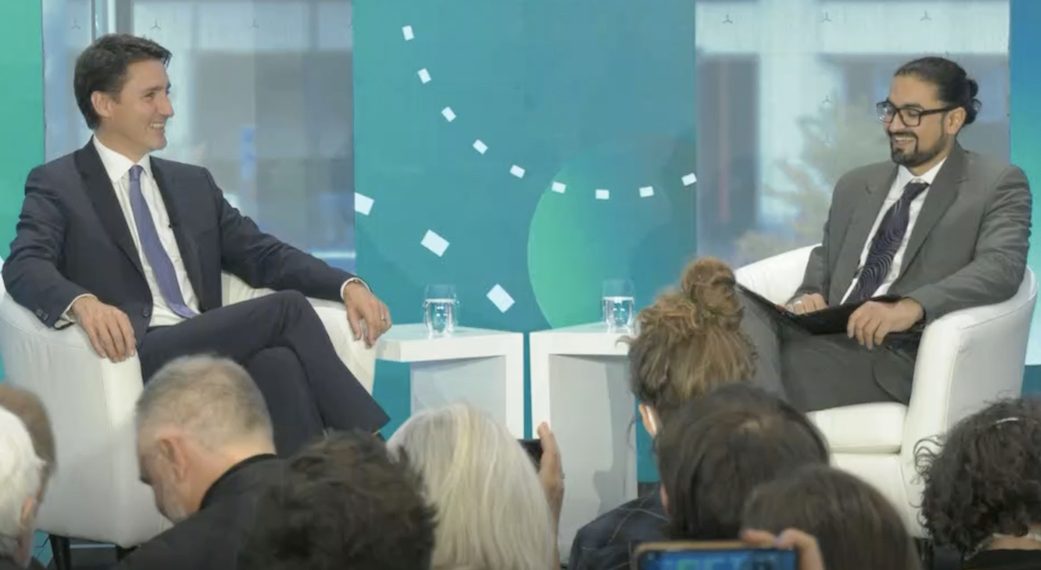 Canada will meet its climate targets and “bend the curve” on emissions, while the United States enacts new incentives to make up for its failure to put a price on carbon, Prime Minister Justin Trudeau said Tuesday during a last-minute appearance at a climate conference in downtown Ottawa.

While “we spend a lot of time talking about the imperative, the challenge of fighting climate change,” hitting the target “is not just politicians talking, “Trudeau told Bloomberg News climate columnist Akshat Rathi, during a half-hour onstage interview at a hybrid live-virtual event hosted by the Canadian Climate Institute and the Net-Zero Advisory Body.

“It’s actual investments. It’s actual deliverables. It’s showing that we have this path that is no longer a political debate,” he said. To the extent that that debate persists in some corners of Parliament, he added, it “just shows that some people are not getting it”.

Even so, “citizens are realizing both from extreme weather events, but also from good jobs and solid investments in industries, that that shift is here and it’s coming,” Trudeau said. After years of negotiation and lots of complexity to get a national carbon price in place, the benefits of that longer-term strategy have begun to “click into place” over the last couple of years.

“Alberta politicians will say what they say,” Trudeau said. “But Albertans and industry are saying, how do we get the pace right to decarbonize quickly while providing the short-term energy needs that Ukraine and global instability will require, even as we accelerate the transition.”

Rathi pointed to Environment Commissioner Jerry DeMarco’s recent warning that the government’s 2030 emission reduction plan is over-optimistic, adding that Canada has the worst climate performance among G7 nations. Trudeau maintained the federal plan is beginning to produce results and “we are on a track to hit our carbon reduction targets.”

The PM pointed to major industry investments like the C$400 million that Hamilton’s ArcelorMittal Dofasco is committing to replace a coal-based steel production process with electric arc furnaces. That decision boosted the company’s competitiveness, “but what they also highlighted was that that price on pollution was going to be hundreds of millions of dollars in penalties for them by 2030,” he said. The certainty of a steadily rising carbon price “was a big incentive, and making sure we lay out those incentives for people to move forward in the right way sends a signal to investors all over the world.”

Trudeau echoed a flurry of recent analysis showing that Russia’s war in Ukraine has accelerated the global shift off fossil fuels. He said Canada has increased fossil fuel production by 300,000 barrels per day to help deliver emergency supplies to Europe, but has been much more interested in promoting the green hydrogen from “a dozen or so” new projects powered by offshore wind.

The PM didn’t specify where those projects would be located or how soon they would come online. Nova Scotia’s recent promise of five gigawatts of offshore wind by 2030 actually translated into a still-to-be-determined output of electricity, likely available around 2038.

Trudeau also suggested a path for Canada to increase fossil fuel production. “We’re not focused on increasing emissions at all. We’re focused on reducing our emissions,” he told Rathi. But “if the companies can cut emissions, then there is room within that to increase production.”

Rathi pointed out that that scenario would depend on successful carbon capture and storage technology and asked how Canada will compete against new CCS tax credits included in the Biden administration’s US$369-billion Inflation Reduction Act. Trudeau listed a series of competitive advantages Canada can offer, including a highly educated work force, the quality of life many families enjoy in Canadian cities, and the “resilience, stability, and predictability” of a long-term climate plan and carbon price.

“We can offer the best cash sweetener incentive. They’ll look for that, and they’ll take the money,” he said. “But they’re also looking for where those jobs and workers are going to come from.”

Whatever Biden does, “we’re going to absolutely stay competitive,” Trudeau added. “But one of the reasons the U.S. has to do so much more is they don’t have a price on pollution. They have to do through regulations and incentives and subsidies what we are already doing.” Rathi noted that 90% of the fossil industry is exempt from the floor price on carbon, but Trudeau said oil and gas producers are still “very aware” that price will be rising in annual increments through 2030.

“They are changing their behaviours because of it and they’re being great partners,” he said, just days after the oilsands sector’s Pathways Alliance demanded further federal subsidies before finalizing a plan to invest C$24.1 billion in carbon capture and storage projects.

Just days before Trudeau’s conference appearance, Bloomberg reported that Ottawa was laying plans to “even the playing field with the U.S. on investment incentives for carbon capture and other clean energy projects.” The news agency said the government will likely “signal its intentions next month or in early December, with a more detailed policy to come in a budget in the first half of 2023.”