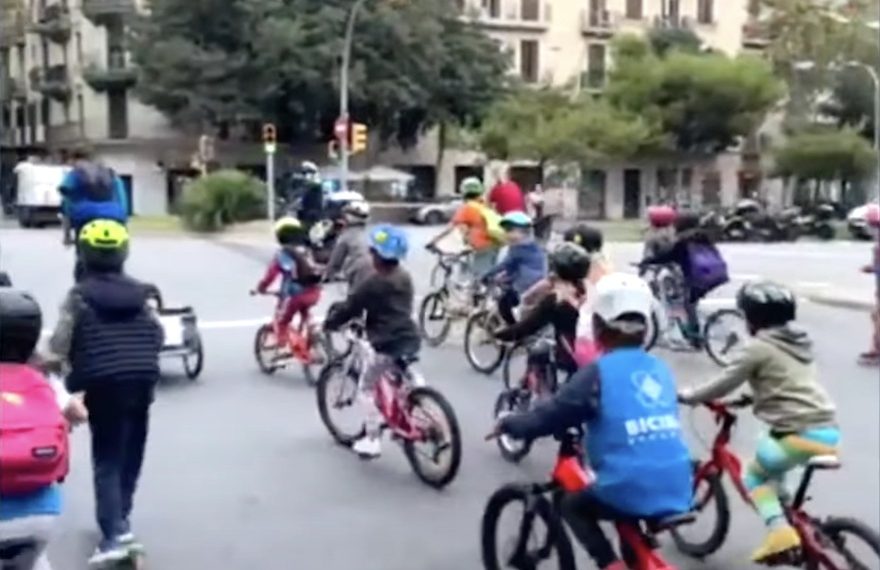 A weekly “bike bus” to school gives 170 elementary students, a 65-pound golden doodle named Phoebe, and the Portland, Oregon neighborhood through which they ride a jolt of “sheer joy,” while helping to build a stronger, safer, more connected community.

“Every Wednesday morning, people in Portland go to their windows and stand on their stoops to watch a group of about 170 children roll by on their bikes, music trailing behind them, sometimes drowned out by the kids’ excited chatter. The onlookers cheer and take photos,” writes the Washington Post.

“This brings so much joy to so many people. It’s the coolest thing,” Alison Warlitner told the Post. Warlitner’s six- and seven-year-old children attend Alameda Elementary and are enthusiastic participants in the “bike bus” commute.

Alameda physical education teacher Sam Balto, who got the bike bus off the ground and leads the caravan of student bikers each week, told the Post he’s noticed how the morning ride improves students’ ability to focus in class.

Like the “walking school buses” that Balto started in 2016 while teaching in Boston, the bike bus also strengthens the school’s sense of community.

“When we can provide more opportunities for children to connect with their peers, they absolutely love it,” Balto said. “It’s how we build stronger, more connected, safer school communities.”

Exemplifying the strength if its community, when there were children who couldn’t participate because they didn’t have access to a bike, the Alameda school community provided them with one.

Knowledge of Alameda’s bike bus is spreading, thanks in part to Balto, who shares videos of the weekly caravan of bikes and happy kids on social media in the hope of inspiring other schools.

“These videos are really touching something in people,” he said. “There’s a sense of joy and freedom that they see with the children biking, but it also gets them to stop and reflect on how we can do student transportation differently.”

Warlitner said a TikTok video of the bike bus she posted received more than seven views in a single week. “She said she thinks it hit a nerve because of the sheer joy it spreads,” writes the Post.

Ian Downard, who helps to lead the bike bus every Wednesday with his two children and their golden doodle Phoebe (check out her goggles), said he was deeply touched by the idea when he first heard of it this spring.

He, his kids, and Phoebe are now devoted participants in the weekly caravan. “The whole thing is just such a delight. It’s nothing but goodness,” Downard said.