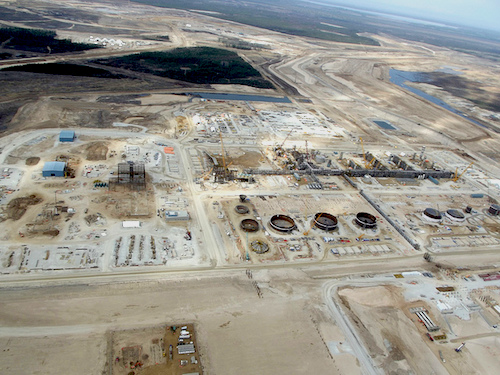 Canada’s fossil industry saw its greenhouse gas emissions per barrel of oil extracted grow 3% between 2010 and 2020, even as oil and gas lobbyists insisted they were working to drive down their carbon footprint.

The startling admission, based on independent data from Rystad Energy, comes from a fact sheet published by the self-styled Canadian Energy Centre, the taxpayer-funded and often hapless “war room” set up by the Jason Kenney government in Alberta to defend the industry from criticism.

The story turns on the difference between the industry’s definition of “emissions intensity” and the absolute emission reductions of 45% this decade that will be needed to avert the worst impacts of climate change. Emissions intensity is a measure of carbon pollution per barrel of oil produced—so if emissions per barrel fall, but oil production rises at a faster rate, the industry’s overall emissions still increase.

But now, the war room’s numbers say the industry as a whole fell short of its own very modest target. Its fact sheet says emissions intensity increased “by just 3%” over the decade, even as industry representatives relied on precisely that measure to claim progress on their climate impact. Total production grew 41% between 2010 and 2020, the Rystad data showed.

The war room says Canada’s results for the decade were “better than a number of peer countries,” with Mexico, India, Iran, Iraq, the United Kingdom, and others seeing their emissions intensity rise even faster. But the fact sheet lists several countries that managed to reduce their emissions intensity, including Kazakhstan at 27%, the United States at 26%, Brazil at 17%, and Turkmenistan at 15%.

One part of the analysis singles out the Alberta oil sands as the source of the increase—excluding that part of the industry, carbon dioxide per barrel fell by almost 12%. Elsewhere, the fact sheet says the oil sands reduced their emission intensity 21%, but saw production rise by 114% over the same period. Those numbers point to a dramatic increase in actual emissions.

From the Rystad data, the war room draws the conclusion that “the Canadian upstream oil and natural gas sector is making steady progress versus many peer countries on its CO2 emissions per [barrel of oil] produced,” even though its performance is “influenced by higher levels of emissions intensity found in the sands sector.”

In August, the fossil industry dismissed the federal government’s proposed emissions cap on oil and gas, a measure that 70% of Canadians said they supported last fall, as “aggressive” and “unrealistic”. Last month, the Pembina Institute reported that the country’s leading oil sands producers are steadfastly refusing to invest significantly in new decarbonization projects, even though they’re flush with record profits.

In a release yesterday, Dave Gray-Donald, oil and gas program manager at Environmental Defence Canada, said the industry-wide increase in emissions intensity likely reflected methane releases due to a boom in oil and gas fracking and a shift to a more emissions-intensive process in oil sands mining.

“For years, Canada’s oil and gas industry has claimed that the industry is reducing the emissions intensity of its products,” Gray-Donald said. “So it is revealing to learn that, in reality, the opposite has happened. Overall, this means that every barrel of oil or cubic metre of Canadian oil and gas is on average more polluting today than it was a decade ago.”