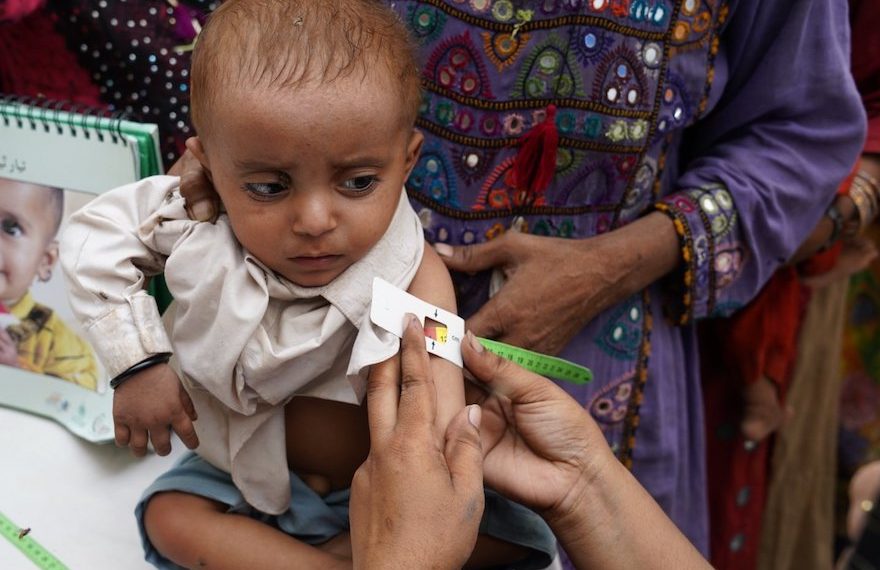 As Pakistan deals with the aftermath of devastating floods and links with global warming become clearer, a demand for climate reparations from the world’s top emitting countries is gaining momentum ahead of next month’s COP 27 climate summit in Egypt.

Since mid-June, more than 33 million people have been affected by record flooding that left one-third of the country under water, Inside Climate News reports, in a post republished by Undark. For weeks now, thousands of families from the southern province of Sindh have taken refuge alongside the national highway in Pakistan, one of the main arteries connecting the country’s four provinces. The unrelenting rains have claimed more than 1,500 lives, at least a third of them children, as the death toll has continued to rise every day since the beginning of the monsoon season.

The southwestern province of Balochistan and the southern province of Sindh have been the worst hit, with more than 500,000 people currently living in shelters. Across the country, more than 750,000 livestock have died and over three million acres of agricultural land have been completely washed away. Agriculture accounts for more than a quarter of Pakistan’s economy. Of the country’s 154 districts, 116 are severely affected and 80 have been declared “calamity hit.”

I call on the international community that Pakistan needs massive financial support, as according to initial estimates the losses are around $30 billion,” said UN Secretary General António Guterres told a September 9 news conference in Islamabad.

A Legacy of Colonialism

While gaps in Pakistan’s own disaster management increased the nation’s vulnerability, experts say climate change, and consequently the world’s top-emitting countries, are directly responsible for the scale of the unimaginable devastation across the country.

A colonial legacy of extracting resources from the Global South to enrich the Global North and emitting vast amounts of greenhouse gases into the atmosphere in the process has brought some of the world’s most vulnerable populations to the front lines of climate change impacts.

“That’s the effect of colonialism,” environmental lawyer Ahmad Rafay Alam told Inside Climate. “It’s tied to greenhouse gas emissions, and the responsibility the Global North has to us in South Asia suffering the impacts of the climate crisis.”

An erratic monsoon followed by some flooding is not a new phenomenon in Pakistan, but the scale of devastation caused by the 2022 floods is unprecedented.

“This did not happen overnight,” said Mohsin Hafeez, country representative for Pakistan at the International Water Management Institute. In March, parts of South Asia, including central and southern Pakistan, experienced a record-breaking heat wave made 30 times more likely by climate change, scientists said. Temperatures across the country remained high, with parts of Pakistan reaching more than 120°F for extended periods of time.

The unprecedented heat wave also triggered glacial melt in the northern region of the country. Pakistan, which has over 7,000 glaciers, the most in any country outside the polar region, experienced more than 16 glacial lake outburst floods this year.

Every 1/10 of a Degree Matters

And a warmer-than-usual summer led to a much wetter monsoon in the region. As temperatures rise and the air becomes warmer, it begins to hold more moisture.

“With every tenth of a degree of global temperature rise, the potential for more extreme and also longer-lasting heavy rainfall events increases in areas that are already struggling with frequently recurring climate risks,” said Peter Hoffman, meteorologist and climate scientist at the Potsdam Institute of Climate Impact Research. In May, the Pakistan Meteorological Department had predicted above-normal rainfall would follow the intense heat wave. But even with those early warnings, “the monsoon was completely out of proportion for the south of the country,” said Dawar Butt, an independent environmental policy consultant.

As the skies clear up across Pakistan, the damage from the floods is becoming more evident. More than a million homes across the country have been damaged, forcing families to live in makeshift tents and government shelters or move to urban centres towards the south of the country. Local administration estimates Karachi, the most populous city in Pakistan, has already received more than 50,000 people from flood-affected areas with more expected to make their way to the city.

And among the people stuck in their towns and villages cut off from aid networks, concerns of disease outbreak, gender violence, and maternal mortality remain high.

The World Health Organization has classified the floods in Pakistan as a grade 3 emergency, the highest within the agency’s internal grading system. People who have been displaced are now living in camps and tents, surrounded by stagnant water that is turning into a breeding ground for disease-carrying mosquitoes.

Even though the rains have slowed, the floodwaters haven’t receded and major health risks are emerging out of every disaster-hit corner in the country. “There is now a high risk of water-borne, deadly diseases spreading rapidly—diarrhea, cholera, dengue, malaria. Without adequate sanitation, communities are increasingly having to resort to open defecation, putting them at high risk of contracting diseases,” UNICEF Pakistan representative Abdullah Fadil told a press briefing in Geneva. More than 40% of the children in flood-hit areas were already suffering from stunting and are now at heightened risk of contracting diseases. “There is therefore a risk of many more child deaths,” said Fadil.

When disaster strikes, women and children are 14 times more likely to die than men.

According to the Sindh Health Department, more than 50,000 people from flood-affected areas have contracted diarrhea over the last two weeks.

The United Nations Population Fund estimates more than 650,000 pregnant women in flood-hit areas across Pakistan require immediate medical assistance. More than 73,000 women are expected to give birth this month. But the floods have damaged Pakistan’s already weak health care infrastructure. More than 1,000 medical facilities have been partially or completely destroyed across the country.

“No government, no matter how powerful or wealthy, would be able to handle the effects of this catastrophe on their own,” said Michael Kugleman, director of the South Asia institute at the Wilson Center.

The flooding has brought the already economically weak country to its knees, international development officials say. For months now, Pakistan has been experiencing inflation, shrinking foreign exchange reserves  and prices of basic goods soaring to record levels. Crop losses due to the floods are only expected to make matters worse. Nearly all of Pakistan’s rice and cotton crops, the country’s largest exports and a prominent source of employment in the agriculture sector, have been damaged. And as floodwaters take months to dry up completely, farmers are likely to miss the wheat planting season, too.

Despite political tensions, Pakistan is considering importing food from India to deal with shortages caused by the floods.

Guterres called for increased financial support for Pakistan after finishing a two-day tour of the country’s flood-ravaged areas. “I have seen many humanitarian disasters in the world, but I have never seen climate carnage on this scale,” he told a news conference with Pakistan’s foreign minister, Bilawal Bhutto Zardari.

From Humanitarian Aid to Reparations

In response to the crisis, the UN issued a global appeal for $160 million, and countries around the world have sent planeloads of aid. Cargo planes from Turkey and the United Arab Emirates carrying tents and food were the first to arrive. On Friday, the U.S. Agency for International Development announced $20 million in additional aid to support the people affected by floods in Pakistan. Previously, the United States had announced $30 million in humanitarian assistance.

But climate, environmental, and legal experts say this aid does not begin to meet the need in dealing with the damage that has been done. Pakistan accounts for less than 1% of global greenhouse gas emissions but it consistently ranks high among nations most affected by climate change. It also ranked eighth among nations most affected by extreme weather events between 2000 and 2019, according to Germanwatch, a non-profit environmental, trade, and policy organization based in Bonn.

In comparison, the U.S., which accounts for 28.8% of historical greenhouse gas emissions, ranks 109th out of 191 countries on a risk index published earlier this year by Inform, a consortium of humanitarian and development organizations affiliated with the EU’s Joint Research Center.

As the linkages between Pakistan’s devastating floods and global warming becomes clearer, there is resounding agreement among experts that high-emitting countries owe climate reparations to the Global South. Scientists at World Weather Attribution, a global collaborative, looked at Pakistan’s rainfall through the monsoon season and found that the extreme rainfall that caused such unimaginable devastation across the country was intensified by global warming.

“Undoubtedly, countries in the Global North bear responsibility and should pay their historical debt to more vulnerable countries,” said Friederike Otto, senior lecturer in climate science at the Grantham Institute for Climate Change and the Environment and co-founder of World Weather Attribution, in a written statement.

“This is carnage, there are millions of people who are going to die on account of global warming,” said Alam.

But even as an argument for high-emitting countries to take responsibility for climate change gains momentum, Pakistan’s road to recovery is long and hard. “Tough times ahead for us as a nation,” said Maaz Tanveer, communications director at HANDS Pakistan, a leading organization involved in aid work in flood-affected areas.