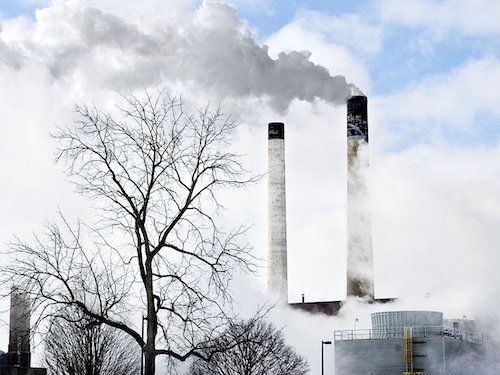 At the start of 2022, the Carlyle Group, one of the world’s leading private equity firms, published a report on its financial risk from greenhouse gas emissions. Yet something was not in the report.

Carlyle’s largest oil and gas investment, NGP, was not included, The Associated Press reports. A “note on scope” halfway through the document said this was due to a “different business model.”

As the climate crisis worsens and emissions get more scrutiny, what major companies decide to disclose is increasingly important. Carlyle, which has 26 offices around the world, almost 2,000 staff, and US$376 billion in assets, presents itself as different from the pack, claiming to “drive positive change,” with activities “grounded in driving real emissions reductions.”

Carlyle said this was its first such portfolio-level analysis. The company emphasizes its climate credentials, and an introductory note by then-CEO Kewsong Lee stressed the importance of transparency and disclosure.

“They are telling one story to investors and doing something else that gets results,” said Dr. Sean Field, of the Centre for Energy Ethics at University of St. Andrews in Scotland.

NGP is also a private equity firm, originally called Natural Gas Partners, with $10.4 billion under management at the close of 2021. Carlyle’s own filings show NGP is probably its most carbon-producing investment.

NGP makes up some 8% of Carlyle total earnings on average over the last five years, the company told AP in an email. But due to high oil and gas prices since the Ukraine war, in the first half of 2022 NGP made $512 million for Carlyle—more than 20% of its total revenues and 49% of its profit. If energy prices remain high, NGP is on track to earn $1 billion for Carlyle this year. NGP is currently trying to raise a $600-million fund for new exploration in oil and gas.

Jorge Guira, a professor in climate law and finance at the University of Reading, England, said it was telling that Carlyle’s mention of NGP appeared in a footnote. Although Carlyle was undoubtedly legally compliant, he said, its approach raises “challenging questions.”

That’s because U.S. companies are required to show good corporate citizenship, said Guira, who is also a member of the Florida Bar and a practicing lawyer for 30 years. “This reporting and exercise of duties may not meet everyone’s definition of that standard,” he said.

The company filing was made in accordance with 2017 guidelines issued by the Task Force on Climate-Related Financial Disclosures, prompted by G20 ministers and central bank governors. The guidelines are voluntary and help companies worldwide disclose the financial risks climate change poses to them, letting climate-concerned investors decide whether to own shares.

Under the TCFD guidelines, companies are told to disclose climate pollution by firms in which they invest, “if appropriate.” Carlyle’s report said its emissions for its largest majority-owned funds in 2021 were the equivalent of 79 tonnes of carbon dioxide per million dollars of revenue.

In light of this case, Guira called for reform of the TCFD to eliminate any wiggle room in disclosures.

The Private Equity Stakeholder Project is a non-profit that tracks the environmental impact of private equity firms. Executive Director Jim Baker said Carlyle should be “honest and transparent” with both the public and investors about its “full emissions and role in contributing to the climate crisis.”

Founded in 1988, NGP owns portions of more than a dozen energy companies. These include Texas-based Blackbeard Operating, which works in the Permian Basin and elsewhere in the U.S. In 2021, Blackbeard emitted almost twice as much methane as fossil fuel giant Chevron’s exploration and production business, according to research based on U.S. government data by the Clean Air Task Force.

Over a 20-year period, methane warms the planet 82 times more than carbon dioxide. Blackbeard did not respond to AP’s emailed request for comment.

Another NGP investment, Crimson Midstream, a holding company, is linked to a major oil spill. Crimson Pipeline, which was registered to the same address in Denver and shared a senior executive, spilled some 44,000 gallons of oil from a pipeline in Ventura County, California, in 2016 following a faulty repair. It took months to clean up and ended in a $1.6 million settlement in 2020.

NGP, which invested in Crimson in 2012 and then sold it last year, had no comment on this incident. It seeks to be a “performance leader” among responsible energy owners, the NGP spokesperson said. “We work closely with our portfolio companies to monitor environmental performance (and) set ambitious goals for performance improvement.” Crimson declined to comment.

Field, of St. Andrews, said rising fossil fuel prices have led to a bonanza for firms like Carlyle.

“The private equity people I talk to are making money hand over fist in a way they weren’t a couple of years ago,” he said. “Of course they want to be in this space.”

Carlyle is not the only company to come under fire over emissions disclosure in recent years, and by some measures could be considered a leader in its field. In 2021, Boston-based non-profit CERES found that only two of the private equity firms it interviewed had released standalone TCFD reports, Carlyle one of them.

Private equity is often opaque, AP explains. Carlyle is listed on the NASDAQ stock exchange. But most private equity firms are not publicly traded, and so don’t have to publish much data. One contributor to the CERES report opined that measuring the combined carbon footprint of private equity firms was “nearly impossible” due to poor data. However in this case, Carlyle confirmed to AP via email that it does have an emissions report from NGP. It would not share it, saying it is not free to do so.

Field called Carlyle a “symbolic leader” in its field on climate issues. Yet he said the company was technically fulfilling its responsibilities but displaying “slippery ethics”: while company officials talked about reducing emissions, the profitability of its fossil fuel investments was the bottom line.

Giant fund manager BlackRock made waves in the climate and finance world in early 2020 when its highly influential CEO, Larry Fink, in his annual letter, focused on climate change and said sustainability would be at the centre of its investments from then on. The next year the company was criticized for failing to say what proportion of its investments would be carbon neutral by 2050. It later clarified its “ambition” was for all assets under management to be at net-zero by 2050. Some have suggested asset managers can game the system, choosing which investments they include in climate targets.

Carlyle said that apart from companies it directly owns, it only publishes carbon emissions data for those where it has the right to make operational decisions. The relationship with NGP, in contrast, is indirect, through an investment vehicle, a Carlyle spokesperson said. The spokesperson asked not to be named, in line with company policy.

“These are longstanding commercial arrangements negotiated with NGP,” the spokesperson said.

Carlyle publishes no emissions data for any individual companies so it is “illogical to suggest that we are leaving out NGP’s emissions,” the spokesperson said.

However, in 2020, Carlyle did publish emissions data for at least two of its companies, Accolade Wines and Neptune Energy. It owns 100% of Accolade Wines.

The spokesperson clarified that when its companies have published their own greenhouse gas footprints, Carlyle may highlight them.

The company added that before the current high energy prices, NGP made up only 5-6% of its business. On climate change, the spokesperson said Carlyle was one of the first major private equity firms to commit to net-zero emissions by 2050, and is a member of various environmental initiatives.

It if were to simply divest from all energy companies, that would make its decarbonization “someone else’s problem,” the spokesperson argued.

But for Baker, at the Private Equity Stakeholder Project, that’s not good enough—because compared to its peers, he says, fossil fuels make up a far higher share of Carlyle’s profits. At the beginning of 2022, Carlyle had around $24 billion invested in fossil fuels, according to the Private Equity Stakeholder Project. The organization found Carlyle and NGP combined controlled scores of fossil fuel companies, more than any other large private equity firm. Carlyle told the AP it controlled management and policies of six hydrocarbon companies directly.

“Given their massive fossil fuel exposure, private equity firms like Carlyle have an urgent responsibility to address the significant role they play in propelling the climate crisis,” said Baker.

This Associated Press story was republished by The Canadian Press on September 26, 2022.