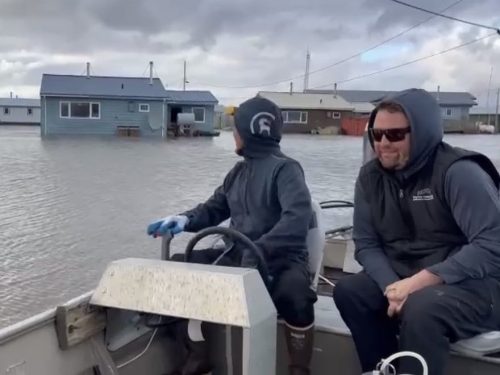 Authorities in Alaska were making contact Monday with some of the most remote villages in the United States to determine their food and water needs, as well as assess the damage after a massive storm flooded communities on the state’s vast western coast this weekend.

No one was reported injured or killed during the massive storm—the remnants of Typhoon Merbok—as it traveled north through the Bering Strait over the weekend, The Associated Press reports. However, damage to homes, roads, and other infrastructure is only starting to be revealed as floodwaters recede.

About 21,000 residents living in the small communities dotting a 1,000-mile (1,609-kilometre) stretch of Alaska’s western coastline—a distance longer than the entire length of California’s coast—felt the impacts of the storm.

Many homes throughout the region were flooded, and some were knocked off their foundations by the rushing waters propelled by strong winds. Officials were starting the process of determining damage to roads, ports, seawalls, and water and sewage systems.

The state transportation department said most airports in the area were open, and officials were making either temporary or permanent repairs to the runways that still have issues, said Jeremy Zidek, a spokesperson for the Alaska Department of Homeland Security and Emergency Management.

The storm remained stalled Monday in the Chukchi Sea near northwest Alaska, but it was rapidly weakening after influencing weather patterns as far away as California at its most powerful stage.

Coastal flood warnings were extended for an area north of the Bering Strait, since water will be slow to recede in towns like Kotzebue, Kivalina, and Shishmaref, said U.S. National Weather Service meteorologist Kaitlyn Lardeo.

Shishmaref had seen water surges 5.5 feet (1.68 metres) above the normal tide level, while Kotzebue and Kivalina had smaller surges. Both were still without power Monday, she said.

Alaska Gov. Mike Dunleavy on Sunday said five communities—Hooper Bay, Scammon Bay, Golovin, Newtok, and Nome—had seen serious impacts from a combination of high water, flooding, erosion, and electrical issues. Nome, where one home floated down a river until it was caught by a bridge, was among the many reporting road damage after recording tidal surges 11.1 feet (3.38 metres) above normal.

Zidek said state officials were looking closely at those five, but also reaching out to every community in the region because of the numerous reports of damage.

“While the needs may be greater in some, we don’t want to neglect those other communities that have minor issues that still need to be resolved,” he said. Efforts to reach some communities have been made more difficult by downed communication lines.

The state’s emergency operations centre is fully staffed with military, state agencies, and volunteer organizations to address the aftermath of the storm.

Alaska National Guard members in the western half of the nation’s largest state have been activated to help, either in the communities where they live or elsewhere along the coast, he said.

The American Red Cross has 50 volunteers ready to help and will be sent to communities that are in most need.

Most support personnel will have to be flown to these communities, since there are few roads in western Alaska. Providing air support will be the Alaska National Guard, small commuter airlines that routinely fly between the small villages, and possibly bush pilots.

Weather always has an adverse impact on flights in rural Alaska, but Zidek said the forecast seems favourable to conduct the response operations.

“There may be another smaller weather front coming in, but it’s nothing unusual for this time of the year,” he told AP.

Dunleavy said he would request a federal disaster declaration as soon as agencies gather necessary information about the damage. If the request is approved, the governor said the Federal Emergency Management Agency would cover at least 75% of eligible disaster costs, while the state would pick up the tab for the rest.

On Sunday, Dunleavy said time was of the essence because freeze-up, meaning the start of winter, can happen as early as October.

“We just have to impress upon our federal friends that it’s not a Florida situation where we’ve got months to work on this,” he said. “We’ve got several weeks.”

This Associated Press story was republished by The Canadian Press on September 19, 2022.