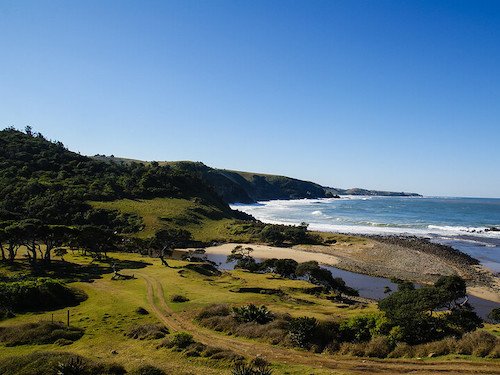 A South African court sided with environmental groups and local fishing communities to strike down an oil and gas exploration permit after two UK-based companies—Royal Dutch Shell and Impact Africa—failed to consult with local Indigenous communities.

“Meaningful consultations consist not in the ticking of a checklist, but in engaging in a genuine, bona fide substantive two-way process aimed at achieving, as far as possible, consensus,” wrote Makhanda High Court Judge Selby Mfanelo Mbenenge.

Cormac Cullinan, a lawyer representing Greenpeace in the litigation, remarked that the ruling is “a break from the past” that raises the bar for community consultations and environmental permitting.

“That’s an important precedent for other cases,” Cullinan said. “Both for community consultations and for assessing climate implications with exploratory projects like this.”

The permit issued by South Africa’s Department of Mineral Resources and Energy allowed Shell to map the ocean floor using seismic testing, a process that produces blaring sound waves. Shell partnered with Impact Africa—a London-based consulting firm focused on the African continent—and had plans to charter a seismic vessel trailing a six-kilometre array of airguns to shoot sound waves toward the seabed.

The operation would have taken place along South Africa’s “Wild Coast,” an area the roughly the size of Delaware that is home to Indigenous communities as well as endangered and threatened species of marine and terrestrial wildlife, reports Inside Climate News. Scientists have warned that the extreme noise produced during seismic testing endangers whales, dolphins, sea turtles, and other species that are sensitive to sound.

Environmental and human rights groups challenged the permit with two lawsuits claiming that Shell did not conduct a required environmental impact assessment or consult with local communities, and failed to consider the project’s climate change impacts and consequences for non-human species and future generations.

Shell and Impact Africa said those requirements were not in place when the permit was issued in 2014, and that adequate measures to protect wildlife—like pausing testing during whale migration periods—were already in place. Opponents countered that the companies’ permit renewal requests in 2017 and 2021 should have acknowledged and responded to scientific advances after 2014 that indicate the harm to marine wildlife caused by seismic testing.

The Makhanda High Court agreed to join the two lawsuits together and in a final decision struck down the permits. In his ruling, Mbenenge critiqued the consultation process carried out by Impact Africa, in which only monarchs and kings of communities were consulted.

Communication to the rest of the communities consisted of posting advertisements in local newspapers. They were not published in languages spoken by affected communities, and were only accessible to people with sufficient literacy skills and access to the publications, says Inside Climate News.

The companies also failed to consider the ancestral beliefs and cultural practices of the affected communities.

“The applicant communities contend that they bear duties and obligations relating to the sea and other common resources like our land and forests,” Mbenenge wrote in his ruling. “It is incumbent on them to protect the natural resources, including the ocean, for present and future generations; the ocean is the sacred site where their ancestors live and so have a duty to ensure that their ancestors are not unnecessarily disturbed and that they are content.”

The case is one of some 2,500 litigation cases against oil companies worldwide. For South Africa—a which emits more greenhouse gases than any other African country while simultaneously struggling with frequent blackouts and inadequate energy supplies—the ruling will carry weight in larger discussions about balancing energy security with decarbonization policies, Inside Climate writes.

U.S. Clean Energy Boom Must Leave No One Behind, Advocates Say