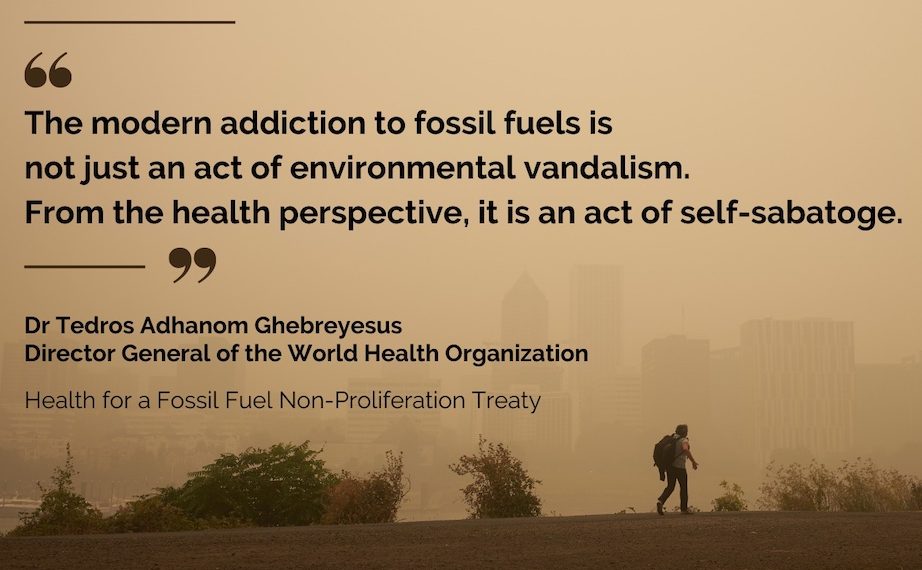 The World Health Organization and nearly 200 global health associations have endorsed the Fossil Fuel Non-Proliferation Treaty (FFNPT), calling for an end to new fossil infrastructure and a “fair and equitable” phaseout of existing production.

“The modern addiction to fossil fuels is not just an act of environmental vandalism,” said WHO President Dr. Tedros Adhanom Ghebreyesus. “From the health perspective, it is an act of self-sabotage.”

Drafting of the letter was led by the Global Climate Health Alliance (GCHA), Physicians for Social Responsibility, and Health Care Without Harm, the FFNPT campaign reported September 14. Other signatories include the International Pediatric Association, the World Medical Association, the Alliance of Nurses for a Healthy Environment, and the World Federation of Public Health Associations (WFPHA).

The letter urges governments to adopt a legally binding plan to:

• Phase out existing production and use of fossil fuels, consistent with a 1.5°C limit on average global warming, with high-income countries providing financial, technological and other support to help low- and middle-income countries make the transition;

• Fast-track “real solutions” that ensure a just transition for workers, communities, and countries that currently depend on fossil fuels.

Diarmid Campbell-Lendrum, coordinator of the WHO’s climate and health program, told the Guardian the letter was a watershed moment.

“This is the first time the health sector has come together to issue such a statement explicitly about fossil fuels,” he said. “The current burden of death and disease from air pollution is comparable to that of tobacco use, while the long-term effects of fossil fuels on the Earth’s climate present an existential threat to humanity—as do nuclear weapons.”

“We know that emissions have to be slashed to limit warming to safe levels, we know fossil fuels are the greatest driver of emissions, and we know that phasing out fossil fuels is the only way to reap many of the health co-benefits of climate mitigation—so why then are governments permitting new drilling, new mining, and new pipelines?” asked Liz Hanna, RN, PhD, environmental health chair at the WFPHA. “The science on this is clear: new fossil fuel development is completely incompatible with a healthy climate and a healthy future.”

“Fossil fuels are a key driver of climate change and pollution—affecting people worldwide but most insidiously vulnerable populations and low- and middle-income countries that suffer from higher exposure,” said Diana Picon Manyari, international climate director at Health Care Without Harm. “The phaseout of fossil fuels is the single most important public health intervention we can achieve.”

“As health professionals, we are struggling to protect the health of our communities from the impacts of climate change already here,” said internal medicine physician Laalitha Surapaneni, national board member of Physicians for Social Responsibility. “Leaving fossil fuels in the ground, where they belong, is a common sense public health measure… For my patients, clean air is medicine, and the Fossil Fuel Non-Proliferation Treaty, the prescription.”

“We are thrilled to see health professionals step out of their operating rooms, clinics, and offices to support the Fossil Fuel Non-Proliferation Treaty for the sake of people and the planet, alongside a growing chorus of heads of government, Nobel laureates, leading academics, and civil society,” said FFNPT Global Engagement Director Harjeet Singh. “It’s time for world leaders to meet the bar for climate leadership by working together to end the fossil fuel era in a way that is fair and fast.”