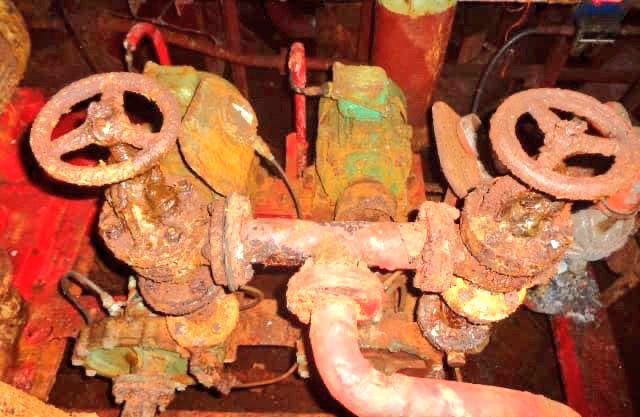 The salvage of the FSO Safer and its 1.1 million barrels of oil floating on the Red Sea will take place during the most dangerous time of year, after countries and private companies dragged their feet on a United Nations effort to fund the operation.

A salvage company has been hired to get the work done, and Canada stepped up last week with C$2.5 million (US$1.9 million) for the FSO Safer salvage fund after sustained pressure from climate campaigners. But “the latest donation means the UN is still some $14 million shy of its $80-million target required to avert a catastrophe experts have warned would be five times worse than the Exxon Valdez disaster in 1989,” Splash247.com reports.

“Yes, we feel that way. Yes we feel that frustrated,” said UN communications advisor Russell Geekie, when asked whether potential funders were engaged in a game of Chicken to see who would free up the funds first.

“it’s not just a question of wanting someone else to pay for it. It’s really hard within their structures, the way their budget lines are, to have funds set aside for this,” he explained—not until the ship breaks up or explodes, triggering an ecological and humanitarian disaster that would make the Safer a more immediate priority for international funders.

“Some have really struggled with it, and eventually they’ve come up with the funds, but it’s taken them a very long time,” Geekie added. And with no clear picture of when the actual money will come through, “it’s a systematic problem that we need to deal with. Because if the ship breaks up, it will cost tens of billions of dollars and lives and livelihoods, not to mention the decimation of reefs and mangroves and fishing stocks which will take decades to replenish.”

Alongside Geekie’s measured remarks, the UN has been snarking at potential funders on its @TheRealFSOSafer Twitter account.

“Hey Red Sea investors! Think some of that Red Sea investment could have been invested in… the actual Red Sea?” the account asked Friday, after the Red Sea Development Company triumphantly announced a joint venture worth 1.5 billion Saudi Riyals, or about US$400 million. “I’m somewhat of a threat to it, if you must know.” The tweet tagged RSDC CEO @JohnPagano.

“It could be worse,” the Twitter account added Saturday. “The entire news cycle could be about how all the richest nations on Earth neglected me until I leak a million barrels into the Red Sea on Yemen’s coast as the country faces the world’s worst humanitarian crisis?”

The cost of losing the Safer has been estimated at $20 billion. Yet potential donor nations have been so slow to respond that the UN office in Sana’a, Yemen resorted to a crowdfunding campaign in June, hoping to remove a “floating time bomb” from the sea before a season of higher winds and currents began in October.

“That’s when the peak probability of a breakup takes place,” David Gressly, the UN’s humanitarian coordinator for Yemen, told The Energy Mix in July. “That’s why we’re pushing to get the funding now, so we don’t get into that period one more time.”

“The one certainty we have is that if we don’t act, it will fall apart,” Gressly added. “This isn’t a question of a contingency. It’s only a question of when. It’s already been seven years without any maintenance, except for a small crew that lives on the vessel. They’re the ones keeping this thing afloat, doing all the emergency repairs they can, without the equipment or the skills to do major repairs. They’re doing what they can to keep the engine room clear of water so it doesn’t capsize. They’re taking the risk while the rest of us try to find the money to stop it.”

Another observer familiar with the ship and its condition said the six-member crew was holding the ship together “with band-aids and gaffer tape”.

In early September, Geekie said a salvage company would be able to start work during the period of heavier weather between October and December. Then on September 10, on its @MakeSaferBetter Twitter account, the UN reported that Houston-based Smit Salvage has been engaged to handle the operation.

“With sea conditions looking to worsen, the #FSOSafer rescue will get trickier, but at least Smit Salvage, the best in the business, will be there,” the UN said, in a separate tweet that amplified a BBC story on how complex salvage operations are handled.

But a week earlier, Geekie said there were still uncertainties around the timing of the salvage due to remaining gaps in the funding appeal, delays in turning pledges into money in the bank, and the time it will take to acquire and refit a separate tanker in the Very Large Crude Carrier (VLCC) class that can take the oil off the Safer.

“We need donors to disburse their pledges,” he told The Mix. “We need those pledges turned into cash.”

One of those pledges has finally come in from the Canadian government, after officials initially said they had no plans to help fund the salvage operation.

“Canada is supporting UN-led efforts to prevent a catastrophic spill,” International Development Minister Harjit Sajjan said last week. “The potential consequences would be devastating not only environmentally, but would also destroy livelihoods and force closures of ports Hodeidah and Saleef in Yemen, which support the delivery of critical humanitarian assistance including shelter, food, water, and health care.”

That was after Canadian climate hawks got wind of the crisis and began prodding the government for action, with Dawn Moorhead of the Greater Victoria Climate Hub organizing a sign-on aimed at federal MPs.. “A floating oil tanker is at risk of causing a $20B environmental disaster in the Red Sea,” tweeted ClimateFast co-chair Lyn Adamson. “The UN is calling for funds. Canada needs to donate to the cause!”

But Toronto-area blogger Len Rosen says the Safer is just one symptom of a much bigger problem.

The Dangers of Floating Storage

“Storing oil in decommissioned tankers has been an ongoing industry practice,” he writes. The practice “is ongoing and a danger to the environment, with tens of millions of barrels of oil sitting on ships with skeleton crews or none at all for long periods of time. There are times when as much as 100 million barrels of oil are afloat and going nowhere,” and “each vessel is a potential environmental threat.”

Rosen cites University of Houston finance professor Craig Pirrong, who described floating storage as “one of the easiest way to make money” and a “countercyclical source of profit” for big fossil companies and oil traders, enabling them to buy and store oil while prices are low and sell it when they’re high. Between the dire safety issues around floating storage and the “ongoing profiteering,” Rosen declares, “the practice should be outlawed”.

Rosen also points to some of the unique complexities surrounding the FSO Safer.

“Flying under the Yemen flag means that the country bears responsibility for the ship, its cargo, crew, and the waters around it,” he explains. “But in this case, the registration is called a flag of convenience for the owners of the ship and its cargo because Yemen’s ability to oversee the vessel is virtually non-existent. With the country in the midst of a prolonged civil war, an extreme drought, a pandemic, and profound food insecurity for its population, with thousands dying from disease and starvation, Yemen, today, is a failed state.”

But “the oceans of the world know no borders,” Rosen writes, in a post that appeared a couple of weeks before the federal funding announcement. “If the Safer were anchored 16 kilometres off English Bay and the Vancouver harbour on Canada’s West Coast, or in mid-Lake Ontario within sight of the City of Toronto skyline, would the government hesitate to act?”

Solar Saves EU €29B in Summer Gas Costs, Set to Surge in Asia