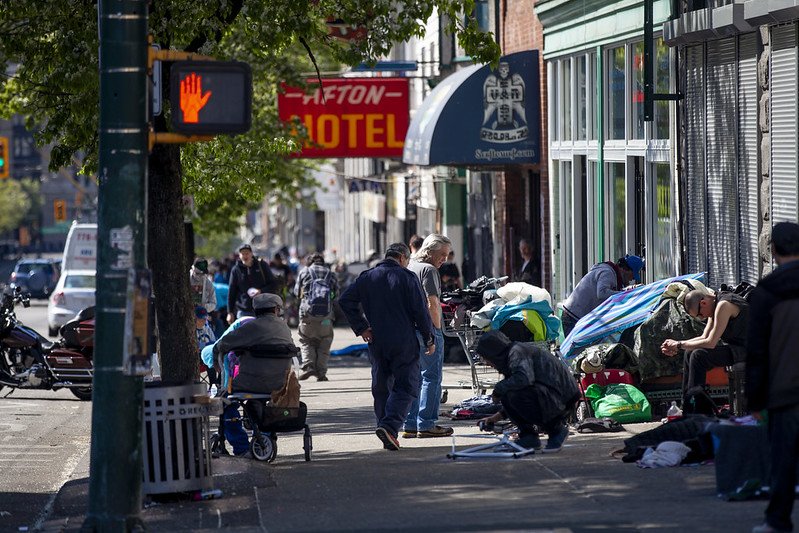 Four years after Vancouver pledged to double street tree density in the Downtown Eastside by 2030, lethal summer temperatures and high rates of mental illness among residents show how necessary and challenging it will be to keep its promise.

With street temperatures in the high 40s becoming increasingly common in the summer months, the immediate shade and general cooling effect that trees provide are urgently needed in the Downtown Eastside, which is one of Vancouver’s poorest neighbourhoods, reports CBC News.

“It seems like summers are just going to be boiling hellscapes now and for the foreseeable future,” Garth Mullins, a member of the Vancouver Area Network of Drug Users (VANDU), told CBC. Recalling last summer’s lethal heat dome, he added: “It’s a climate emergency. We have to act like it,” and “you have to give people trees.”

Vancouver listed the need to “mitigate and adapt to climate change” and to “distribute ecosystem services equitably” as two of the 12 governing principles in its 2018 Urban Forestry Strategy.

And the report’s urban heat island map points to the Downtown Eastside as not only Vancouver’s poorest neighborhood, but also one of its hottest, CBC says. In 2018, the area was recording summer street surface temperatures as high as 49°C, “while wealthier neighbourhoods, with more parks and trees, manag[ed] to stay cooler.”

A spokesperson told CBC the city is implementing an intensive tree planting strategy in the neighbourhood, with a particular focus on selecting heat tolerant species and planting where the trees are most likely to survive the frequently harsh urban environment.

Progress has not been easy. Officials told said the Downtown Eastside is proving a “challenging environment, both in that it is a heavily urbanized area and with challenges [from] some members of the public.”

Pointing to the mental health issues that plague the neighbourhood, a statement from the city pointed to videos posted online that showed people attacking newly-planted trees for no obvious reason. “It can take only a few seconds to undo years of progress.”