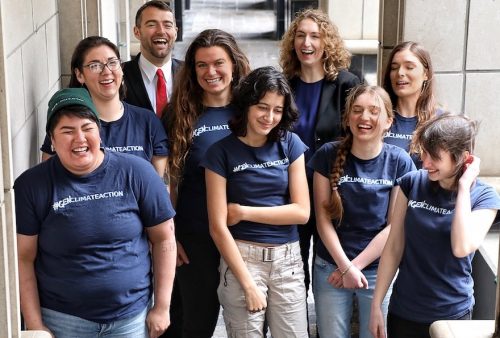 Fraser Thomson is a lawyer with Ecojustice. Alex Neufeldt is an entrepreneur in Ottawa, and Shelby Gagnon is an artist and food security worker originally from the Aroland First Nation northeast of Geraldton, Ontario. They’re two of the seven youth plaintiffs in Mathur et. al. v. Ontario, a Charter challenge scheduled for a court hearing beginning September 12.

The Energy Mix: We’ve seen several climate justice cases in Canada rejected by the courts before they could be heard. Yours is the first one to advance to a hearing. What makes it different?

Thomson: This case is obviously historic. It’s the first climate lawsuit based on Charter-protected rights to reach a full hearing in any Canadian court. In 2020, when the Ontario Superior Court dismissed the province’s attempts to stop this case, it made a landmark ruling that fundamental rights protected under the Charter of Rights and Freedoms can be threatened by climate change, and citizens have the ability to challenge a Canadian government’s contributions to the climate crisis under the highest law of the land. So for the first time in Canadian legal history, a government’s climate record will be put on trial. That’s a pivotal moment in the fight for justice.

In the past, the Charter has been fundamental in securing rights to same-sex marriage, abortion, and numerous other rights. We know that the climate crisis will be one of the greatest threats of the 21st century, and our clients’ case is the first time a court will determine whether Charter-protected rights are violated by that threat.

The Mix: You’ve based the case on a single government action, rather than a broad policy. What difference do you see that making?

Thomson: Our position is that the Ontario government’s and Premier Doug Ford’s weakening of Ontario’s 2030 climate target violates the Charter rights to life, security of person, and equality. At a time when the science says we should be doing more, showing greater climate ambition, the government has thrown climate action in this province into reverse. Our case targets that specific action that puts our collective future at risk. Our case is based on numerous experts who have provided evidence setting out exactly what the impacts of the Ontario government’s target will be, and how the climate emergency will be experienced in Ontario. There is overwhelming evidence in this case that climate change is one of the most, if not the most, severe threat to our fundamental rights in this province in the 21st century.

The Mix: What makes this a Charter case?

Thomson: For more than 30 years, elected politicians have ignored the warnings on climate change. They’ve continued to worsen this crisis with little regard for our collective future and the that of future generations. It is now abundantly clear that climate change poses significant threats to our most fundamental rights, the very rights that the Charter is designed to protect.

The Charter is part of our constitution, which means it sets rules that all governments must follow. When governments engage in conduct that violates the Charter, it is the job of the courts to step in and safeguard citizens from these violations.

No Canadian court has ever looked at all the evidence and determined whether a government’s actions in furthering the climate crisis constitutes a violation of the Charter. That’s what makes my clients’ case so unique. For the first time, citizens are asking the courts to consider the overwhelming scientific evidence on climate change and determine whether it constitutes a violation of Charter rights. Essentially, whether the government’s actions violate the very rules that govern the nation. If the Court agrees with my clients, and the overwhelming scientific evidence, it can step in and order the government to stop violating these rights.

The Mix: If a court ruled against you, what would it say about the value and impact of the Charter itself, and how would it affect Canadians’ confidence that the country is grounded in a shared understanding of rights and freedoms?

Thomson: The overwhelming evidence of the harms posed by climate change will be before a court. No lower court in Canada has ruled in favour of a case like this in the past, but the Charter is supposed to grow and adapt in response to these kinds of harms, particularly when there is unimpeded evidence that the nature of these harms will be severe, widespread, and existential. So we’re confident that our case has a good chance of succeeding, and we believe a victory would mean real progress in the fight for a safe future.

The Mix: When you say ‘unimpeded’, what does that mean?

Thomson: We’ve provided a number of affidavits in this court case. Some of those experts were questioned by the Ontario government, but their evidence that the climate crisis will cause widespread harms will be before the court. The response of the Ontario government has really been to downplay and in some cases deny the severity of the climate crisis and its own role in causing these devastating impacts.

The Mix: Alex Neufeldt and Shelby Gagnon, why did you each get involved with this case?

Neufeldt: Climate change is obviously an existential threat, and I don’t want to die an untimely death due to climate change or suffer any ill effects. And it would be nice to live in a place where the people in charge are leaders who are taking us in the right direction through the transition to green jobs, a green economy, a low-carbon economy. There’s potential to have a lot of impacts for people, not just in a climate sense, but in terms of more prosperity for everyone. The government of Ontario has taken us in the wrong direction, and I’d like to see them do better.

Gagnon: As an Indigenous woman, I’m looking at how to protect the land and the spirits and the other beings that live on this land and this Earth. I felt a pull to be a part of this case to speak and advocate for the things that can’t physically speak, to protect my community and the future generations that will be affected by climate change. I said yes to this case right away out of a responsibility to advocate for stricter policies within this system we live in, even though that system was never meant for me.

I work in food security, and in the three years since this case began, there’ve already been changes in harvesting times. Last year there were no blueberries, and we’re berry people, so for me and my community there’s a loss of identity when we see these foods, plants, and even animals being lost, just disappearing. It’s a scary thing, it creates a sense of urgency to be in this, and I’m happy that we’re going to a hearing now. I know it takes time and a lot of kicking to shift these colonial, racist policies, so I’m hoping we’ll see a change in the power the government has, and the power that people and communities have when we come together.

Neufeldt: Some of the practical examples are banal compared to species loss and loss of traditional foods, but they’re impacts that some people will resonate with. In Ottawa, which is unceded, unsurrendered Algonquin Anishnaabe territory, there’ve been a number of tornadoes and floods, and aside from being really scary, they’ve affected my dress rental business. People have cancelled appointments because the power was out and they had more important things to worry about. Or they’ve returned dresses late because they got completely flooded. I’m not going to pretend this is some earth-shattering thing, but I can see a future impact on any kind of business that sells non-essential goods and services that are the backbone of the economy. It’s only going to get worse as these extreme weather events get more severe and frequent.

Neufeldt: A win would be a legal precedent that climate change falls within the scope of the Charter, and that governments have a legal responsibility to protect us from the impacts of climate change. But further than that, our case is about an emissions reduction target which was pretty decent before the Ford administration came to power and rolled it back to one that is completely inadequate. So if the judge said to throw out this target and replace it with something more ambitious, I’m not sure how likely that is, but it would be a powerful win.

Gagnon: The other win is the sense of how individuals and communities and even young people have the power to speak and have our voices heard through this colonial and racist legal system. Even for me, coming from Northern Ontario, there’s a way to speak my truth and advocate for something greater than just myself. It’s showing this communal power, that anybody could do this.

It really helps that we’re doing this together and supporting each other. We all have our journeys and paths we’ve been on that led us into this case; we’re all in our own realms or careers or life journeys. So there’s a win on the legal side, but also just a win for people.

The Mix: Is this the sound of hope in the face of the climate emergency?

Gagnon: There’s so much that hurts in this world, but as an Indigenous person in this colonial system I do see so many beautiful humans and beautiful spirits in my life. I do see this building up of hope and light with different people and communities. As Anishnaabe, there’s this teaching that you constantly seek—so I’d like to say that I’m an optimist. I need to have hope to do this work. So I balance doing this kind of scary work with what fulfills me, by giving energy to my community and doing what connects me with such a beautiful land.

Neufeldt: Being a part of this case has had a really positive impact on my life because action breeds hope. Inaction breeds despair. I find I have less climate anxiety now than I used to. The problem is getting worse, and yet I’ve felt more hope and more optimism [by doing something about it]. I hope our case inspires other young people around the world to step into their power.