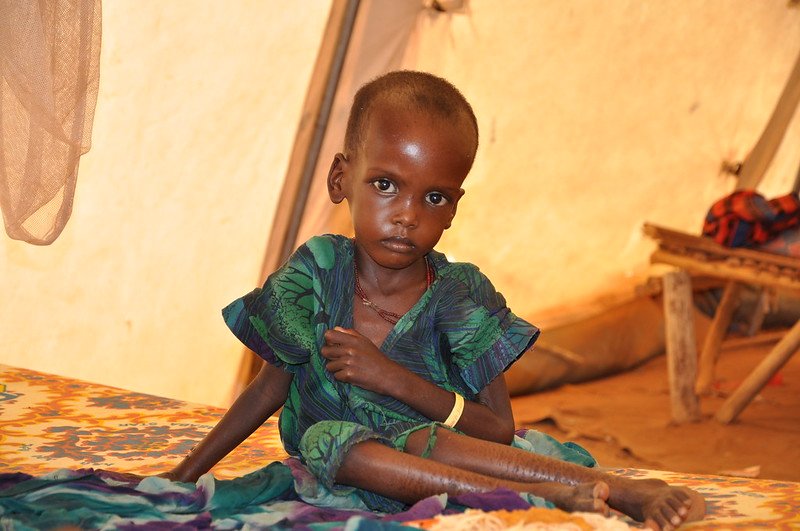 As the fallout from civil war, the coronavirus, and the ecological chaos generated by global heating continue to hammer the Tigray region of Ethiopia, a World Food Programme assessment finds 29% of very young children in the region suffering from acute malnutrition.

“Nearly one in three children under five in Tigray are malnourished and the UN said urgent action is needed to prevent them from dying,” reports the Guardian, citing the emergency assessment. The assessment says more than half of pregnant and breastfeeding Tigrayan woman suffer from malnutrition.

In one area of Tigray, 65% of children under five are dangerously malnourished. The report calls for “urgent action” on the part of the international community, noting that a malnourished child is 12 times more likely to die than her well-nourished peers.

While available mortality data does not yet warrant a famine declaration, Claire Nevill, a WFP communications officer in Ethiopia, said the organization’s funding to treat malnutrition in the region was “fast running out.” Things would likely get worse as UN funds are already stretched very thin, in part due to Russia’s war in Ukraine, she added.

Rising levels of acute food insecurity in Tigray owe in part to the fallout from nearly two years of civil war between the Tigray People’s Liberation Front (TPLF) and Ethiopia’s government led by Prime Minister Abiy Ahmed. That conflict has displaced more than two million people from their homes and livelihoods, says the International Rescue Committee (IRC).

While an “uneasy truce” is holding, “the region is still facing restrictions on basic services such as communications and banking, the latter meaning that people do not have easy access to cash,” writes the Guardian.

Supply chains with the rest of Ethiopia that were broken by the conflict remain disrupted, leading to “skyrocketing” prices for staples like sorghum and teff.

The economic aftershocks of the pandemic—in a country where only 1.2% of the population are fully vaccinated, according to the IRC—are also implicated in rising food insecurity in Tigray.

And then there are the impacts of the climate crisis. In a January 2021 report, Oxfam warned that “even before the conflict, people had lost up to half their crops due to climate-fuelled plagues of locusts.” Oxfam added that “the conflict erupted in the middle of the harvest season, halting attempts to gather the remains of already depleted crops.”

Drought has also played a part in the ongoing suffering. According to an August 5 report from the United Nations Office for Coordinated Human Affairs (UNOCHA), “Ethiopia is experiencing one of the most severe droughtsin the last 40 years following four consecutive failed rainy seasons since late 2020, pushing an increasing number of people into an alarming life-threatening situation.”

Most forecasts “project that the October to December season will also be below average, setting the stage for an unprecedented fifth failed rainy season,” the UNOCHA adds. “This new climatic shock has further compromised already fragile livelihoods heavily reliant on livestock—most of which has died—and deepening food insecurity and malnutrition.”

Nearly 17 million people are currently “targeted for assistance across the drought-affected areas for the second half of the year, a rise from 8.1 million people targeted in the first half of the year,” UNOCHA says. Best estimates are that “more than 3.5 million livestock have died, while at least 25 million are at risk and are very weak and emaciated with no or little milk production, the main source of nutrition for children.”