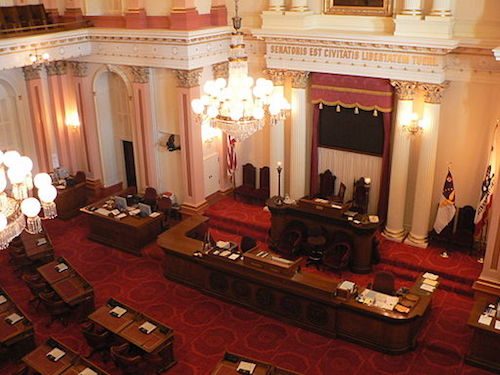 A 90% clean power target by 2035, $54 billion in new spending on clean energy and drought resilience, quicker approvals for power grid upgrades and clean energy projects, and a long-awaited phaseout for oil and gas wells near homes and schools are highlights of a climate package adopted last week by the California state assembly.

And they put a foundation under a plan, first proposed by then-governor Jerry Brown in 2018, to bring the entire state economy to carbon neutrality by 2045. “This is a pretty extreme ask—but it’s an extreme ask to deal with extreme circumstances,” said State Senator Bob Hertzberg (D).

“The $54 billion, intended to be spent over five years, contains around $6 billion for electric vehicles and more than $8 billion to decarbonize the state’s electrical grid—which is still heavily reliant on natural gas,” the Cable News Network reports. “It also includes close to $15 billion to improve public transit, and over $5 billion for climate and drought resilience programs.”

The decision to prohibit new oil and gas wells within 3,200 feet/975 metres of homes, schools, nursing homes, and other “sensitive receptors” capped a decades-long fight to “end neighbourhood oil drilling in California,” Grist reports. The state has 240,000 wells, and “the 2.7 million Californians who live within a half-mile of the wells are at higher risk of cancer, asthma, heart disease, and adverse reproductive issues.”

A joint investigation last year by Grist and Capital & Main “showed that Black, Latino, low-income, and medically underserved communities are disproportionately located near these wells in the state,” Grist writes.

Sen. Lena Gonzalez (D-Long Beach) led the fight against neighbourhood drilling in a district known as “asthma alley”, along with Sen. Monique Limón (D-Long Beach). Gonzalez called the legislation “a historic step for the front-line communities that have fought for decades for basic health protections from the disastrous ailments of neighbouring oil wells,” Inside Climate News reports.

“Oil and gas companies should not be able to drill next to day cares in California. It’s just that simple,” University of California, Santa Barbara political scientist Leah Stokes told Inside Climate.

“With this bill, the government listened to community concerns and applied the setback to new wells and to the rework of wells,” said Natural Resources Defense Council lawyer Ann Alexander.

“The setback bill was our priority,” said Raquel Mason, policy manager at the California Environmental Justice Alliance. “It’s not often in my time doing this work that we get to go back to our community members with a full win.”

The legislative package “comes as California and other Western states are in the grip of an intense heat wave amid a devastating, 22-year drought. And it follows state air regulators’ vote to phase out new gas-powered car sales in the state by 2035,” CNN says.

“The package’s passage is a major victory for Gov. Gavin Newsom, who advocated strongly for new climate measures at the start of the state’s legislative session.”

“Our state is facing the most extreme temperatures we’ve experienced this year, putting our communities, especially our most vulnerable neighbours, at risk,” she said in a statement. “We’re also continuing to deal with an historic drought and the ongoing threat of wildfires.”

The state’s climate and environmental community praised the legislation.

“As California combats dangerous heat waves and the high energy costs that come with them, the need to modernize our electricity system has never been clearer,” said Emilie Olson, policy principal at the Advanced Energy Economy industry group. “This year’s budget deal invests in short- and long-term solutions to California’s energy challenges, like programs that save households money and quickly reduce stress to the power grid on our hottest days.”

“We applaud our lawmakers for accelerating our path to 100% clean electricity, protecting communities from pollution from oil drilling, and making a major investment in clean cars, trucks, and buses,” added Laura Deehan, state director of Environment California.

The groups split on whether it’s a good idea to keep Diablo Canyon open for another five years. Clean Air Task Force President Armond Cohen called that decision “a win for climate action, a win for California, and a win for the broader effort to reckon with the realities of decarbonization and grid resilience.” Friends of the Earth President Erich Pica countered that keeping the plant open beyond its previous 2025 closure date “exposes the surrounding communities and environment to serious risk while costing taxpayers and ratepayers potentially billions of dollars.”

The Diablo Canyon vote came just after Newsom issued an emergency proclamation that urged homes and businesses to conserve electricity and temporarily eased restrictions on gas-fired power plants, in what Bloomberg news called the grid’s biggest test since rolling outages hit the state in the summer of 2020.

The emergency order said the California Independent System Operator (CAISO) was projecting evening electricity shortages of up to three gigawatts over the Labour Day weekend, Bloomberg writes. That was after the worst dry spell in 1,200 years “gripped nearly every inch of California with drought this summer, leaving rivers and reservoirs perilously low.”

The legislation also “sets down guardrails for developing technologies that capture carbon dioxide from the smokestacks of industrial facilities, as well as direct air capture plants that would suck carbon from the atmosphere,” Grist writes. It mandates the powerful California Air Resources Board (CARB) to “develop monitoring and reporting systems to ensure that these kinds of projects are actually reducing emissions, and create a public database for tracking their deployment.”

It also bans Enhanced Oil Recovery, a process by which the lion’s share of the carbon dioxide captured to date by different technological means is reinjected into declining oil wells to increase their output.

And it calls for new state targets for natural carbon sequestration on natural and working lands, like forests and wetlands, Grist says.