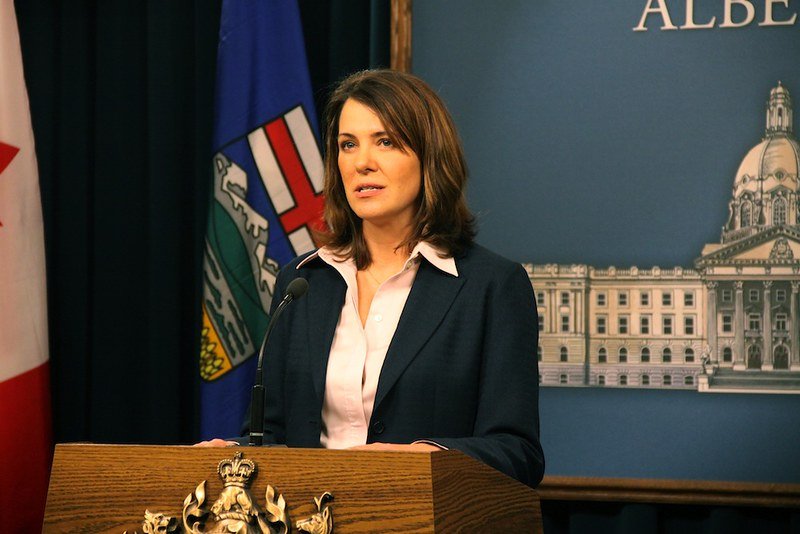 United Conservative Party leadership hopeful Danielle Smith in Alberta is being accused of sowing misinformation with her unsubstantiated claim that the Trudeau government plans to hire “climate cops” to enforce federal decarbonization policy.

On a Saturday in late August, Smith issue a tweet claiming that Ottawa planned to hire “climate change enforcement officers”. It touted her controversial proposal for an Alberta Sovereignty Act—later attacked by departing premier Jason Kenney as a “cockamamie” plan—as the antidote. The conspiracy-laden tweet listed “Greta, WEF [the World Economic Forum], & [federal Environment Minister Steven] Guilbeault” as ideal candidates for the job and claimed handcuffs, baton, and weapons as job perks.

The tweet had picked up 579 retweets and 1,895 likes as of Monday afternoon, September 5.

Smith’s only problem was that that’s not what the job ad says.

“They have the authority to issue enforcement actions. In order to work as officers, in addition to their other education/training, they complete 16 weeks of standardized enforcement training and ongoing training to maintain the certifications and skills required for their designations,” the department said.

Four days later, ECCC issued a nine-part Twitter thread to counter Smith’s fake news. “We are aware of some misleading reports on social media suggesting that we are creating a new enforcement function,” the first tweet in the series declared. “This is false and the record needs to be set straight.”

The series of tweets traced the department’s enforcement function back to 2008—a year when then-Alberta MP Stephen Harper was prime minister—and stressed that the new staff to be hired “are not climate change enforcement officers”. It lists the handful of federal laws that authorize the positions and explained that the department is simply hiring new officers to maintain its existing work force.

“Our enforcement officers are professional, dedicated, and highly-trained, and we are proud of the work they do each day to protect Canada’s environment, wildlife, and habitats,” ECCC said.

The first tweet in the series had received 2,354 retweets and 5,082 likes as of yesterday.

CBC says an article late last month in The Counter Signal, described by the national broadcaster as a “far-right publication”, includes a floor plan for a new ECCC office that it claims includes an armoury, interrogation rooms, biological labs, and “controlled quiet” room, allegedly reflecting Ottawa’s “future plans for climate enforcement”. One of the ECCC tweets said the floor plans for its new offices in Winnipeg “are real, but the way the facility is being described is completely false”.

The winner of the UCP leadership campaign will immediately become Alberta’s next premier.