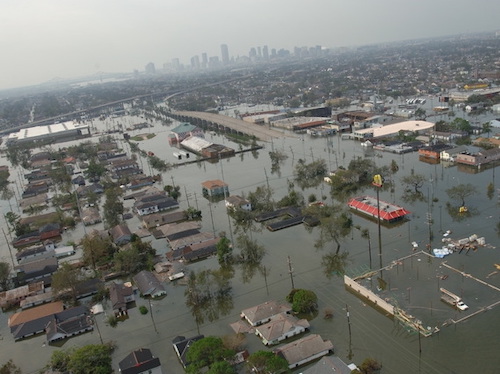 Edward Buckles, Jr. was 13 when Hurricane Katrina hit New Orleans and completely upended his life. Now he’s produced a film to catch up with other “Katrina Babies” who went through the same trauma.

In the aftermath of the storm, Buckles and his family moved from New Orleans to Lafayette, Louisiana for several months while their hometown began to recover from the catastrophic storm. He told The Associated Press he doesn’t remember much from those months living in Lafayette, grasping for a sense of normalcy in the aftermath of one of the most destructive hurricanes in American history.

His community was experiencing so much destruction. Now as an adult, he views that blank spot in his memory as a response to the trauma of what he witnessed.

Buckles’ parents asked him at the time if he was okay, but he wasn’t quite able to figure that out for himself in the moment. Later the trauma resurfaced. With kids, he said, “what’s responsible and what’s important is that you set them up to deal with that trauma once it surfaces.”

But the filmmaker said in his new documentary “Katrina Babies” that not all the children who were traumatized by living through the hurricane and its aftermath had adults checking in on them. So that’s what he set out to do, capturing several New Orleans residents as they reconcile with a childhood marred by Hurricane Katrina.

The documentary, which has garnered critical praise, became available for streaming on HBO Max on August 24 and debuted on HBO the same day, 17 years and a day after the hurricane formed in the Atlantic Ocean.

It shows how New Orleans and its people were changed by the storm, AP says. It depicts the childhood trauma it caused for a generation coming of age after one of the United States’ first major climate-related disasters. New Orleanians featured in the documentary share stories of seeing dead people and pets, of leaving home and returning to communities destroyed, while they were still children.

The film looks at the climate past and present and, the makers of the film hope, sounds alarm bells for the climate future.

“I hope this is a local and American story that will motivate people to want to do better and care about human beings, and about how intrinsically linked we are with nature and that the future is clear: There is going to be more of this,” said Audrey Rosenberg, lead producer of the film.

Buckles said that while Hurricane Katrina might has been a formative experience for him and the youth of New Orleans at the time, more waters have come through since. Though he isn’t a climate scientist, he knows first hand the repeated damage wrought on his hometown by hurricanes and tropical storms made more intense by climate change.

“My grandmother lost her home due to flooding from Hurricane Katrina,” he said. “She has been flooded seven more times just from tropical storms.”

Cierra Chenier, 26, was featured in the documentary and also knows people who have had to rebuild multiple times since Hurricane Katrina due to subsequent hurricanes and storms.

She said the loss of culture and history in New Orleans due to repeated climate-related disasters like Hurricane Katrina shaped her decision to become a local historian and writer.

“I got into wanting to preserve our history because of how quickly I felt my childhood became history,” she said. Even though the storm was 17 years ago, she said, it continues to shape the present.

“In preserving our stories, writing about those stories and narrating those stories, it’s always connected to the present and we can form better solutions for the future,” she said.

Chenier, Buckles, and the rest of the youth affected by Hurricane Katrina have a lot to say about how the future, based on their experiences of years of inaction from government agencies to limit climate change, and prepare and recover from climate disasters. Year after year, New Orleanians and the state and federal government know that hurricane season is going to come and be potentially catastrophic because of climate change, Buckles said.

And still, he said, Hurricane Ida, which hit New Orleans 16 years to the day after Hurricane Katrina, affected people in his community in eerily similar ways to the 2005 storm. The relief measures, he said, were nearly as slow.

People in his community have become more resilient as a result, he said. But he wonders whether government agencies are relying on those harmed by climate-related disasters to help themselves when what they really need is public planning and preparation.

“The youth are tired of dealing with this, myself included,” he said. “And we cannot forget to hold accountable those who need to be held accountable.”

This Associated Press story was republished by The Canadian Press on August 23, 2022.