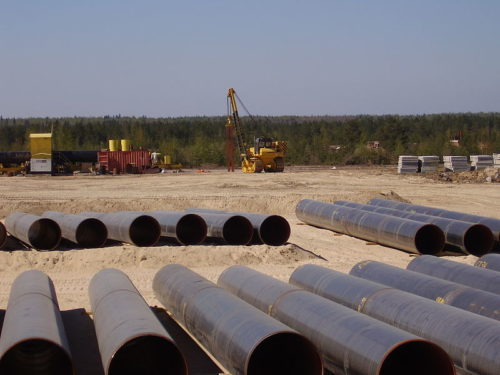 Still, the joy of a long-awaited, US$369 billion investment in taming global warming is tempered by lingering caution about the repercussions of a murky side bargain purported to streamline oil and gas projects, Energy News Network reports.

In some Virginia circles, activists worry that the last-minute agreement to rescue a climate victory in the U.S. Senate amounts to a burdensome yoke for Appalachian communities united for years in fending off the $6.6-billion Mountain Valley natural gas pipeline.

Bill Muth, an organizer with Third Act Virginia, said he is thrilled by the “good parts” of the new law that are expected to reduce carbon emissions by 40% over the next eight years.

“I loathe the side deal,” the Richmond resident said about negotiations between Democratic Sen. Joe Manchin of West Virginia and Senate Majority Leader Chuck Schumer of New York. “Third Act Virginia stands solidly with the front-line communities in Appalachia.”

The organization is a relatively new chapter of Third Act, a national climate justice organization Bill McKibben launched last September so “experienced Americans” age 60 and up could commit what the late Georgia Congressman John Lewis of Georgia classified as “good trouble.”

“If anything,” Muth continued, “the IRA clarifies that the climate crisis is a climate justice emergency.”

While few are privy to the specifics of what was promised to Manchin, one reported provision that rankled advocates was an agreement to complete the now-on-hold Mountain Valley Pipeline, which would transport hydraulically fracked gas from wells in Manchin’s home state. It could even restrict which courts are allowed to rule on pipeline challenges.

“Until those details were revealed, the MVP was on life support,” Muth said. “With the side deal, it seems all the pieces of significant resistance to the pipeline have fallen like dominoes.”

He’s referring to other measures in the deal that potentially open the door for Congress to upend the bedrock environmental laws and curtail citizen challenges to fossil fuel projects. For example, that could lead to reforms such as accelerating Clean Water Act certifications and capping at two years the permitting timelines for major energy projects.

“It’s even more chilling if Manchin can impose his will on the Federal Energy Regulatory Commission (FERC) and other regulators,” Muth said. “That potential to gut environmental protection laws and take the legitimacy out of regulatory processes is one reason I’m committed to seeing that MVP doesn’t see the light of day.”

In June, he led dozens of protesters on a march from the James River to the downtown Richmond headquarters of Wells Fargo Bank. The bank is the No. 1 funder of the pipeline’s construction partners.

“If regulatory and judicial is compromised even further, you can expect some Third Acters to be doing more direct actions on the MVP,” he said. “Decisions in Congress that have nothing to do with the front-line people on this pipeline route keep me grounded and assured that the right stand is to make sure it never gets built.”

The Mountain Valley Pipeline is two projects in three states, veteran energy and environment reporter Elizabeth McGowan explains in her Energy News Network post. The mainline would be 303 miles between West Virginia and southern Virginia. The 72-mile Southgate extension would reach into North Carolina to a market that close observers say is non-existent.

The limited liability company trying to complete it is a joint venture of EQM Midstream Partners, NextEra Capital Holdings, Con Edison Transmission, WGL Midstream, and RGC Midstream, according to the pipeline website.

Currently, it’s way over budget, years behind schedule, and saddled with millions of dollars in penalties for water quality violations.

Roanoke resident Freeda Cathcart, a climate and environmental leader with Mothers Out Front, has monitored pipeline activities since 2019.

She maintains that construction of the Mountain Valley is not as far along as the 94% owners are claiming. “With an estimated 20 linear miles of pipe remaining,” the pipeline website states, “MVP’s total project work is nearly 94% complete, which includes 55.8% of the right-of-way fully restored.”

“What’s frustrating is that the fossil fuel industry is making it sound as if regulations are the problem,” she said. “But it’s the federal agencies that are the problem because they’re not providing adequate insight on these giant projects. Congress needs to fully fund those agencies so they can do their jobs.”

Cathcart pointed to lengths of pipeline that are consistently left exposed, in piles along the route. Exposure to the elements for more than a year compromises materials, causing safety risks.

One analysis had the Inflation Reduction Act preventing 24 tonnes of carbon dioxide or equivalent emissions for every tonne it triggers.

But a completed Mountain Valley Pipeline is the part of the deal that could cancel some of those gains.

“Any project that accelerates extreme weather has to go,” Cathcart told Energy News Network. “It’s crazy to put up a kerosene stand next to a five-alarm fire. And that’s what MVP is doing.”

But instead of criticizing Manchin, Cathcart said the focus should shift to the pipeline project’s owners and others in the fossil fuel industry who perpetrate a false jobs-versus-environment narrative.

“The industry needs to come to grips with where we are,” she said. “There needs to be an orderly transition to clean energy.”

Still, Cathcart understands why the Manchin deal shook up those in front-line communities.

“They’ve been suffering this whole time and feel as if they’re in sacrifice zones,” she said. “They deserve to be heard.”

Manish Bapna, president of the Natural Resources Defense Council, said the Manchin deal elevates the need for Congress to pass the Environmental Justice for All Act.

“We won’t let the oil and gas industry marginalize communities,” Bapna said. “Low-income communities and communities of colour need an even greater voice at the table when proposed projects, like the Mountain Valley Pipeline, could harm their neighbourhoods, pollute their air and water supply, endanger wildlife, and accelerate the climate crisis.”

Protect Our Water, Heritage, Rights (POWHR) is a coalition of Virginians and West Virginians dedicated to protecting communities from harms caused by the Mountain Valley Pipeline and other fossil fuel infrastructure.

When the Manchin deal came to light, Grace Tuttle, programs coordinator for the coalition, said residents of Appalachia would refuse to be sacrificed for political gain or used as concessions.

Days prior, on July 29, the public comment period had closed on Mountain Valley’s request with the Federal Energy Regulatory Commission to extend a permit that would allow pipeline construction to continue for another four years—if the owners can find a way to overcome the court rulings and other decisions that have frozen it in place.

FERC granted the original certificate in 2017, then complied with MVP’s request for an initial extension in 2020. That two-year add-on expires this autumn. The regulator issued the four-year extension yesterday, Utility Dive writes.

Protect Our Water, Heritage, Rights was one among thousands of groups and individuals urging FERC commissioners to deny yet another extension, thus choking off “the climate nightmare known as the MVP.”

“Our grassroots movement and national allies are all hands on deck at this critical moment to stop the MVP,” Tuttle said. “There is overwhelming health, ecological, climate, and economic evidence that the MVP has no place in our communities, especially during a climate crisis.”