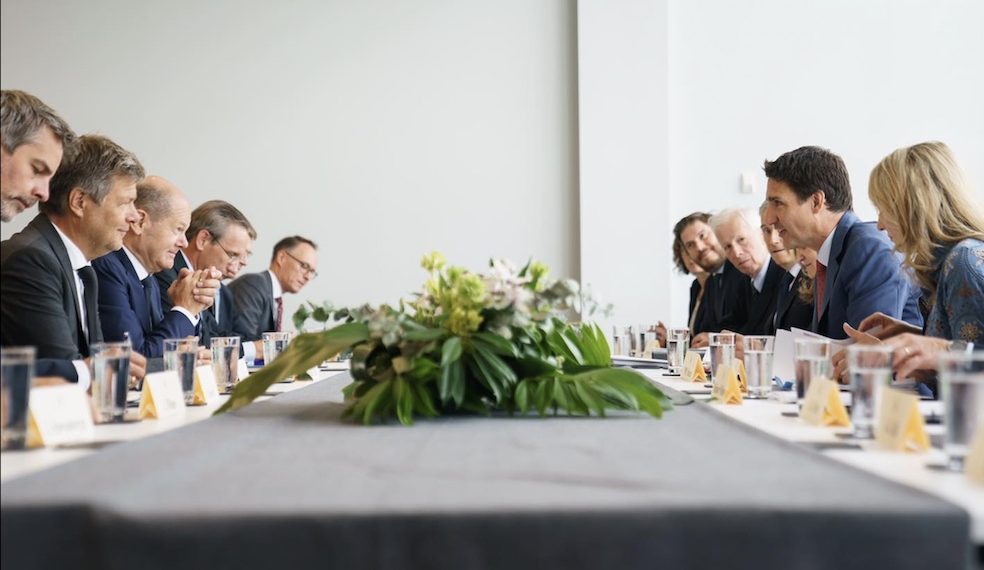 One observer said the two countries’ joint declaration of intent, which calls for green hydrogen shipments from Canada to Germany to begin in 2025, was likely the first global trade deal for renewable hydrogen or its more easily-transported derivative, green ammonia. In Stephenville, Trudeau called the bilateral commitment to build a trans-Atlantic hydrogen supply chain by 2030 a historic moment, CBC reports.

“We must look to resources like hydrogen which can and will be clean and renewable. We can be the reliable supplier of clean energy a net-zero world needs,” he said. “The need for clean energy is almost limitless, and that’s where Canada, and Atlantic Canada specifically, gets to step up. With our renewable resources, we have a huge advantage.”

“We believe that Atlantic Canada presents a huge opportunity for us, but also for Canada to contribute to a green energy transition,” Scholz said, adding that his country will be looking for 90 to 110 terawatt-hours of hydrogen by 2030. “Canada is a close and like-minded partner in the energy transition.”

The coverage of Scholz’ visit pointed to Russia’s invasion of Ukraine, and the intense energy supply crisis confronting Germany as a result, as the context for a faster shift to renewables. “”We cannot as a world continue to rely on authoritarian countries that will weaponize energy policy as Russia is, that don’t concern themselves with environmental outcomes, or labour rights or even human rights,” Trudeau said.

Yet “the joint declaration of intent makes clear the agreement is not legally binding and stipulates it will be up to Canada’s Minister of Natural Resources and Germany’s Ministry of Economic Affairs and Climate Action to keep track of whether it’s making progress on its goals,” the Globe and Mail writes. “The Canadian-German agreement sets no targets for volumes of hydrogen produced and contains no commitments of new money to help commence exports to Europe by 2025.”

Natural Resources Minister Jonathan Wilkinson said the volumes of product that Canada can export that quickly “are probably going to be modest,” acknowledging that the timeline is “very ambitious”. But that “reflects the fact that Germany sees how this can help them in their current context,” with an immediate need to break free of Russian fossil fuels as soon as possible.

“Part of this is being driven by the desire to displace Russian gas,” Wilkinson said.

But behind the bid for clarity and speed on the green hydrogen deal, Scholz’ visit featured a sequence of mixed messages on whether Canada and Germany see a future for liquefied natural gas exports from Canada’s East Coast.

Since the beginning of Russia’s war, Canadian fossils have been pushing hard to resurrect LNG export schemes that had already been rejected for economic or environmental reasons. Analysts and observers have been explaining for months that the projects wouldn’t go into production in time to address Germany’s immediate need, and the country’s commitment to rapid decarbonization would soon wipe out the demand that would justify a longer-term import/export deal.

As The Energy Mix reported last week, when the Canadian and German governments announced Scholz’ itinerary almost two weeks ago, neither the word “liquefied” nor the acronym “LNG” showed up in either official statement. Later news reports confirmed that LNG would not be on the agenda for the three days of deliberations.

But none of that stopped Trudeau and Scholz from confusing matters when discussions went live.

At a news conference in Montreal Monday, the two leaders “appeared to pour cold water on the idea of shipping Canadian natural gas to Europe,” with Trudeau pointing to the cost and complex logistics of shipping gas from Western Canada “to a still-unbuilt liquefaction terminal on the Atlantic coast,” CBC reports.

“One of the challenges around LNG is the amount of investment required to build infrastructure for that,” Trudeau said. “There has never been a strong business case because of the distance from the gas fields, because of the need to transport that gas over long distances before liquefaction.”

He said Canada’s “best” contribution to the global gas market would be to ship product to Asia (which brings its own set of serious challenges), or via pipeline to the United States, freeing up supplies that Germany could more easily acquire from other exporters.

While Canada would be willing to ease regulatory hurdles for LNG exports, “there needs to be a business case,” Trudeau added. “It needs to make sense for Germany to be receiving LNG directly from the East Coast. Those are discussions that are ongoing right now between our ministers, between various companies, to see if indeed it makes sense.”

Scholz agreed that any LNG deal would need a business case, “because if it’s too expensive, it will not fly.”

But Trudeau still held open the possibility that LNG bound for Germany might be “doable”, with Scholz adding that Germany “would really like Canada to export more” gas to Europe.

“As Germany is moving away from Russian energy at warp speed, Canada is our partner of choice,” he said, during a German-Canadian economic conference in Toronto. “For now, this means increasing our LNG imports. We hope that Canadian LNG will play a major role in this.”

“We are creating the atmosphere for very direct talks between the business sectors of Canada and Germany [to see] if there is something which could be done now in this very crisis,” the German chancellor told Power & Politics host Vassy Kapelos. “But this is part of the follow-up between the businesspeople of the two countries.”

In the fog of comments and counter-comments, it wasn’t immediately clear how seriously either leader was advocating for direct LNG trade between the two countries. “Asked if there had been developments making new Canadian LNG projects more likely since Monday, a government source with knowledge of the talks said there had been ‘no change’ and Scholz was ‘well aware of sort of the timeline that would be associated’ with new Canadian LNG,” Reuters wrote Tuesday.

At the same time, with winter approaching and its own supplies in doubt, Germany “is quite keen for gas from just about anywhere,” the Reuters source added.

“After months of discussions focussed on East Coast liquified natural gas (LNG), the visit results in a welcome shift in rhetoric and focus towards green hydrogen,” Climate Action Network-Canada said in a statement.

“At a moment when the Canadian fossil fuel industry has been intensifying its lobbying efforts and instrumentalizing the invasion of Ukraine to promote fossil fuel expansion, the Canada-Germany Hydrogen Alliance offers a glimpse of economic opportunity and job creation beyond oil and gas,” CAN-Rac added. “As Canada’s domestic ‘clean hydrogen’ strategy continues to blur the lines between renewable and fossil-based hydrogen, the Canadian government has the chance to learn from Germany’s clear categorization and focus on green hydrogen.”

“There’s something beautiful about wind power from Newfoundland and Nova Scotia blowing away petro-power in Europe,” added Greenpeace Canada Senior Energy Strategist Keith Stewart. “Fossil fuels are at the core of the current conflicts in Europe and around the world, whether they are paying for weapons or fueling climate disasters.  So it is great they’re signing a deal proving renewable energy is the way forward, even though they can’t quite bring themselves to shut the door completely on LNG just yet.”

But that opening still raised flags with some CAN-Rac member groups.

“While we are encouraged to see the new Canada-Germany agreement for production and export of green hydrogen, we are concerned that the door is being left open to blue hydrogen fuel,” said Keith Brooks, programs director at Environmental Defence Canada. “Blue hydrogen, produced from fossil fuels, is not a clean fuel, and in fact may contribute just as much greenhouse gas emissions as burning gas, or even more. The world needs truly clean, renewable energy sources now.”

“We welcome the race toward a zero-emissions economy,” said Louise Comeau, director of climate change and energy solutions at the Conservation Council of New Brunswick. “We need to run that race with fair rules of engagement for communities and companies,” and “liquefied natural gas is not a legitimate contestant in this race. It won’t cross the finishing line in time to help Germany or the planet.”