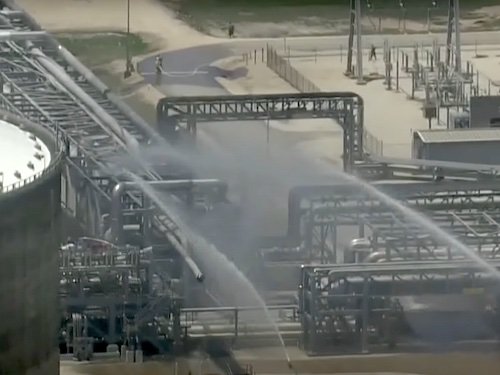 Freeport LNG has changed its tune on the cause of an explosion and fire at the company’s liquefied natural gas (LNG) export facility in Texas, according to three trading sources and a document shared with Reuters.

The sources told Reuters the company now blames human error for the explosion and fire in early June. No one was injured in the incident on Quintana Island, about 90 minutes south of Houston. Freeport is the second-biggest LNG exporter in the U.S., accounting for about 20% of the country’s total, and the closure cut the flow of gas to other countries by about 1.9 billion cubic feet per day, fossil newsletter BOE Report states.

Freeport LNG spokesperson Heather Browne would not comment on questions from The Energy Mix on the cause of the explosion.

“We are providing public statements on the incident as we have pertinent, substantive information to provide,” said Browne.

The U.S. Pipeline Hazardous Materials Safety Administration (PHMSA) issued a safety order to Freeport on June 30 requiring the company to report back on the root cause of the failure within 60 days.

The company surprised market analysts by retracting the force majeure it declared initially. Force majeure is a legal provision reserved for events that are unforeseeable, external to the parties involved, and unavoidable. It can release parties from a contractual obligation without penalty.

Some have estimated the retraction will result in losses in the billions of dollars for Freeport LNG’s buyers, including big fossil companies like BP, TotalÉnergies, and Osaka Gas.

Browne did not comment on whether there had been a retraction. The company does not mention a force majeure declaration or a retraction on its website.

In its latest news release August 3, Freeport announced it had entered into a consent agreement to take “corrective measures” to obtain approval from PHMSA to return to initial operations in early October, and full operation by year-end. The regulator had given the company a 30-day deadline to consult with them on a consent agreement.

In addition to repairs of the physical infrastructure, the company is “evaluating and advancing initiatives related to training, process safety management, operations and maintenance procedure improvements, and facility inspections,” under the terms of the consent agreement with PHMSA.

Browne did not answer questions submitted by The Energy Mix on the specifics of the corrective measures, but the PHMSA safety order mentions:

• Storage tank transfer to the loading docks, recirculating LNG throughout the transfer area, and loading tanks from the liquefaction trains;

• Qualifications and training of operations, maintenance, and supervisory personnel;

• Whether all supervisory personnel have a thorough knowledge of the instructions for operations, including controls, functions, and operating procedures.

The PHMSA also requires a remedial work plan for review and approval that addresses whether “conditions similar to those contributing to the explosion are likely to exist elsewhere in the facility,” testing and inspection of all pressure safety valves, and periodic verification measures.

Following the announcement of the consent agreement, the company says it expects to resume initially with three liquefaction trains, two LNG storage tanks and one LNG loading dock. This will enable the delivery of approximately two billion cubic feet per day of LNG, which it says is “enough to support its existing long-term customer agreements.” The facility’s normal liquefaction capacity is about 2.2 billion cubic feet per day.

Browne said the company is “currently drawing a small amount of gas off pipeline connections at our Stratton Ridge metering station to fuel a gas-turbine generator… in order to generate and export about 50 MW of power to the state’s electricity grid.”

Freeport LNG is majority owned by billionaire Michael S. Smith. According to Forbes, the Freeport facility took two decades to build, but is now America’s second-largest LNG export operation. Before the explosion it was on track to export 15 million tons of LNG this year.

Despite the recent explosion and fire at the facility, the U.S. Federal Regulatory Commission (FERC) has since approved a separate request from Freeport LNG to increase its production capacity from 782 to 870 billion cubic feet per year to “reflect the project’s actual capabilities.”

In an order issued on July 28, FERC stated “the applicants do not propose any new facilities, construction activities, or modifications to previously authorized facilities.”

FERC announced earlier in July that it would conduct an inspection at the site September 13-15.

Forbes reports that “the destination of cargoes leaving Freeport had shifted dramatically in recent months, flipping from 75% of tankers heading to Asia to nearly 80% now going to Europe.”

Kevin Book, managing director at Washington-based ClearView Energy Partners LLC, told Bloomberg: “In short, natural gas now rivals oil as the fuel that shapes geopolitics. And there isn’t enough of it to go around.”

“It’s a key driver of global inflation, posting price jumps that are extreme even by the standards of today’s turbulent markets—some 700% in Europe since the start of last year, pushing the continent to the brink of recession,” Book added. “It’s at the heart of a dawning era of confrontation between the great powers, one so intense that in capitals across the West, plans to fight climate change are getting relegated to the back-burner.”

“As indicated in the EA (environmental assessment), staff determined that since there would be no construction emissions, and only limited operational emissions of greenhouse gases, specifically CO2, no consultation would be necessary with Tribal governments, nor would there be any localized air quality impacts,” the PHMSA approval order stated.

It compared the project’s estimated 31,185 tonnes per year of operational CO2 emissions to the 5.22 billion tonnes the United States produced in 2020.